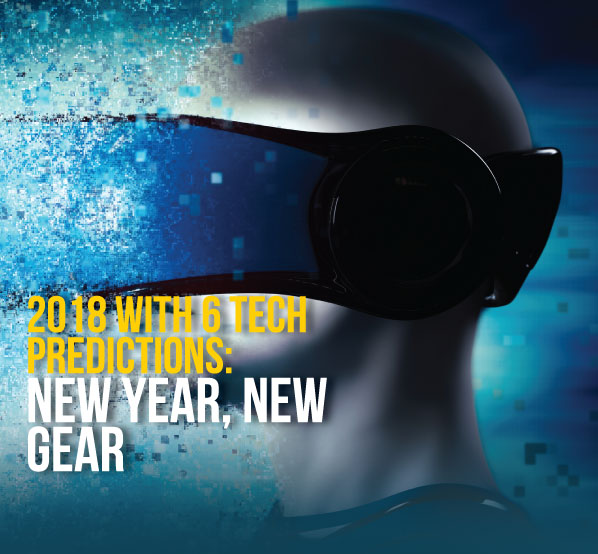 Tech industry has experienced with cool gadgets, predictable upgrades and impressive downfall last year. As a tech savvy or tech nerd, you are definitely waiting for new excitement this year. So what new things may come to you? Here are some predictions for 2018.

Augmented Reality in Your Hand

We heard about virtual reality (VR) that was going to take over the world. But strapping on a headset to look at games or 360-degree videos hasn’t been the hit many had expected. A load of that same technology in 2018 could finally set out mainstream using a gadget you already have and it is your smartphone.

‘Augmented Reality (AR)’ superimposes digital images onto the real word, as seen through your phone’s camera. Smartphones are including powerful AR technology in their devices so that anyone with a fast enough device can try it out. For example, with Apple’s ARKit, iOS apps can map out a room and use realistic, changing lighting to make their objects better blend in with a scene.

It is true we’re expecting for the gigantic break-out app, but AR could continue to change shopping and selfies in the next year. No hulking face-computer is needed anymore.

Robots, this year will finally take to the roads. Oh yes, it’s not that it will revolt against their human overlords (at least not yet).

A number of companies have developed robots that cruise the halls of hotels and hospitals, crack down on crime in malls, or just deliver a burrito a couple of blocks away. These robots use a combination of GPS, sensors and cameras to navigate the world without taking out bystanders.

They’re already facing a backlash. A security robot deployed by the SF SPCA to clear out homeless encampments around its property was reportedly knocked over and smeared with feces by angry locals. And San Francisco recently passed regulations to limit the number of delivery robots on the streets. But these rolling helpers are probably just getting started, if they can avoid falling into fountains.

Smart Homes to Let the Strangers in

Your home, where you live in, is definitely smart. But think, you are not home that doesn’t mean tech companies can’t swing by and drop off your dinner order or a 12-pack of paper towels. ‘Amazon’ kicked this odd category off earlier in 2017 with a service that lets delivery people access your home through a special smart lock. Look for more partnerships between delivery services and smart home technology over the next year.

Let Your Voice Rise in Every Gizmo

Alexa-fever has spread and most of the big technology players are working on their own voice assistants. They’re breaking out of smart speakers and appearing in everything from cars to singing fish. In 2018, Amazon and Google will be fighting to lock you into one voice ecosystem. After Google repeatedly debarred Amazon from including YouTube on the Echo Show, Amazon finally gave in and agreed to Google hardware. Expect similar tugs-of-war over services on the voice platforms. Before the year is up, you may have to declare your allegiance for Alexa, Siri, Cortana or Google Assistant.

Internet Bill You Could Change

Do some of the companies in your area demand more charges for your connection even if slower or faster? Chances are you pay a flat monthly fee for your internet connection now. Some companies charge different prices for faster or slower connections, but don’t limit what you can come in contact.

The recent repeal of FCC’s net neutrality rules have opened the doors for internet service providers to experiment with different pricing structures. In theory you could be charged more for a Netflix and Amazon Prime Video tier, or social media networks could be an additional monthly fee. Any changes are likely to start small, as companies test the reactions of customers and see if they flee to competitors (where there are any).

Most of the smartphone camera upgrades have focused on modifying the actual camera, like packing more pixels or a bigger sensor into a limited space. Now, Google wants you to experiment with its new photo apps and is using computing to take photos to the next level. The Pixel 2 smartphone is able to detect the outline of a subject and throw the background out of focus, and the company recently released a few small photography apps. Look for big improvements in how your photos look, like less noise in low light, and fun new tricks.

Since you are now already in 2018, come and think out of the box. Take your new experience as experiment. Let all your superb thoughts on gadgets be bloomed around. ■