In June 2012, Sheryl Sandberg became the first woman to serve on Facebook’s board of directors. That same year, she made Time’s 100 Most Influential People list. Prior to her work with Facebook, Sheryl was the chief of staff for the U.S. Secretary of the Treasury and was later employed at Google, serving as Vice President of Global Online Sales and Operations.

She is the author of the book Lean In: Women, Work, and the Will to Lead, which explores themes like feminism, sexism in the workplace, and the societal/personal barriers to gender equality in the professional world. It topped bestseller lists and sold more than one million copies. Currently, reports estimate Sandberg’s net worth, which is largely in stock holdings, at over US $1 billion.

Susan earned her bachelor’s degree in history and literature at Harvard University, graduating with honors in 1990. Originally, her plan was to pursue a PhD in economics and work in academia but changed course when she became interested in technology. In 1999, she joined Google as their first marketing manager and worked her way up to senior vice president of Advertising and Commerce. 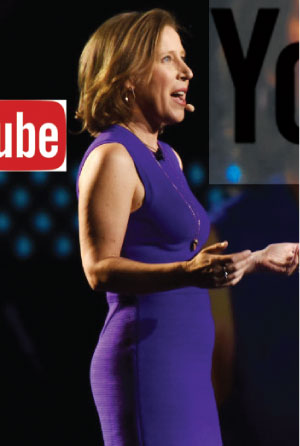 After overseeing Google Video for some time, Susan proposed that the company acquire Youtube (which at the time was a small startup).

Ginni heads IBM, serving in the capacities of Chairman, President, and CEO. She is the first woman to do so. Since 1991, she has held various important roles at the company and was appointed CEO and President in October of 2011.

Meg Whitman has a long and varied career, serving as an executive for numerous high-profile companies. During the 1980s, she was vice president of strategic planning at The Walt Disney Company. In the 1990s, she worked for DreamWorks, Procter & Gamble, and Hasbro. Then, from 1998 to 2008, she served as president and chief executive officer of eBay.

Marissa has been the current president and CEO of Yahoo! since 2012. Prior to her employment with Yahoo!, she worked at Google as an executive and spokesperson for over a decade. In 2013, Marissa was recognized on the Time 100 list; then, in 2014, Fortune‍ magazine ranked her sixth on their 40 under 40 list and sixteenth on their list of most powerful businesswoman in the world.