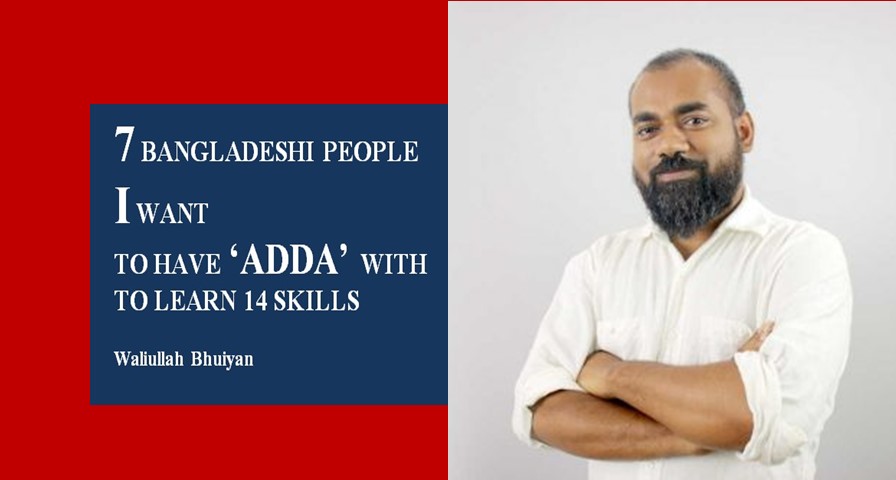 I watched almost every interview of Elon Musk, read all the books, movies and interviews of Steve Jobs. I learned tons of things from them and from their work. But often time, I can’t relate their work and their way of doing things in the context of Bangladesh.

Since I am an entrepreneur in Bangladesh, it’s important to learn how to do things in Bangladesh. So, I really look forward to learning new skills, techniques and strategies from amazing Bangladeshi people. Unfortunately, in Bangladesh, we don’t document enough and study enough of these amazing people’s work, life, strategy, philosophy etc. So, often the only way to learn from them is to have a long ‘adda’ with them. But you have to be very lucky to have such an opportunity. Yes, you may occasionally meet them in an event, say one or two words, or get the chance to listen to their speech or interview. But that will never come as close as having a relaxed open hanging out event.

A couple of years ago, I made a secret list of Bangladeshi people (still living) with whom I want to have an ‘adda’. I want to learn from their experience, get to know how they make a decision in difficult times, how they keep their courage, how they inspire and lead, what’s their ‘secret of life’.

I decided to publish this list on the birthday of one of my favorite person on the list (you find which one). And apart from all the amazing character traits and achievements from all these people in my list, I wanted to learn a few key skills from them.

(This is my personal wish list. And I appreciate to deal it like that. You may have different people in your favorite person list. So, before you start making any comment, pass any judgment – I would ask you to STOP)

I’ve read all the books written on BRAC and him, watched all of his interviews, I worked in BRAC for almost 5 years, had the opportunity to meet him in person. The things that I want to learn from him is how did he manage to identify the early employees and give them the vision to change the country. We celebrate Steve Jobs, Jeff Bezos, Jack Ma or Elon Musk. But he is probably more visionary than them. Creating an organization like BRAC after our liberation war in 1971, and elevating it to such scale, diversity is simply ‘awesome’.

It’s natural that Dr. Yunus and Sir Abed will come side by side. Apart from the Noble Peace prize and all the achievements of Grameen and all the Grameen Initiatives (including GrameenPhone), what I want to learn from Dr. Yunus is about Personal Branding. He is one of the most popular Bangladeshi around the world. How he popularize the concept of ‘Social business’ is also something I want to learn, give me the understanding of popularizing a new concept or idea.

Mustafa Monwar is so many things – but most importantly he is the father of puppet industry in Bangladesh. His character Parul from popular children TV show Moner Kotha was the inspiration behind Meena. During 1971, he started doing puppet play in the refugee camp in India where Bangladeshi people were taking refuge.

He created Biswho Shahitto Kendro in 1978 to popularize promote reading habits, enlightenment and progressive thinking among student and the general public. It will hard to find people who were kids back in 1990s who were not a member of the Travelling Library of Biswho Shahitto Kendro. I started Porua project back in 2016 – a school library project with a vision to set up one library in every school in Bangladesh (we already covered 350 schools out of 100,000 schools). I want to have an adda with him to learn how to popularize the movement and promote volunteerism among youth with certain idea.

I was in BRAC when Kamal Kadir, CEO of bKash pitched his idea of bKash to Sir Fazle Hasan Abed. We heard stories of that meeting. If I get the chance, I want to ask him about that meeting, how he first pitched his idea to investors to change the course of a nation and impact every single household within just a few years. I can use one or two tricks from him for my investment round.

I don’t think there will be any better teacher than him to teach me the courage and team building. One of the best captains in the cricket world. If I get the chance to have an add with him, I will ask how he gathered his courage to go on even when his body was on the verge of giving up. How he keeps his team motivated?

Running a country is difficult, running Bangladesh is even harder. Politics aside, I want to meet the ‘Person Hasina’, not ‘PM Hasina’. I believe there are few people in Bangladesh who understands Bangladeshi people’s psychology better than her. She is the master of long-term strategy and collaboration. If I ever get to have an adda with her, I would love to learn how to make long-term strategy, getting people on-board through collaboration.

And a Bonus Entry

If you don’t know them, I feel sad for you. Read here. The girls of Kolsindur, a remote village near the Indian border in Mymensingh, set their footprints in the international level by making history for Bangladesh by winning our first-ever international title. They emerged as the champions in the Asian Football Confederation Under-14 Girls’ Regional (South and Central) Championship. They won the same title this year for the second time in a row, remaining unbeaten, and more impressively, defeating India for the first time ever. The Bangladesh girls netted a record 25 goals in the tournament. And 7-8 team members of the winning team was from that school team.

If I ever get the chance to meet them, I will ask them how did they handle all the pressure from their surroundings, continued their hard work and finally emerged as victorious. These were 12-13-year-old kids. How on earth did they deal with all this?

I believe I will grow and be more mature if I get to know these people more. I wish I have the opportunity to have ‘adda’ with them, not just ‘meeting’ them.