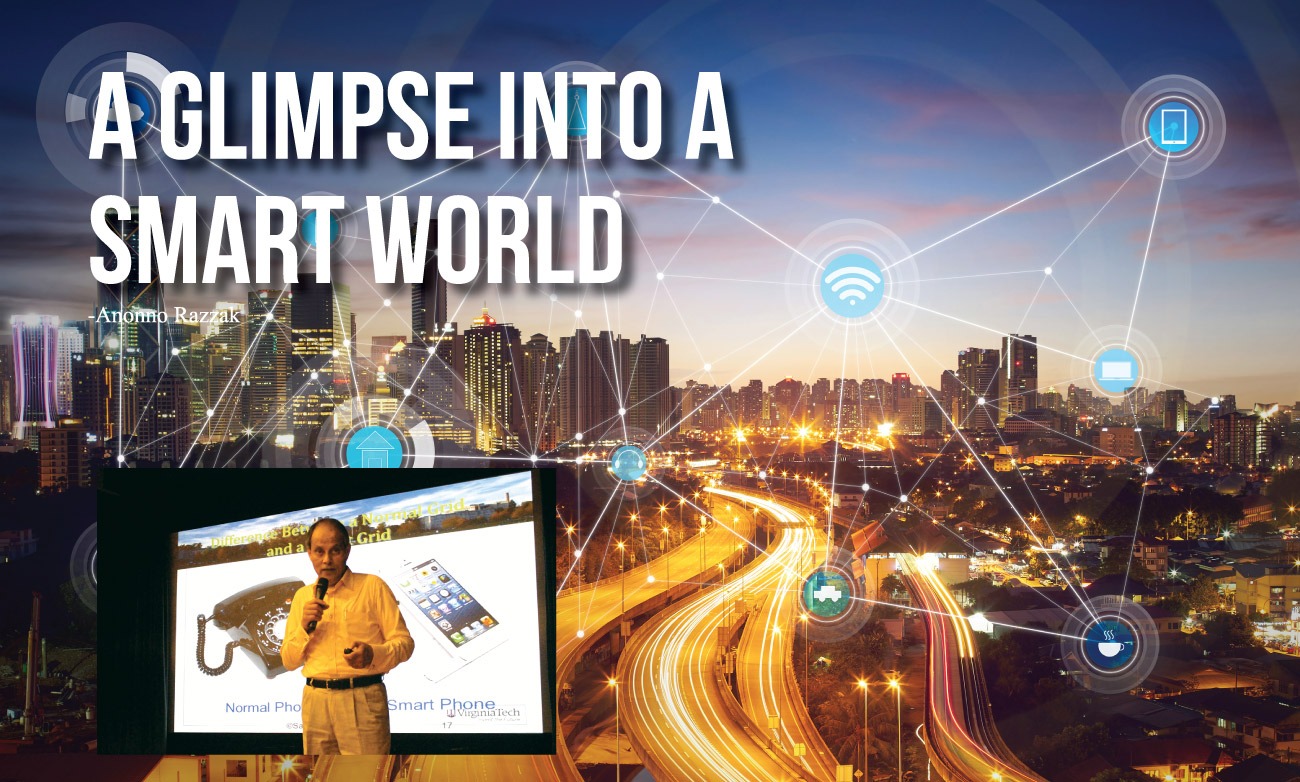 On the eve of 5th July, 2017, Professor Saifur Rahman addressed a large crowd of people at Grameenphone’s headquarters in Bashundhara, Dhaka, with a lecture on how the Internet of Things (IoT) was playing a huge role in building a Smart City Connected Community.

Rahman completed his PhD in Electrical Engineering from Virginia Polytechnic Institute and State University, and he is the founding director of Advanced Research Institute at Virginia Tech, USA. At the university, he is a Joseph R. Loring professor of computer science and electrical engineering.

“You may have heard of a Smart Grid, but you may be confused about the details behind it,” said Rahman.

“Today, I want you to get a clear idea on what is a smart grid and what role it plays in your life.”

“First, there’s the smart buildings, then smart campus, smart city, and then the smart grid. That’s how the thing builds on,” added Rahman.

“Look at the building you are in right now, it has an automation system,” said Rahman. “It measures the occupancy based on the airflow and the temperature is set accordingly to adjust everyone. We’re a room full of people and the room is cool and has proper adjustable lighting. These are all smart devices with lighting combo, smart tasks, temperature controls, etc. You need all that for functioning properly inside.”

“The Grameenphone management wants to make sure that you do your best while you are at this building. So, their job is to make sure that the building is comfortable and not so noisy. That is what is meant by productive users,” added Rahman. The value of having a smart building, explained Rahman, is that it helps you save up a lot of energy and cost. If worked properly, it can save 30 percent of your water supply. We usually spend a lot of water on watering plants and rags around the building, but a smart building will soak the rain water in the roof and make that water available for irrigation around the grass and flower pots in that property. With proper controls, it can also save up to 40 percent of the energy usage, and reduce maintenance costs by 10 to 30 percent. 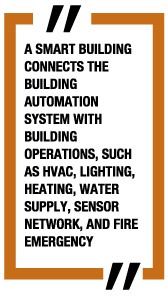 For example, added Rahman, imagine if your air condition system fails and you have to call an outside technician, that’s about 3 to 4 days of time and cost sweat. A smart building has an algorithm called ‘predictive maintenance,’ where we can predict certain issues before there’s a failure, and we call the technicians to fix it, thus saving cost on replacing and managing time efficiently.

“A set of these smart interconnected buildings makes a smart campus,” said Rahman. “There is real time data on usage profiles and buildings communicate with each other, so that there’s a systematic allocation of electrical resources, to minimize peak load and avoid power outages.”

“I live in Baridhara and have to face loadshedding at least twice a day, and that’s frustrating, especially for those who may not have air conditioner and heavy usage systems,” added Rahman. “A smart campus or building would put sensors in each apartment, so that if one particular house is reaching peak limit, they can be forewarned to switch off the A/C or T.V for an hour or so, and if they don’t comply, they face load shedding for a while. The others don’t need to suffer.”

“An example of smart city planning can be looked at through smart parking,” said Rahman. “A lot of people park randomly on the streets and then perhaps forget where the car is, maybe they’re new to the place or parked in an emergency. If there’s an app, then the app can direct them to the exact location of their parked car. With vehicle tracking, people can know where their car is even if it’s stolen, or let’s say it’s a self-driving car, so they can track where it parked itself. It’s very efficient.”

“Another example of a smart city system would be smart traffic,” added Rahman. “Let’s say there’s a sensor at the traffic light that tracks how many people are waiting in line to cross the road. If there are about 5 to 6 people, it will stop the traffic to let them cross, however it won’t do so just for one person. Similarly, if there’s a fire engine or an ambulance passing, it will track through the sensors and turn the traffic light green for that particular lane to let them pass easily.”

“All of these can happen because of the IoT devices, people are connected to each other and their devices through the internet, and this can help us build a smart and connected community,” added Rahman. 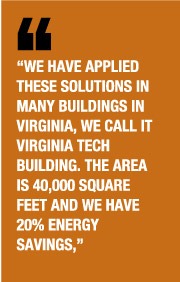 “Now let’s talk about the grid. What’s a grid? It’s a network. A power grid is a power network. Am I talking about building a smart grid here? No, a grid is already smart, it has several sensors and controls, and Bangladesh has it. The issue is lower level distribution network in our country, that’s not smart yet, and that’s the focus of the smart grid today,” explained Rahman.
“We need to make the smart grid smarter, safer, reliable, and more cost-effective using advanced sensors, communication, technologies, and distributed computing. It is expensive, yes, but it can do a lot of work for you and it can reduce the expense in other sections.”

To give an example, let’s take a look at land phones and smartphones, said Rahman. If you just want to make a call, why invest in something more expensive? Because with a costlier handset, you’re getting more benefits too, you can access the internet, your Facebook and YouTube, and make calls, read newspapers, connect to people internationally at a lower cost, and so much more. This is a power grid. This is a smart grid. This is why we need to invest in them.

According to Rahman, there were about 6 to 7 billion IoT devices in 2010, and he believes the number will rise to an expected 50 billion by 2020, though he hopes that it can rise higher to a 100 billion devices. He said that if every operating manager could have about 60 million IoT devices, he could efficiently manage an entire smart grid.
“My target is to create a dumb smart building so that through my devices I can control my building smoothly,” said Rahman. “What I mean is, through IoT devices I can take full control for my building so that all the problems and their solutions are all within the same building and its controls.”

Rahman then introduced the audience to Building Energy Management Open Source Software (BEMOSS), which is an open source platform for energy management, where his team has deployed software solutions using communications technology like Ethernet, WiFi, BACnet, ZigBee, Smart Energy, Modbus, OpenADR, etc., that help in connecting to every building.
“You can have all power to control due to your devices. This is your all scalability, a great solution for your big buildings,” said Rahman. 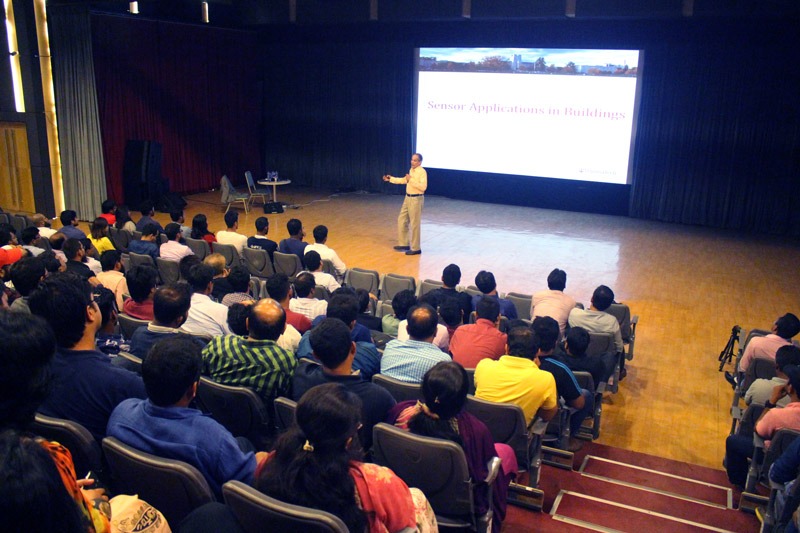 “We have applied these solutions in many buildings in Virginia, we call it Virginia Tech Building. The area is 40,000 square feet and we have 20% energy savings,” added Rahman. “A classroom in Virginia Tech gets environmental sensor, thermostat, motion sensor, plug load controller, and sensor for CO2, noise, temperature, and humidity. We have these so that the classroom can be adjusted with absolute freshness and comfort, and we can provide the most comfortable environment to work in.”

Rahman then provided further examples on how the BEMOSS system had been enhanced to ensure maximum energy savings and efficient work environment.

“We’ve got sky lights so that they bring in more sunlight and our electrical light gets dimmer, by doing so, we save 30 percent of the electricity on that particular floor. Our street lights turn on at sunset and turn off at sunrise through the sensors,” said Rahman. “Our parking lots? They have motion sensors too. So lights turn on when cars come in and if there’s a long period of inactivity, the lights go off. This also ensures security as anyone who tries to sneak in may not be prepared for the sudden sensors to pick up on their movement.”

Overall we save about 75 percent of the building’s energy, and that’s a grand step,” added Rahman. “We have added more features to make the BEMOSS platform more effective, we have given rooftop air conditioning plug load, solar batteries, lighting load, security cameras, and power meter. All of them can be seen by the BEMOSS platform and we can control it as we need it.”

Rahman ended his lecture on a positive note, stating that he hoped to see these smart integrations being utilized further and to their full capacity in Bangladesh, and his words were met with a thunderous applause from the audience.