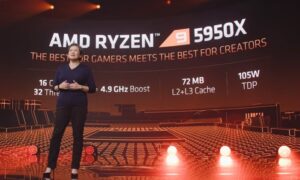 AMD has officially unveiled its all-new Ryzen 5000 series of desktop processors. Based on the new Zen 3 architecture, AMD is claiming its new lineup has the “Fastest Gaming CPUs in the World.” The new series is headed by the Ryzen 9 5950X, offering up to 16-cores with 32-threads and 72MB of cache.

AMD has compared its new lineup with its previous Zen 2 architecture-based CPUs as well as the Intel Core i9-10900K. The 12-core 5900X processor offers up to a 26% generational uplift in gaming performance and a 19% generational increase in instructions per cycle (IPC).

As per the press release, the existing AMD 500 series motherboards will support the new Ryzen 5000 Series desktop processors with a simple BIOS update.

The company hasn’t shared performance numbers for the Ryzen 9 5950X but claims it offers the highest single-thread and multi-core performance of any desktop gaming processor.

AMD Ryzen 5000 processors have been shown demolishing single-threaded Cinebench R20 results. It’s not just synthetic results either, AMD has shown the Ryzen 9 5900X is some 28% faster than Zen 2 in Shadow of the Tomb Raider, with some similar gains in other games too.

AMD Ryzen 5000 processors will be available to buy from November 5, 2020 worldwide. That’s AMD’s official line on the Zen 3 release date, and that only leaves just under a month until the big day arrives.

The chipmaker’s CEO, Dr. Lisa Su, confirmed it was “on track to launch next-generation Zen 3 CPUs and RDNA 2 GPUs in late 2020”, and it’s living up to at least half of that promise.

“We quickly adapted our global operations to navigate pockets of supply chain disruption and addressed geographic and market demand shifts caused by COVID-19,” Dr. Lisa Su said, according to PCGamer.

AMD Ryzen 5000 processors will be available to buy from November 5, 2020 worldwide. That’s AMD’s official line on the Zen 3 release date, and that only leaves just under a month until the big day arrives.