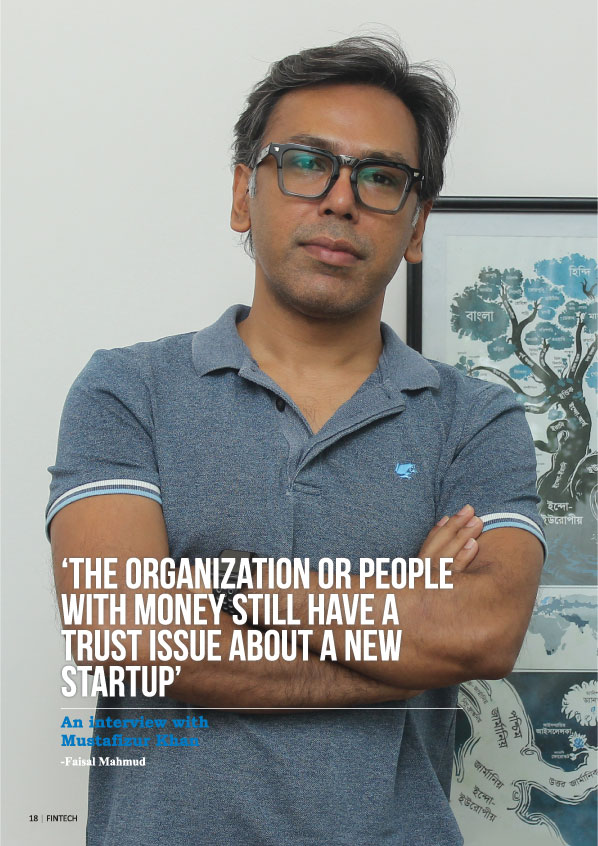 Mustafizur Khan is an entrepreneur, angel investor, startup community organiser and a marketer with over 17 years of experience of heading teams across diverse industries in Asia. He started his career as an entrepreneur managing an engineering SBU and later managed brand like HSBC in several countries. He co founded coolest co-working space in Dhaka, crowd funded and directed a documentary on tech startups in Dhaka which later pivoted to local a business news site called Startup Dhaka. He is passionate about technology and studies film in his spare time. He holds a double major in business and fine arts from COE College USA and an MBA from Nanyang Business School in Singapore.

Mustafizur Khan speaks in a mellifluous voice. When he opens his mouth, you don’t find it difficult to listen to him spontaneously. In his small yet stylishly decorated office of SD Asia at the downstairs of three storied house by the side of Banani Lake, Mustafizur talked with Fintech recently. During that conversation, the issue of the formation of SD Asia and the challenges of Dhaka’s startup scenario were discussed. Here is an excerpt of that conversation for the Fintech readers.

FINTECH: How did the idea of forming SD Asia spring up?

MK: The story of SD Asia started back in January 2013. At that time, the first startup related event happened in Bangladesh. This happened in line with a global event called startup weekend. That event was quite big and large. It was simultaneously organized at around 23 countries across the globe.

I just came back from Singapore at that time. I went to that event and there I met Fayaz Taher, the other co-founder of SD Asia. That event kind of opened my about the potential of Bangladesh. Before that I was sort of an alien to what was actually going on in Bangladesh as I was in abroad for long for my study and jobs. After that I attended two other startup events in the next few months and I decided to travel around the

region to get a proper understanding of the startup scenario.

So I travelled in Singapore, Malaysia, and Indonesia and tried to get some perspective of what was happening in the startup arena in those countries. I found that the startup culture has already picked up in those regions. Bangladesh was little late in joining the bandwagon but it of course was on the way of hopping into the startup juggernaut.

I searched and found that despite lots of struggles, issues and barriers, there were a number of good success stories in Bangladesh. So after discussing with Fayaz, we decided to do a documentary on Bangladesh’s potential and decided it to disseminate the documentary in viral manner through internet. The core idea of the video was to showcase Bangladesh as a potential startup destination to the world.

We created a crowd-funded documentary called ‘Startup Dhaka’. We raised about $9,500 through a crowdfunding platform called Indiegogo. Most of the sponsors were non-residential Bangladeshis. They believed in that idea and that’s why they supported that. After the success of the documentary, we wanted to expand our platform. With that idea of expanding, we planned to create a news website called SD Asia which will publish news stories about the startups of Bangladesh as well as of other countries across the world.

MK: After the launching of the website, we started doing lots of events related with startup. In the last two years, we have arranged two major events called innovation extreme. In those events, we tried to provide the startups a platform to showcase their products to the venture capitalists (VCs) as well as to other angel investors. In those events, we also brought in successful startups to share their stories with others so that they could get motivated.

I believe that those events were successful because there many startups got access to VCs and got the chance to have a bilateral meeting for the first time. In Bangladesh, we have just a handful of VCs and they are not functioning like real VCs rather like a private equity firms. So it was obviously a new and exciting experience for them. They were not readily funded because the idea was still very new to Bangladesh.

FINTECH: How did SD Asia come up with the GP-Accelerator program with Grameenphone?

MK: After roaming into the startup scenario for couple of years, we started the GP-Accelerator program. The good thing was that it was who Grameenphone contacted us as they were impressed with our works. They earlier saw our portfolio and learned about what we were doing so during our first meeting with Grameenphone, we explained the ‘why’ part.

We told them we work as angel investors and we have experiences in both industry scenario and startup scenario in Bangladesh. So we arranged an internal event for them where we called up a few startups to showcase their products. After the program, Grameenphone got interested and let us know that they wanted to get involved with us in nurturing the startup. The idea of creating an accelerator thus was born.

FINTECH: Was it the first accelerator program in Bangladesh or there were others when the GP Accelerator was born?

FINTECH: Is the outcome of the accelerator program positive? Are those startups doing well?

MK: I would say the startups that have been graduated from the accelerator program have attained success in terms of growth and valuation. If you look at the comparative pictures of the startups before and after they entered the accelerator program, you will be able to spot the obvious escalation of their companies in many aspects. The most successful startup from the GP-Accelerator is obviously Sheba. Its current valuation is almost $5 million. So they had really been able to learn from the accelerator program. They understand the process of business growth, what is required to escalate the scale of the business, what are the needs in the market and what are needed to attract the investors to invest on them. So within a very short time, they are being able to reach to a successful height.

The relationship between the startups and SD Asia and Grameenphone don’t end after the startups graduated from the accelerator program. Since we take equity in the company, we follow up with the startups time to time. We also try to support them with our mentorship and experience if they need so.

FINTECH: What are the main problems that startup companies are facing in Bangladesh and how can they overcome those problems?

The first problem occurs during the idea stage. When people come up with the idea, very few of them actually think about its viability, especially its business viability. They just fall in love with idea without thinking about its market potential and that becomes their Achilles heel.

The second problem is the products market reach. They really don’t try to think about the problem they are trying to solve-whether there is an actual demand for it or not. People will not pay for something which will not give them the solutions to their real problems. Very few startups actually try to get the pulse of the market and come up with a solution that can solve real problems of people.

Lastly, for a country like ours, funding is always an issue for a startup. The organizations or people with money still have a trust issue about a new startup. They always want to safeguard their 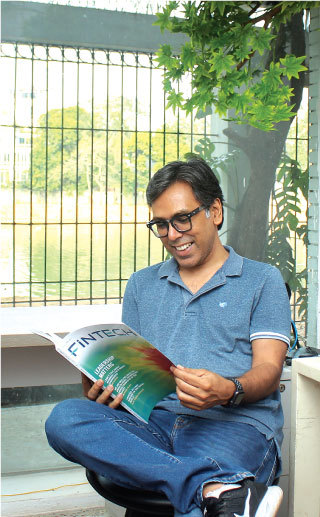 FINTECH: What investors basically look for in startups?

MK: Generally speaking, investors do not really go for great ideas. What investors look for is a great team. Ideas can be copied, it’s the execution part that makes the difference. If I look at the same idea but five different teams, I would look for the best team to execute the idea. I would measure the chemistry between the team members and the team dynamics as in how they complement each other. Many startups fail within the first six months for mainly two reasons. They either don’t have enough money or the team breaks down because they can’t agree with each other. So if there’s one thing that all investors look for across the globe, it is the team.

MK: Co-working space is a very challenging idea in terms of business model. So basically we rent a place against the name of our portfolio company and then rent the spaces to other companies in different terms. The problem was that we started the concept very early. The market was not ready for that but I believe it is now. There are few other co-working spaces in Dhaka. I think now people are getting comfortable with the idea of sharing space with others.

FINTECH: What will be your advice to the young entrepreneurs out there?

MK: Being an entrepreneur is different from getting a job. To get a job you need certain qualifications. The beauty of entrepreneurship is that even if you are in high school, you can start being a businessman. So I would advise young entrepreneurs to start early. If you start at young age, obviously you are going to make a lot of mistakes but you will learn from those. But you won’t pay a heavy price for failing because you can bounce back and start again.