You are here
Home > Cover Story > BANGLADESH ICT EXPO 2017: THE DREAM OF MAKING BANGLADESH THE NEXT HARDWARE MANUFACTURING DESTINATION 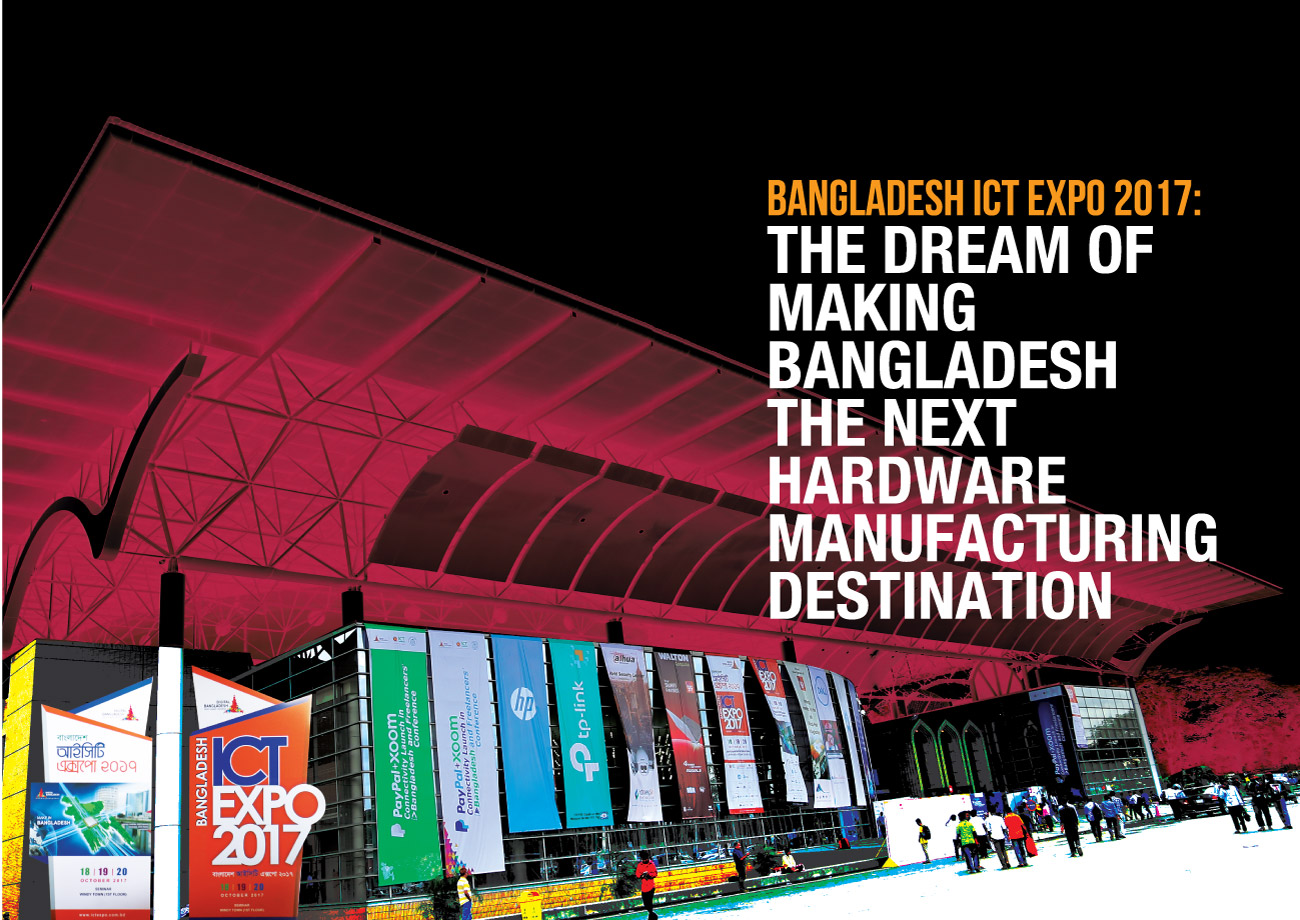 It all started in 2010. Intel built its $1 billion chip manufacturing plant in Ho Chi Minh city, Vietnam and the country’s coveted electronic manufacturing dream had begun with that. Their days of complete dependency on textile and food export started to go away and people there were getting ready to say hello to a hi-tech Vietnam.

Within a year, in late 2011 and early 2012, the dream started dwindling, as the economy was shot and there was an environment that didn’t play well for foreign investors, and that was turning people off.

The latter half of 2012 however had seen a change, with electronics factories popping up and all the tech giants across the world have shifted their assembling and manufacturing plant to Vietnam. The Reason: price competiveness.

The main draw for the tech companies including Intel, Samsung and Nokia from Vietnam was the low labor wages. In some cases, Vietnamese workers could be paid as little as one-third of Chinese labor costs. Cheap labor was Vietnam’s new brand.

In this era of globalization and free market economy, Bangladesh has been able to take the mantle of ‘cheap labor’ brand from Vietnam’s hand and experts concerned believe that time has come to take the tech products manufacturing business from Vietnam as well.

With the dream of making Bangladesh a IT hardware manufacturing nation, the three day long Bangladesh ICT Expo 2017 was organized at Bangabandhu International Conference Center (BICC) from October 19-21.

The expo with the tagline ‘Make in Bangladesh’ was jointly organized by the ICT Division of the government, Hi-Tech Park Authority and Bangladesh Computer Samity (BCS). 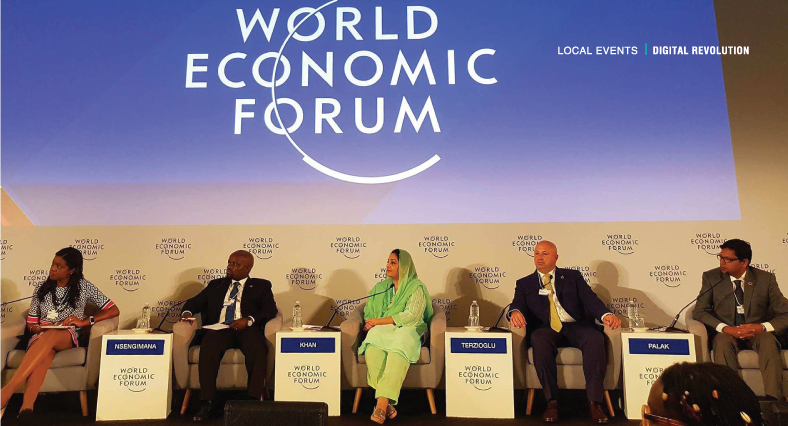 The ‘Make in Bangladesh’ dream

The organizers of the expo came up with the theme ‘Make in Bangladesh’ from the ‘Make in India’-an ambitious campaign launched by the Indian Prime Minister Narendra Modi in 2014. The Indian Premier had launched it with an aim to turn India into a global manufacturing hub.

The fact however is one doesn’t often come across the tag ‘Made in Bangladesh’ on any piece of technology, including computer hardware. Because, as a country, we are not hardware manufacturers—rather, we mostly import and, to a small extent, assemble.

That ICT expo was supposed to be a stepping stone into the field of hardware manufacturing arena for Bangladesh. Ironically, it was not. 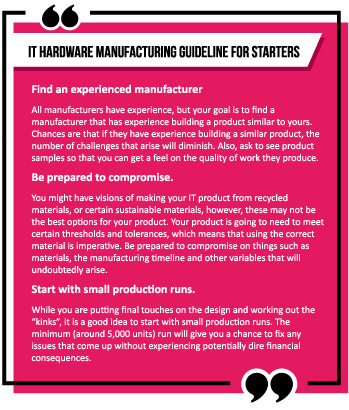 The three day expo became a polished version of Laptop Fare, which too is usually being organized by the BCS, the platform which mostly comprised of seasoned computer hardware importers. The BCS Expo organizers however said that the IT manufacturing revolution will not take place overnight.

But they believed that it would take place soon.

The State Minister for ICT, Zunaid Ahmed Palak believed that the hardware revolution has already started. He said that the ground breaking ceremony of the two blocks in Hi-Tech Park took place at February 28 this year. One Srilankan and one Indian company have already signed agreement to set up their hardware manufacturing plant in the Hi-Tech Park.

“More of such companies will come very soon to set up their plants. We are having negotiations with some of them,” Palak told a press conference after that.

The State Minister believes that Bangladesh will become the nest hardware manufacturing destination and he had no doubt about it. When asked about the reason behind his string conviction, he came up with the answer-price competiveness. 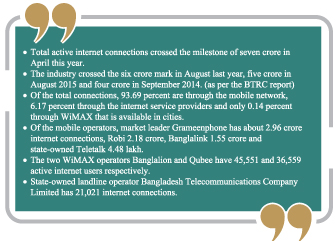 Referencing the latest survey of Japan External Trade Organisation (JETRO), he said that Bangladesh has continued to be an attractive destination for Japanese companies to do business due to its lower production cost and labour wage compared to those of 19 countries in Asia and Oceania.

The JETRO study said in comparison to Japan, the cost of production in Bangladesh is less than half, (49.5 percent), while it is 81.9 percent in China, 73 percent in Vietnam and 80.6 percent in India. 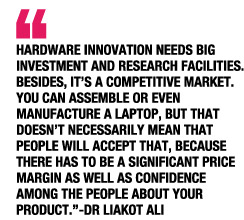 Bangladesh is far ahead of Vietnam, Sri Lanka, Thailand, and Pakistan on the cost indicator and is in a better position than Sri Lanka, Pakistan, Indonesia, Cambodia, India, the Philippines, and China on the labour wage indicator.

He also said that aside from the manufacturing destination of global tech giants, Bangladesh could manufacture its own hardware and creates a brand of its own. “Our Walton is a success story. People have accepted their products with open hand. We can create more Waltons”, he said. 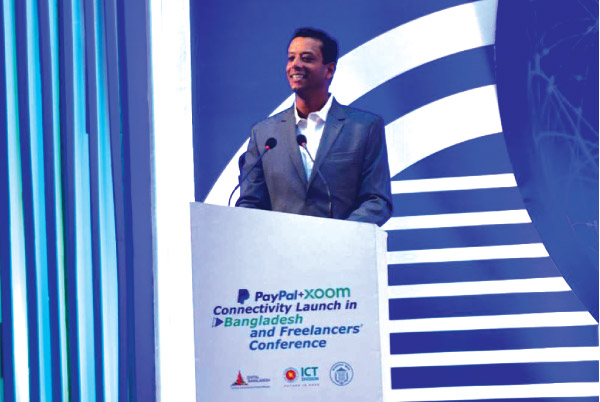 What needed to be done?

Dr Liakot Ali, director of the Institute of Information and Communication Technology (IICT) of BUET however thinks that becoming a hardware manufacturer is not an easy task. “It needs a large establishment. The government needs to devise a policy for that.”

Dr Ali pointed out that as a country, “We are yet to become IT hardware manufacturers. For becoming one, we first need to have a skilled workforce with technical know-how. The problem is, in Bangladesh, the technical education is losing its popularity.”

Dr Ali said that most of the Bangladeshi hardware brands even don’t manufacture their products here rather they go to China for doing so. 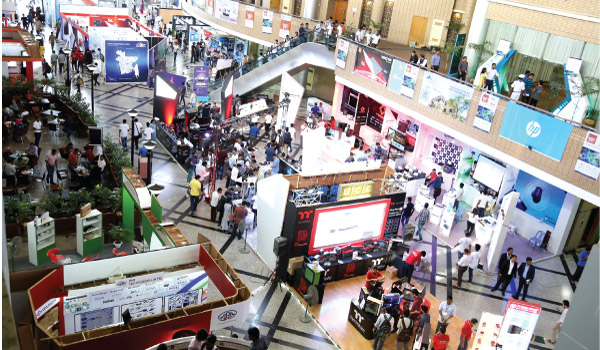 “Hardware innovation needs big investment and research facilities. Besides, it’s a competitive market. You can assemble or even manufacture a laptop, but that doesn’t necessarily mean that people will accept that, because there has to be a significant price margin as well as confidence among the people about your product.”

The BUET professor explained that the state-owned Telephone Shilpa Sangstha Ltd (TSS) had come up with a locally-made laptop named ‘Doel’ just five years ago. “But people did not accept it as its battery life was not good. TSS, however, does have the facilities to produce computer hardware.”

“To be a manufacturer, you first need to provide significant amounts of money as grants for research and development so that you can come up with innovations. All the large hardware producers—Intel, Dell, HP—had a string of industry-university relationships, through which innovations occurred.”

The current and former presidents of Bangladesh Computer Samity (BCS) also agreed that to take the country’s computer hardware sector into the fast lane, there is no other way but to go in for industry-university partnership.

Ali Ashfak, the incumbent chief of BCS, AHM Mahfujul Arif, Faizullah Khan and Mostafa Zabbar, the former presidents, all said that there should be a strong relationship between the industry and universities.

Mostafa Zabbar, the founder of Bijoy Keyboard, pointed out: “All the greatest technological innovations in the world have occurred because of industry-university coordination. Without funding research and development activities in the universities, we cannot come up with new technologies, and without new technologies, we cannot have an edge in the competitive market of computer hardware.” ■