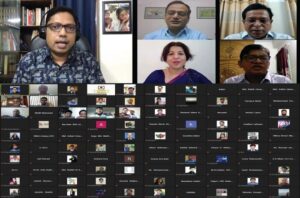 Intending to increase the knowledge and skills of startups in Bangladesh as well as develop a digital startup ecosystem, Bangladesh-South Korea is going to organize the “ideaTHON” contest in a joint venture.

This contest is being organized by iDEA project of Bangladesh Computer Council (BCC) under the ICT Division with the slogan “Let’s Start You Up”. The event is co-organized by the Korea Productivity Center (KPC) and the Korea Invention Promotion Association (KIPA). In addition, the ICT Division and the Bangladesh Computer Council of Bangladesh and the Ministry of Justice of South Korea and the Global Start-up Immigration Center of South Korea are partnering with the event. The top 5 innovative startups will be announced as the winners at the end of the final selection of this contest organized.

The winners will receive 6 months of special training, incubation, funding & connecting support with VC companies in South Korea also with the international patents, copyright and trademark assistance. Besides, the best 25 teams will get special mentoring and certificates.

State Minister of ICT Division Mr. Zunaid Ahmed Palak inaugurated the Contest as the Chief Guest of the online inauguration program at 3 pm on September19, 2020.

He said, “The main goal of such events is to encourage and motivate youth. As a result of this event, the friendly relations between Bangladesh and Korea will be taken to a different level. The iDEA project was established under the BCC of the ICT Division with the best guidance and inspiration of the Prime Minister’s ICT Affairs Adviser  Sajeeb Wazed”.

State Minister further said, “We are working to build the digital Bangladesh of the dream of the Prime Minister Sheikh Hasina. We are also working to build a developed economy based on technology-based knowledge. We started this journey after the December 2008 elections. The ICT ecosystem that we have been able to build step by step since 2009 has resulted in us building a skilled human resource and creating employment for 1 million young people”.

“The number of internet users in the country has been around 10 crores 36 lakh and we have been able to take fiber optical cable to the union level of the country. In order to bring our government’s digital services to the doorsteps of the people, with the good advice of the Prime Minister’s ICT Affairs Adviser Mr. Sajeeb Wazed, we have been able to bring more than nine hundred services in the hands of the people through different mobile applications including our My Gov app”, said Palak.

At the same time, ICT export industry has been built with only 26 million dollars about 11 years ago. At present, it has crossed nearly a billion dollars and our target is that we will be able to cross five billion dollars by 2025. And the inspiration and philosophy that is the root of all these things are given to us by the Father of the Nation Bangabandhu Sheikh Mujibur Rahman.

The senior secretary of ICT Division Mr. N M Zeaul Alam PAA was present as the special guest on the occasion and thanked the organizers for organizing such an event. He also hoped that by connecting Bangladesh with the world’s startup ecosystem, it would be possible to bring in foreign investment and also enable startups to bring in foreign investment.

The executive director of Bangladesh Computer Council (BCC) Mr. Parthapratim Deb was present as the special guest and he said that this time our startups in Bangladesh will get the opportunity to take training abroad. The Korean government has cooperated with us extensively, so he expressed special gratitude to the Korean government.

The managing director of Startup Bangladesh Limited Ms. Tina F. Jabeen was also there as a special guest. She said that the best startups in the country will go to South Korea, so special attention should be given to the selection process, judges and selection criteria to ensure that qualified startups can go.

Bangladesh Garments Manufacturers and Exporters Association (BGMEA) President Dr. Rubana Huq was present there as the Guest of Honor of the program. She appreciated the different steps taken by the government for the welfare of startups and wished the startups of the country well.

The event was presided over by the project director (Additional Secretary) of the iDEA Project Syed Mojibul Huq. He said that ideaTHON would encourage young innovators to create innovative IT-based solutions. Besides, providing international standard training and mentoring to entrepreneurs in overseas environments will make them more skilled which will in turn play an important role in their business future.

The Registration for the ideaTHON contest started on September 19, 2020. Online campaigns will be organized in all divisions of the country.

As part of this campaign, alumni of more than 30 public and private universities of the country and different trade associations including BASIS, BACCO, BCS, ECAB, ISPAB are being connected. Interested tech-based Bangladeshi startups may complete the online registration to take part in this competition.

However, no individual can participate alone. A team can apply to have a minimum of 2 members and a maximum of 4 members including the team leader. In addition, those who have completed a Bachelor’s Degree or Masters or MPhil or Ph.D. in the field of educational qualifications or have appeared in the graduation or equivalent examination of any educational institution in Bangladesh recognized by UGC can apply. It should be noted that the age of the applicants should be between 22 to 39 years on 19 September 2020. The last date for registration to participate in ideaTHON is November 21, 2020 (Saturday). For details and application, interested applicants need to visit – http://ideathon.startupbangladesh.gov.bd/

Note, last year, a Memorandum of Understanding (MoU) was signed between the Ministry of Justice (South Korea), ICT Division (Bangladesh), Korea Productivity Center (KPC) and Korea Invention Promotion Association (KIPA) at the Seoul International Innovation Fair 2019. According to the MoU, 5 startups in Bangladesh will get comprehensive incubation support from KPC under the Global Start-up Immigration Center of South Korea. A delegation of iDEA project with the theme Startup Bangladesh led by Kazi Hosna Ara, Deputy Project Director of iDEA Project participated in it.