A Bangladeshi volunteer, Arefin Rahman Himel is recognized by Queen Elizabeth II at the 37th Commonwealth Point of Light, in honor of his “exceptional service” in raising awareness of the hereditary blood disorder Thalassemia across Bangladesh.

In a press release, the British High Commission says, Himel is the founder of ‘Let’s Fight Against Thalassemia’, a project that sensitizes the public about the hereditary blood disorder which affects the production of red blood cells, was presented on Mar 23 at a Commonwealth Big Lunch reception this year.

He is honored at the lead-up to the Commonwealth Heads of Government Meeting in London on April 19 and 20.

“It is a great privilege and honour to receive the Commonwealth Point of Light Award, offered to me by Her Majesty the Queen as the Head of the Commonwealth,” Himel said in a reaction.

“I was very surprised to receive such a prestigious award. The award shines a light not just on my own volunteer work but the wider work of young volunteers across Bangladesh,” he was quoted as saying.

Himel is the founder of ‘Let’s Fight Against Thalassemia’, a project that sensitises the public about the hereditary blood disorder which affects the production of red blood cells.

Since 2010, Arefin has held 165 events across ten districts in Bangladesh, educating more than 10,000 young people on thalassemia carrier detection and blood donation programmes, the British High Commission said in a statement.

Arefin, with the support of his team of 250 volunteers and 50 doctors, has also created an app called ‘ABC of Thalassemia’ to further educate the people about the potentially fatal disease.

Each Commonwealth Point of Light will receive a personalised certificate signed by the queen as the head of the Commonwealth.

The British Council director and the British deputy high commissioner handed over the award certificate to Himel recently.

The Commonwealth is a grouping of 53 nations who had British colonies. Together it is aimed at promoting prosperity, democracy and peace.

Thalassemia is a hereditary disorder which results in excessive destruction of red blood cells leading to anaemia. The symptoms include paleness, weakness, frequent infections, loss of appetite and stalled growth, which appear within two to five years of age.

According to estimates, Bangladesh has 11 million thalassemic carriers, which means one in every 16 Bangladeshi is a carrier of this disease.

Silent carriers contribute to the number of patients, as thalassemia gene carriers or ‘minors’, who on marrying each other, have 25 percent chance to give birth to a thalassemia major baby, which is avoidable.

In a congratulatory message, KanbarHossein-Bor, UK Acting High Commissioner in Bangladesh, said he is delighted that Arefin’s work and tremendous dedication and perseverance in raising awareness about Thalassaemia in Bangladesh has been recognised.

Since 2014, Arefin has helped educate more than 10,000 young people across 10 districts on topics such as Thalassemia carrier detection as well as blood donation programmes. His work has brought about a significant change in awareness on Thalassaemia in Bangladesh and now there are more than 4,600 free Thalassemia carrier detection screening tests in 35 universities and colleges across the country. 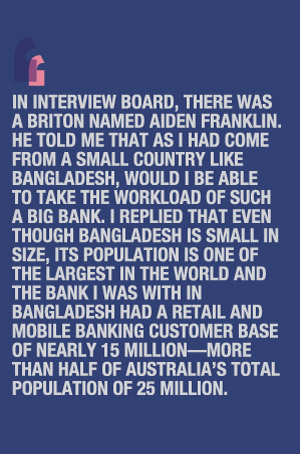 “I have had the pleasure to meet him and he is an impressive young man. He has embodied the community leadership that is so vibrant in the voluntary sector and which makes Bangladesh world leaders in the field of development and grassroots activism.

I have no doubt that he will be an inspiration to other young leaders in changing their communities and help realise the exciting potential of all the peoples of Bangladesh.”

Barbara Wickham, Director of British Council said, “On behalf of the British Council, I would like to congratulate Arefin on receiving this award. As an ‘Active Citizen’ volunteer, he has shown remarkable commitment towards raising awareness on Thalassaemia – a genetic blood disorder, connecting particularly with young people across Bangladesh to ensure that current and future generations are aware of the risks.

Arefin’s initiative ‘Youth Club of Bangladesh’ is both a powerful and inspiring example of youth working at the heart of their community to address social issues.

“We believe that Arefin’s work is testament to the benefits of embedding social action in the journey of young people, and that through the continued work of ‘British Council’s Active Citizens’ programme, we will have the opportunity to work with more young people like Arefin, who strive to make long-lasting, positive contributions to society.” ■