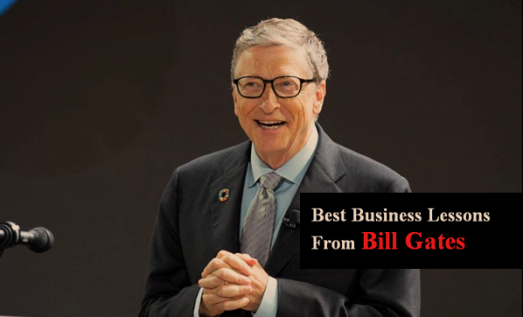 World’s second richest billionaire in 2020 according to Forbes, Bill Gates is the iconic figure in tech industry across the globe. Dropping out from Harvard in 1974 he started a computer software company that would eventually make Gates wealthiest person. Gates in his life learnt many lessons doing business and that could guide any businessmen today especially in tech sectors. He earned the money by masterfully guiding the world into the era of networked personal computers.

Here are the top five business lessons Gates learnt in his early life.

Gates when was an eighth grader, attending a private middle school in Seattle called Lakeside in 1968. The school during this year invested $3,000 in a state-of-the-art computer. Bill aged 13 joined computer club and was instantly hooked. He and a handful of other enthusiastic students racked up hours and hours on the machine, learning how to program through trial and error. It was the beginning of a journey that would propel Gates to astronomical success. Here’s where the dumb luck comes in: in the 1960s, very few colleges had computer labs and a middle school with a computer was unheard of. The chances of a 13-year-old having access to a computer were pretty much one-in-a-million.

It is said, unless Lakeside purchased a computer, Bill might never discover his love for computer programming and Microsoft could be impossible to run its journey

Golden break of Microsoft came upon when Gates called up a computer company called MITS and told them that they had developed a BASIC interpreter for their microcomputer, the Altair 8800. Gates along with his childhood programming friend, Paul Allen, were looking for a way to turn their shared computer hobby into a career in 1975. MITS felt interested in their venture and told to show a demo regarding the project but unfortunately Bill couldn’t show a presentation of the software. Luckily, MITS allowed Bill to make the presentation sooner and founded Microsoft in April 1975.

A famous quote of Roy Ash, co-founder of Litton Industries spread, “An entrepreneur tends to bite off a little more than he can chew hoping he’ll quickly learn how to chew it.”

‘Quality Control’ as a Fundamental Fact

The more the Microsoft grew, the more programmers needed to be hired. Gates had taken on the role of CEO and his job didn’t call for any programming. But that didn’t stop him from reviewing and often rewriting – every single line of code that the company released. Bill started to focus on quality of the software and make a perfect team to run their work. And Gates never deviated from his team coordination. So coordination and team control are the basic facts to control the quality of the best products.

In 1987, Microsoft released Windows 2.0 but didn’t fare much better. It found moderate success thanks to software – in particular, Excel, Word, and Aldus Pagemaker. It wasn’t until 1990, when Microsoft launched Windows 3.0, that they found significant success with a graphical operating system. It was a big moneymaker for the company and it sold over 10 million units in just two years. And then Microsoft with the hands of Bill found the model that would transform them into a computer software giant.

Allow Negative Reviews from Unhappy Customers for Getting New Ideas

Gates in his whole life has learnt a thing that unhappy customers could be the best part of learning many things. After even marathon negative reviews, most people continue to use Windows. Windows has been the world’s primary operating system since 1990 and it boasts a stout 82.5% market share as of August 2011. The reason is simple: Microsoft continues to respond to customer feedback and improve their products and so Gates stated, “Your most unhappy customers are your greatest source of learning”.

Bill Gates career has been marked by his incredible vision. Microsoft beat out the competition largely because they were always looking one step ahead, to the next revolutionary idea. So getting ahead of business, you need to think ahead.