Blockchain” is not a widely known or used term. Those who know might have heard the word in conjunction with ‘Bitcoin’-the virtual currency bitcoin, and might think of these two words as synonymous. Actually, technology behind the record keeping of the virtual currency is known as blockchain. Satoshi Nakamoto, pseudonym, a group of computer engineers invented blockchain technology back in 2008. This technology is also known as Distributed Database or Distributed Ledger Technology (DLT).

In the traditional computerized record keeping space, records are being kept in centralized ledgers managed by a trusted third party (in case of money it is the bank). On the other hand, in the blockchain technology, information remains in a distributed mode and are maintained by several (hundreds of ) computer systems. Each of this computer is called ‘a Node’ and the active Nodes those maintain all blockchain records are known as ‘Miner’.These (complete and active) nodes remain distributed throughout the internet and work in co-operation with other active nodes to keep the records.

Each node contains the blockchain software, which, among other, carry out the verification of the identity of the transaction originator, using cryptographic signature.

Every block contains important information, which among other includes transaction amount, identity of the transacting parties, time stamping and cryptographic signature.

In blockchain, there is no possibility to record illegitimate transaction and if anyone attempts to manipulate a single transaction block, s/he would be required to manipulate previous blocks, which are the basis of the current one and the manipulation needs to be done to all or maximum number of the active nodes simultaneously. Therefore, record manipulation in a distributed ledger environment is almost impossible.

Financial Institutions are the early adopters of blockchain technology. In banking industry account information is kept in a Core Banking Solution (CBS) system and customers usually get access to the account through the internet. These centralized modes of keeping records are expensive. Moreover, due to private control on the records, customers remain at risk of suffering single point of failure. However, significant share of bank’s expenditure is allocated for installing and maintaining these IT infrastructures. 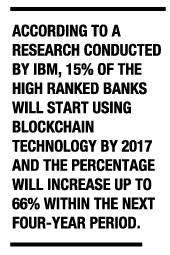 After the Global Economic Recession banks are now concentrating in cutting their costs. Blockchain has paved the path for doing so.Therefore, the major banks in the US and in Europe are reviewing the proposition of distributed ledger technology as alternative to their existing IT infrastructure. According to a research conducted by IBM, 15% of the high ranked banks will start using blockchain technology by 2017 and the percentage will increase up to 66% within the next four-year period.

Proper implementation of blockchain technology will not only reduce cost, but will also disrupt the way banking operates today. For example, currently peer to peer (P2P) transaction is not possible without the assistance of a ‘trusted third party’ (i.e. bank or money transfer agents). And the system takes quite some time, involve several FIs and incur significant service charge for processing payments, specifically for cross-border one. Blockchain technology could revolutionize the process by cutting all the middlemen and could make it as simple as sending an e-mail today.

Approximately 11 companies of different countries have opened international money transfer services using blockchain technology. A Singapore based company called ‘CoinPip’ has opened their cross-border money transfer service using blockchain technology and are charging only 2% for their services, that are available in China, Philippine, Indonesia and India.

Blockchain technology’s ability to digitally verify and keep records of transactions made it ideal for financial record keeping. However, this technology has the potential to be used in other areas such as, healthcare, Insurance, supply-chain management and much more. Blockchain technologycan also help governments to collect taxes, deliver benefits, issue passports, record land registries and can generally ensure the integrity of government records and services. Most significantly, this technology is likely to disrupt the traditional way of keeping records. Analysts believe that it could impact every business and individual in years to come and its advent may be comparable to the invention of the Internet.