When Danny Aguirro completed his bachelors in Marketing from University of Philippines of Dilliman, eight years ago; he had a job offer in a renowned bank in Metro Manila. Instead of taking that day job, he chose to enter into the country’s growing Business Process Outsourcing (BPO) industry.

“When I joined, the industry was growing. Now more and more Filipinos are leaving their day jobs for higher wages in BPO jobs. Not only do BPO jobs give more money, but also give more flexibility,” Danny told this correspondent who recently made a visit in Metro Manila.

At midnight local time, the call center in Bonafacio business district of Manila where Danny works as a night-shift manager come to life as dozens of workers, sitting cubicle by cubicle, began making calls to generate customer leads for a group of California’s for-profit schools.

Other workers dialed American hospitals to verify claims for insurers. “No matter how difficult the caller, Danny said, “our agents can’t hang up. They have to figure out a way of ‘calmly ending a call.”

The island nation of Philippines has become the prime destination for outsourced jobs in the world over the last couple of years. Earlier this year, Tholons Inc. a leading US-based services globalization and investment advisory firm published a report that placed Manila ahead of Mumbai as the second largest outsourcing destination in the world.

Cebu, another big city of Philippines also figured among the top ten preferred destinations. More than one million Filipinos now work at call centers and in related outsourcing businesses, mostly 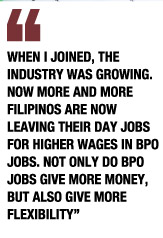 Not only American companies but also some large European companies are increasingly outsourcing more sophisticated work that was once largely done by legal secretaries, junior accountants and medical staff. This includes preparing research reports, formatting documents and providing clinical support.

With the BPO boom, Philippines have increased its annual growth rate by 10 percent for the past decades. This has been the largest source of private employment and second-largest contributor of foreign exchange earnings. For most of the last four decades, while East Asian tiger economies were roaring ahead, the Philippines wallowed amid rampant corruption, lousy roads and sluggish investments.

Much like Bangladesh, for years foreign remittances by Filipinos working abroad were a pillar of the country’s economy, along with agriculture and mining. However, now the resurging economy is drawing some of those workers back home as industries like BPO has created the economy a new dimension.

Danny told Fintech that The BPO industry has not always been a fast growing market. The first call center was set up by Accenture in 1992. However, it was only after restrictions were eased in 1995 with the Special Economic Zone Act that the industry started growing.

“The past ten years in particular saw rapid growth with industry revenue growing many-fold from US $3.26 billion in 2004 to $27.4 billion in 2013. Employees working in this industry rose by a similar percentage rising from 101,000 to 1,200,000 over the same time period, said Danny. In the last one decade, the BPO sector in Asia was more or less a battle between India and the Philippines when it comes to such farmed-out tasks. These two countries are most often the top picks of outsourcing firms so they are often compared in terms of their standing in the BPO sector. 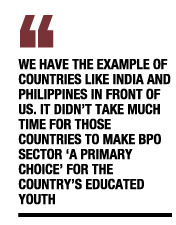 But in the last few years, most companies especially the US ones are opting for the Philippines over India. Danny said that the Filipino companies are getting the edges over the Indian companies because of their communication skill.

Filipinos have carried with them an affinity to American culture which leads them to having better sounding spoken English, and therefore a stronger connection to foreign customers they talk to over the phone, said Danny.

It is to be noted that Philippines is the only nation in the world which was once colonized by USA. People in Philippines are strongly influenced by the US cultures.

Besides, Danny said, in India there are people who do not want to take the jobs in the BPO sector because they prefer a more secure day job, while BPO feels too temporary. “Or a lack of qualified people leads to outsourcing companies in India losing clients. In Philippines, there is no problem of finding qualified people for the sector,” he said.

According to the annual report of the IT and Business Process Association of the Philippines (IBPAP), the relatively cheaper cost of office rental and the government supports in that regard played an important part for the BPO boom.

Metro Manila’s office districts still offer some of the most affordable leases in the region of South East Asia in comparison with cities like Bangkok, Singapore, Jakarta, Taiwan and Hong-Kong.

According to the real estate firm Colliers, the central business district of Makati City has the highest lease rates in greater Manila, with an average charge per sq foot per annum of $29 as of the second quarter of 2014. Fort Bonifacio, the country’s second-most-desired location, charges $17.89, while Ortigas, the third main business district offers rates at $12.87. In India, the country’s biggest BPO competitor, charges range from $31 to $118 depending on the city.

Also, a unique trait associated with the Philippines’ BPO sector is that many BPO tenants are co-located in office towers in central business districts rather than in large office parks outside of the main city centers.

The BPO dream for Bangladesh

Time and again, Prime Minister’s Information and Communication Technology Affairs Adviser, Sajeeb Wazed Joy expressed his confidence by saying that the country would be able to create two lakh jobs every year from 2021 in the Business Process Outsourcing (BPO) sector.

In the last one decade, like Philippines, Bangladesh too made a rapid economic progress. Bangladesh is also located in a geographically advantageous location for BPO in terms of time zone. To tap the success in BPO sector and to draw the country’s huge pool of educated youth, the BPO summit has been arranged in the last two years.

Ahmadul Haque, president of Bangladesh Association of Call Center and Outsourcing (BACCO), said that the BPO sector will provide job opportunities for 200,000 youth by 2021. “We have the example of countries like India and Philippines in front of us. It didn’t take much time for those countries to make BPO sector a primary choice for the country’s educated youth,” he said.

About fruitful initiatives in Bangladesh to popularize the BPO sector, Ahmadul said that the BPO summits worked as their main initiative. He said that first summit was an iceberg cutter. Now people are more aware than the previous year. “We would like to take it to a higher level,” he added.