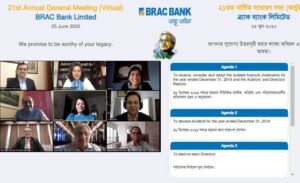 The dividend that the bank’s Board recommended earlier in April, hence remains unchanged.

BRAC Bank Limited held its 21st Annual General meeting (AGM) on a virtual platform due to COVID-19 pandemic situation. This is for the first the bank had to go for a virtual meeting with its shareholders.

The AGM began at 1100am on the digital platform where all the participants, including the bank’s shareholders and Board of Directors, joined with their unique credentials. The bank had communicated every details of the virtual AGM with its shareholders as a precaution due to this exceptional arrangement.

Members whose names appeared in the Members’/Depository Register on Record Date, June 3, 2020, was eligible to participate and vote in the AGM.

The AGM was chaired by Dr. Ahsan H. Mansur, Chairman of the Board of BRAC Bank. Other members of the board – Asif Saleh, Fahima Choudhury, Farzana Ahmed, Kaiser Kabir, Kazi Mahmood Sattar and Nihad Kabir were also present at the AGM.

BRAC Bank’s Managing Director and CEO Selim R. F. Hussain, who also participated in the meeting, responded to the queries of the shareholders and thanked them for their unwavering trust on the bank.

Reappointment of Asif Saleh, nominated director by BRAC, was also approved by the shareholders in the AGM.

Dr. Mansur expressed his gratitude to all the shareholders, customers and other stakeholders for their continuous support to the bank and reiterated the board’s commitment to continue responsible and sensible business practices and returns to the shareholders.

The AGM was dedicated to the memory of Sir Fazle Hasan Abed KCMG, founder of the bank who passed away last year. The audience observed a minute of silence for Sir Fazle at the beginning of their first virtual AGM.