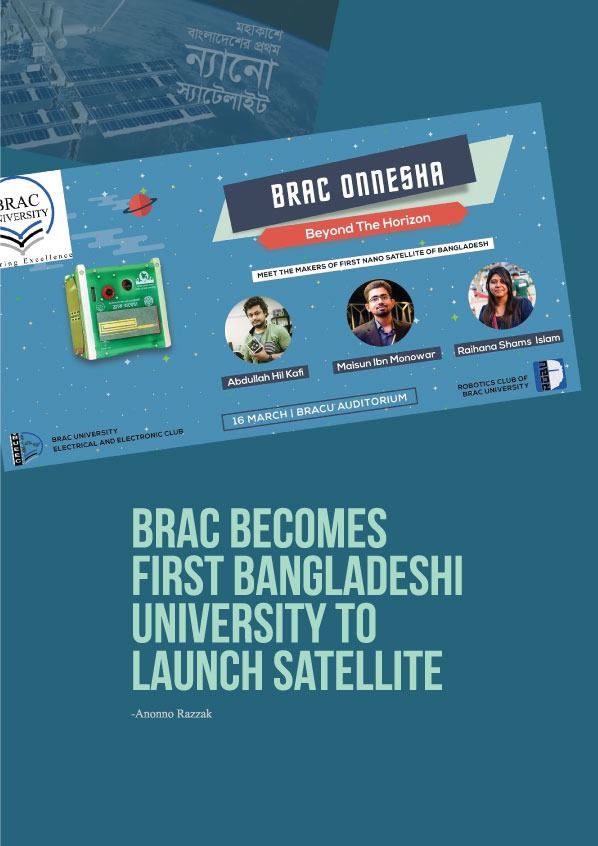 In collaboration with BRAC University Electrical & Electronic Club (BUEEC) and Robotics Club of BRAC University (ROBU), a program titled “BRAC ONNESHA: Beyond the Horizon” was organized at UBT Auditorium on March16, 2017 to honour three BRAC students who developed the nano-satellite “Onnesha”. Onnesha is the first ever satellite developed by any Bangladeshi university. The nano-satellite Onnesha – a 10 centimeter-edged cube-shaped satellite – designed, developed and assembled by three Brac students in Japan’s Kyutech, is expected to be launched into low earth orbit by next month.

Syed Saad Andaleeb said, “It is a beginning of a major journey although it may be the first little step. It is now proved that Bangladesh too can invent.” Professor Syed Saad Andaleeb also said that it is a striking day about which Bangladesh should feel proud and especially thanked BTRC and Bangladesh Space Research and Remote Sensing Organization (SPARRSO). Professor Andaleeb said that the space was the final frontier with many promises and that this was a powerful transition and that though the nano-satellite was small, the journey of its foundation was big.The Vice Chancellor urged the students to not run after gaining certificates and study only for getting jobs.

designed, developed and assembled BRAC ONNESHA at the Kyushu Institute of Technology (Kyutech) shared their feelings to the audience during the program.

Maisun said, “I have many memories around this campus that will always be with me. Being here today, I feel happy. Our achievement is not personal, it is for our country, Bangladesh. We believe, Bangladesh will ascend into in the list of developed countries very soon”.

Antara said, “At the very beginning, we had no idea what we were actually going to do. We didn’t even think that we could get such opportunity. But ultimately we got this and with long tiring hours we were able to make “Onnesha”. We are really happy indeed”.

Abdullah Hil Kafi shared with the audience how the students worked for this and how they finally created Onnesha.The satellite will allow high quality photographs of land that can be used to analyze vegetation, urbanization, flood, water resources, forestry and other natural resources from overhead, Kafi said.

It is capable of completing one orbit 400 kilometres above the ground in 90 minutes and will be passing over Bangladesh four to six times every day.

BRACU has also started building a corresponding ground station in its Mohakhali campus in Dhaka, Bangladesh.