Video conferencing in the age of Covid-19 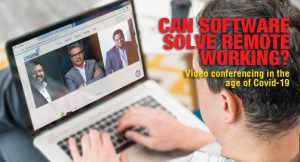 If striking while the iron is hot is a good strategy for businesses, then there are few products that are more in need right now than software solutions for remote working.

While that takes no genius to figure that out, it certainly requires quite a bit of resourcefulness to actually produce a teleconference software. Venture Solutions seems to have what it takes to make one, as the Bangladeshi tech company promises all the sought after features in its freshly coded EzyMeeting – “a 360 degree solution to simplify and digitalize” remote meetings of all variety.

Venture’s expedition into the video conferencing market comes at the time of a world wide revitalization of video conferencing products and technology, as many companies scramble to secure their piece in the increasingly growing pie.

The Covid-19 lockdown has forced institutions and offices to continue work without coming to the work. Unsurprisingly, companies providing digital meeting solutions struck gold as a result, and no one gained more prominence than the hitherto little known US company Zoom. Thanks to a sudden spate of downloads of the online conference software, the word ‘Zoom’ has now entered popular lexicon, becoming a verb. “We need to Zoom!”

Zoom’s business spiked so much that the company saw a 535% rise in daily traffic to its download page in March alone. As people began to use products like Skype, Microsoft Teams, and other virtual meetings platforms, Zoom somehow outran its competitors, growing from 10 million daily meeting participants in December to more than 200 million in March.

Owing to its relatively intuitive interface, coupled with the facts that the free service allows up to 100 attendees who don’t need a login to access a meeting, Zoom’s reputation spread like wildfire and seemed to have reached every corner of the globe.

“No tech company on Earth is doing more to keep civilization working at a time when it could so easily fall apart. Zoom does that by providing an exceptionally solid, reliable, friendly, flexible, useful (and even fun!) way for people to be present with each other, regardless of distance. No wonder Zoom is now to conferencing what Google is to search. Meaning: it’s a verb,” prominent tech journalist David Searls wrote on his blog.

People have continued relying on phone calls and emails, but they are often inadequate when more than two participants need to join a conversation, especially when working remotely. And that is why teleconferencing is projected to be a huge market that will grow immensely within the next few years. So, it came as no surprise when Google launched its free video conferencing service Google Meet earlier this month.

In 1927 America’s Bell Labs connected Secretary of Commerce Herbert Hoover and other officials in Washington, DC, with AT&T president Walter Gifford in New York City through a two-way audio connection, accompanied by a one-way video connection from Washington DC to New York.

By 1964, AT&T was ready to introduce what it called the Picturephone, a revolutionary technology that later was met with complete commercial failure after the company had spent $500 million on its development.

In those days and for a long following period video conferencing was seen as little more than a high-tech toy. And it’s easy to see why. For holding video conferences you would need a specially equipped room costing from $250,000 to $1,000,000 or more.

This began to change with the arrival of low-cost solid-state memory in the late 1980s that brought down the cost to a more manageable $10,000 or so.

Video conferencing over the Internet using desktop computers began in 1994, when Intel introduced ProShare for Windows PCs, which required only a webcam and microphone, a sound card, a reasonably high-speed Internet connection, and video conferencing software such as Microsoft NetMeeting or iSpQ.

“Experiments with video conferencing over the Internet were conducted as early as the 1970s, but most were abandoned during that period due to limitations in bandwidth. Images and video characterized by poor resolution and poor sound quality were the mainstay until the early 21st century, when technological advancements allowed for additional bandwidth,” writes Theresa M Senft on Encyclopaedia Britannica.

Since the early 2000s, things started to change very rapidly. Immediately visible leaps in technology could be observed within the span of a year or few months. Low-resolution videos were replaced by increasingly better quality video.

Mobile devices became unimaginably more powerful resulting in several “video chat” applications being developed. Some of the more well-known ones like Skype (launched in 2003) and FaceTime (released by Apple Inc in 2010) paved the way for mass-scale video conferencing at the consumer level.

Local solutions: Can they go the distance?

But multinational corporations aren’t the only ones entering the market. There seems to be a need for local software provided by local companies, as evident from efforts by software developers like Venture.

Venture’s EzyMeeting seems to target the needs of the senior executives and administration by giving tools for “enhancing transparency and accountability in the organization.” In that sense it acts as more than a mere video conference software.

“The simplicity of the design and easy-to-use functionalities of the system make it stand out from our competitors,” Venture claims.

“The system,” as Venture calls it, is supposed to provide users with mobility, freedom, and a boost in productivity.

Only the future can tell what will be the role of local companies. Perhaps a more tailor-made solution will be preferred by local clients. But with incredibly powerful AI and machine learning operating behind all big software products, larger companies can now be more local than ever. One thing is for certain, however: video conferencing and remote work is going to change for the better.