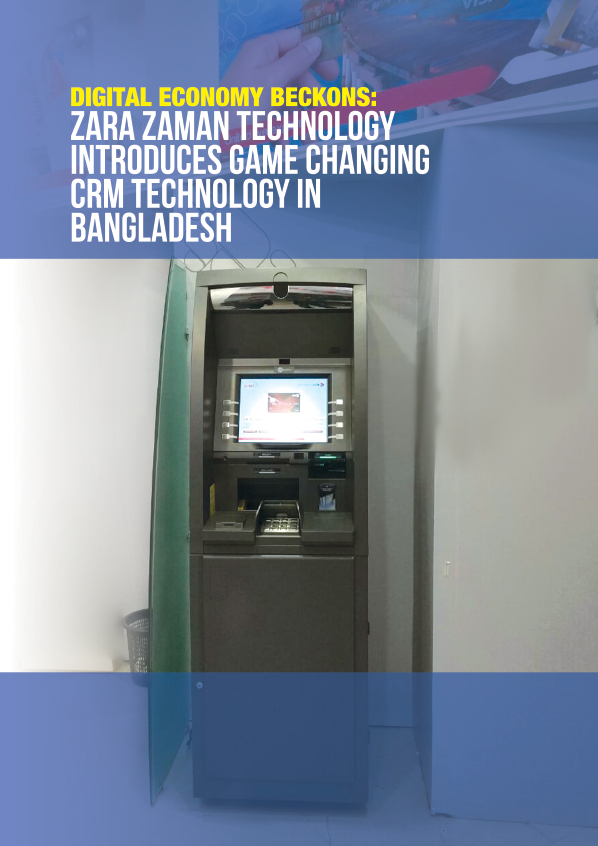 Zara Zaman Technology Ltd (ZZTL), which is one of the fastest growing suppliersand service provider for alternative delivery channel of the bank,has partnered with GRG Banking Equipment Co Ltd (GRGBanking), a leading ATM, CRM, VTM manufacturer, to provide its products and solutions such as ATM, CRM and VTM in Bangladesh. The company has been carrying out scrupulous R&D for major part of last two and half years to introduce CRM in Bangladesh and has just successfully launched CRM recently in 2017.

Cash Recycler Machine (CRM) is much more than an online Cash Deposit Machine or CDM. It’s based on highly advanced and latest technology used in the self-service industry. CRM is essentially a high tech combination of traditional ATM and online CDM, consolidating both into one module, with inbuilt features of real time cash deposit, cash withdrawal and cash recycling. Cash Recycling refers to automatically using the deposited cash for successive cash withdrawals from the same device without any manual intervention. Machines having two different devices – one for deposit and one for withdrawal – are not considered CRM, as per international standards.

ZZTL envisioned that Bangladesh market requires high value CRM sooner rather than later by which banks can serve their customer better. New dynamics of transaction in CRM will change the banking industry for good. Being one of the leading vendors in the country for the past two years in alternative delivery domain of the bank, ZZTL took the big initiative to launch pilot testing for CRMs in Bangladesh.

Partnering with GRGBanking, which has been the number one manufacturer of both ATM and CRM in China for the last nine years and fourth largest in the world based on annual shipments, has given ZZTL the opportunity to work towards developing a customized CRM technology for Bangladesh. 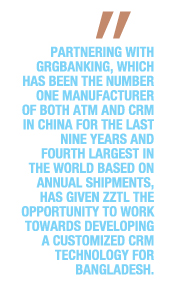 “GRGBanking is currently in partnership with ZZTL, with a mission target of providing self-service equipment’s and solutions with highly advanced technologies to the banks and to be able to participate in the development and digitalization process of Bangladesh financial industry,” said Rumana Zaman,the Managing Director of ZZTL.

As per GRG’s focus on South Asia and especially to the Bangladesh market, it initiated the project for CRM development for Bangladesh, back in July of 2014. GRG has been supplying ATM for the Bangladesh market since 2004 and became very cognizant of the challenges and difficulties in the country’s market. “That’s why GRGBanking is not just a leading manufacturer of these machines, but it is especially equipped for facing all the challenges specific to Bangladesh. And it has planned and acted accordingly,” Rumana Zaman told Fintech.

“To develop CRM for Bangladesh, the first step was to recognize the Bangladeshi currency and develop the Bangladesh Currency Template or ‘BDT template’ for CRM. So, GRG started to collect data to complete the feasibility study with the help of ZZTL,” said Rumana Zaman.

In the feasibility study it was found that the Bangladeshi currency in circulation has some distinct differences from the currencies in the developed countries. As the CRM is a new technology for Bangladesh initially there is naturally a lack of regulatory policy guideline by the Central Bank, pertaining to the issues relating to CRM.

Generally, in countries that have CRM, it is required to certify the CRM from Central Bank first. During the certification process the central bank supplies adequate cash to the supplier, to develop the note template and after development, test and certify the machine for the local deployment. But in case of Bangladesh, there is no such test center as of now.

As a result, the development of a BDT template depends on the willingness of local banks to work with GRGBanking to develop and test the BDT template. And then get the Central Bank Certification through that bank.

Other challenges include regulating old and ‘soil’ notes. Unlike developed countries like the US and EU countries, Bangladesh does not have an expiration policy for old soil notes. It is commonplace in Bangladesh to use notes issued 20 or 25 years back. Although not vastly available, old notes like that are still in circulation and considered valid. Notes issued after the year 2000 are widely used as well.

There are also the challenges of having too many versions per denomination, each with different security standard. To tackle this, GRGBanking categorized each version as separate types. For example, Tk1000 has two versions with completely different colours, images and security checkpoints. Tk500 has seven types, Tk100 has more than seven types and so on.

In order to make CRM usable in Bangladesh, the machines will need a number of adaptability mechanisms in place. The CRM has to be able to accept highly soiled notes, without which 70 to 80 percent of notes will be rejected. The CRM must be able to accept holed notes, otherwise nearly 80 percent notes in circulation will not be useable with the system. It will also have to accept ‘graffiti’ notes, as a vast number of Bangladeshi notes have seals or writing on them. It is estimated that over 90 percent of notes will be rejected by the machines if the system cannot find a way to recognize and authenticate ‘graffiti’ notes. All of the above criteria has to be fulfilled, without affecting the authentication of genuine Notes and detection of Counterfeit notes.

“Without these, CRM will be unfeasible in the Bangladesh environment, at least at this stage, because general people will never use a machine that rejects all their notes during deposit. They will rather prefer to go to the branch teller. So the features of CRM will never be fully realized if these note qualities are not accepted,” Rumana Zaman said.

For CRM to support a new denomination for currencies like USD, Euro etc, reference data of 20 notes from each denominations or versions are generally enough. GRGBanking could have easily developed the BDT template based on 20 notes. But that would not be enough to cover the unique needs of the BDT currency. Consequently, due to this unique situation of BDT notes, GRGBanking and ZZTL had to work through a rigorous testing of each note type, with over Eighty thousand pcs of notes, to ensure the genuine note recognition and counterfeit detection is working properly for all note types as well as supporting all the above criteria for Bangladesh currency. As a result, the accuracy rate of accepting genuine notes stands in the region of 98.7% which is very much compatible to that standard of EU & US currency acceptance rate.

After preparing for two and half years, in late 2016, finally GRGBanking and ZZTL presented the technology to the central bank with the help of The City Bank Ltd. It was able to pass the central bank certification tests with their full satisfaction. After understanding the value of the modern machine like CRM BB has extended all helps possible from them & encouraged banks to adopt this new technology. Currently two banks are on board in successfully launching CRM in Bangladesh. United Commercial Bank Ltd (UCBL) launched the product in January 2017, followed by The City Bank, which launched in July 2017. Several other leading banks of Bangladesh is the in advanced stage of launching the CRM after the completion of internal certification set to happen soon. At present the machines will supportnotes of Tk1000, Tk500 and Tk100.