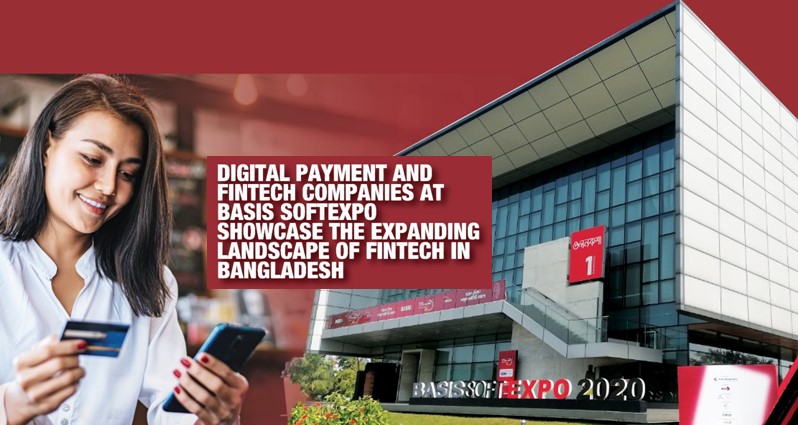 Once only a dream, in 2020 you can trade stocks, manage insurance and have your food delivered using fintech, among a number of other things and often from a handheld device. Bangladesh has a huge market for fintech, as leading market studies repeatedly found. This led to the emergence of bKash in Bangladesh, one of the largest mobile financial services companies in the world.

Last month BASIS Softexpo’s dedicated zone for ‘Digital Payment And Fintech’ hosted four fintech companies, allowing for the audience in the country’s largest software fare to learn about and understand better what these companies are doing.

The common focus area for these companies are payment gateway and related services, given the existing inflexibilities in Bangladesh in digital transaction internationally, which has long been a major gripe of entrepreneurs, specially startups and freelancers.

Focusing on this issue Bank Asia, one of the four companies hosted at the Softexpo’s Digital Payment And Fintech Zone, had introduced online payment gateway services for service exporters in Bangladesh in 2012 when its online payment gateway service business with Payza was launched. Bank Asia later partnered with the New York based financial services company Payoneer.

“At Softexpo, we highlighted OPGSP products, with aim to encourage individual freelancer and

firms to channel the remittance inside the country though Payoneer,” said Rubayet. Currently, the bank is planning to provide loans to ICT experts to help them grow more as entrepreneurs.

Bank Asia also showcased ‘Shadhin Card’ at Softexpo, which is an alternative to ERQ (export retention quota) account. The dual currency card allows freelancers to transact in both Bangladeshi taka and US dollar. Owners of the card can retain 70 percent of the foreign remittance they earned and use the credit for e-commerce transactions in the country and internationally.

Through this card freelancers are also able to convert all earnings completely to the local currency, as well as use the card at ATMs and POSs at home and abroad to withdraw money or make payments. The microchip equipped card provides free SMS alerts for all transactions.

Beyond borders with fintech

Bank Asia’s partner for the online payment gateway services Payoneer was another exhibitor at the Softexpo Digital Payment And Fintech Zone.

Leveraging its strong grounding in technology and banking infrastructure, Payoneer delivers a suite of services that includes cross-border payments, working capital, tax solutions and risk management. Its services extend to customers ranging from aspiring entrepreneurs in emerging markets to the world’s leading digital brands like Airbnb, Amazon, Google and Upwork. Founded in 2005, Payoneer is profitable and has a team based all around the world.

Without PayPal’s presence in Bangladesh, Payoneer has emerged as one of the leading avenues for service exporters to receive payments. Worldwide, over 4 million businesses and professionals use Payoneer to simplify payments and manage their global business in one account.

Payoneer’s global banking network allows customers to receive funds via local bank transfers instead of international wire transfers, saving as much as 70% on their payment fees. Customers can transfer funds from their Payoneer account to a local bank account, in the currency of their choice and can also choose how and when to use their funds. They have the flexibility of transferring the funds to their bank account, spending online or withdrawing at ATMs using the Payoneer prepaid MasterCard.

“We have been participating in the BASIS SoftExpo since 2017 with our banking partners Bank Asia, where we have dedicated space to display a booth for information on how Payoneer can help businesses grow beyond borders,” said Nahid Hasan, Payoneer’s Head of Business Development in Bangladesh.

Payoneer in collaboration with Bank Asia hosted a conference on outsourcing at the BASIS SoftExpo 2020, which was attended by over 300 online professionals and outsourcing businesses.

“Payoneer is dedicated to leading the digital wave with our loyal partners in Bangladesh as we empower businesses to go beyond – beyond borders, limits and expectations,” Hasan said.

According to Findex, 78% of the world’s unbanked adults receive wages in cash and have access to mobile phones. It is this context that made MFS companies so prominent in Bangladesh and elsewhere.

The biggest MFS provider bKash was one of the four companies featured at the Digital Payment And Fintech Zone at Softexpo, alongside payment service company IT Consultants Limited (ITCL). Although different in size and scope, the two companies are connected and partners for delivering their products.

ITCL owns the payment processing consortium popularly known as Q-Cash, through which bKash delivers cash withdrawals on ATMs for its customers. The company provides to major banks, financial institutions, government organizations and retailers with an advanced infrastructure for transaction processing services. It is able to support its clients through one of the largest bank driven independent ATM networks in Bangladesh.

Established in 2000, the company now provides credit and debit card processing services, Q-Cash ATM and POS sharing with 36 partner banks. Providing access to more than 9,500 ATMs access for Q-Cash member banks and over 35,000 POS across Bangladesh, the company won the Best ICT Solution Provider-2015 (local market focus) Award by The Daily Star in 2016 and the Apicta Awards (Global ICT Award) Runner up in December, 2017.

The Q-Cash network now connects banks and cards to POS, telco operators and Bangladesh Post Office, reaching out to millions of unbanked people and enabling them to carry out transactions.

bKash, the leading MFS in the country, and one of the largest in the world, continues to extend its services, and now include a plethora of fintech products. From bill payments to remittance services, and transferring funds to payment options now serve millions across the country, providing the unbanked population a platform through which financial inclusion is being accelerated.