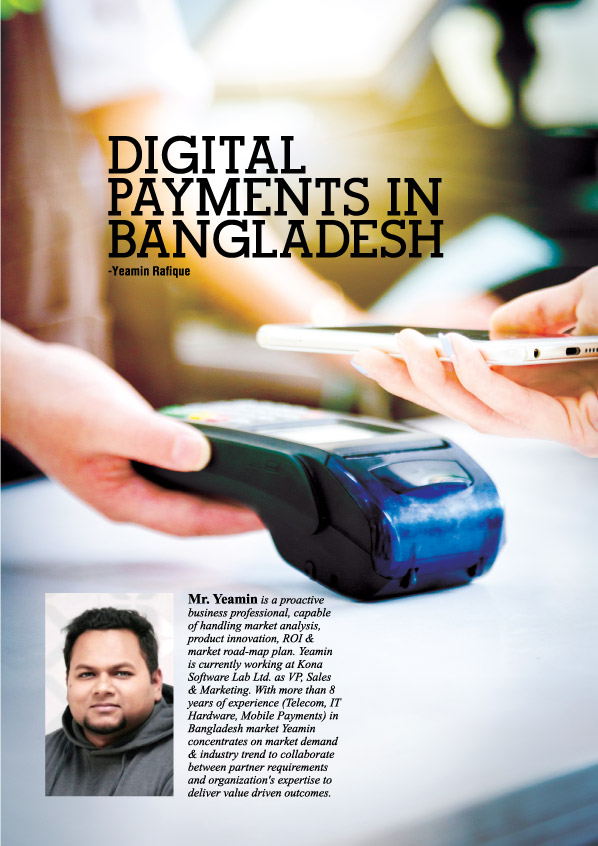 Digitization at service level requires an infrastructural upgrade first. The doorway opened for digital payments in Bangladesh, during 2011-2012 when NPSB (National Payment Switch Bangladesh) and BEFTN (Bangladesh Electronic Fund Transfer Network) were introduced. Even though some might refer to the emergence of ATM and banking card during 90s as the beginning of digitization but if we consider the interoperability among the industry players then NPSB & BEFTN should be considered as the remarkable technological upgrades that encouraged both traditional & non-traditional financial service providers to evaluate Bangladesh as a potential ground for the disruption of digital payment services.

Banks have always been the key stakeholders of the financial service domain in Bangladesh for the mass. More than 55% of the total population has traditional banking access where approximately 50% are actively using the service nationwide. Being a financial organization Bank has diversified concentration on several financial aspects which doesn’t only focus on general payments. This arises some question marks on bank’s pace for rapid introduction of technology sometimes. However, when it comes to accountability & security, Bank certainly plays a pivotal role without any second thought.

The digital payment disruption at mass level started in Bangladesh when a mobile banking application was launched in the middle of 2011. With more than 33 million subscribers, it is still kicking in with an immense success rate nationwide. As an emerging nation from SEA region, Bangladesh market demography is dominated by young and adult (covers 2/3rd of the total population) segments which is undoubtedly the most attractive batch of customers you can have while promoting a technology product. The penetration of telecom service and increased usage of mobile phones also facilitated this industry to grow.

The success story of mobile banking in Bangladesh is purely depends on their market identification, mobility and wider distribution reach. One remarkable thing they did is to encourage the mass unbanked & banked population from all over the country to avail a financial service willingly. Even though mobile banking solutions were initially aiming at rural demographic with P2P, but in recent years they are targeting the urban market with same P2P with different packaging. Mobile banking created the reliance and trust factor among the mass consumers towards MFS that many financial service providers leveraged later on. Also the emerging risk of potential fraud cases, pushed the service providers to emphasize more on security and accountability.

The success story of the first non-bank MFS and the changing market dynamics encouraged the regulators to come up with a framework for mobile financial services for Bangladesh. The commercial banks also started to re-evaluate the importance of mobility in terms of financial service across the country. Gradually number of commercial banks were awarded MFS licensed currently 18 (25 licensed) are in operation. However, the market is heavily dominated by bKash followed by Rocket (Dutch-Bangla Bank Ltd.) while others are still finding ways to incase market base. With a total customer base of 5.8 Cr. with only 2.1 Cr. active accounts, the market still offers a huge opportunity to penetrate. 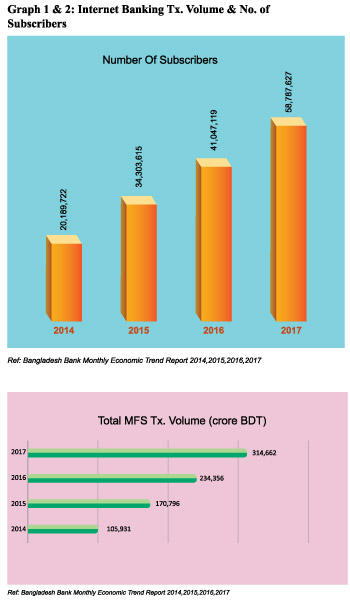 Even though in many parts of the world the MFS or similar services are controlled by the local Telecom operators, the scenario is quite opposite in Bangladesh. While telecom operators have played a significant roles on delivering a smooth USSD experience for the MFS customers, but they were not allowed to play a direct role on providing wide scale financial service for the mass. The service boundary has been restricted till now to utility services (bills, ticket etc.) payment. Even with a passive role and limited active participation the local telecom operators encouraged the consumers significantly towards digital payments.

Over the last two decades, Bangladesh has experienced some major upgrades in consumer income, lifestyle choices, mobile phone & internet usage. All these opened up the horizons for the mass at many levels with an impulse for new technology. This also triggered the demand of banking service mobility at consumer level. One major financial service transition for the customers was the introduction of ATM network and POS terminals at merchants. While these were complimenting the need for cash withdrawal and shopping at retail stores, banks were still evaluating the demand of seamless banking service for its customer.

The major demand for banking mobility started to shift when the broadband internet came to operation. The affordability and stability of the data service ensured that customers can have a seamless banking service even when they are not in the bank. Faster penetration of smartphones, and high speed mobile internet triggered the demand for mobile internet banking or mobile app based banking among the customers.

The open world of information, access to places & service has educated the customer base and increased the possibilities that banks would put more thoughts on developing the solution that will enable customers to have much faster banking access. Significant number of commercial banks are now operating in Bangladesh with established internet banking and mobile banking solution with different services like interbank P2P transfer of funds, Utilities payment etc. The usage significance can easily be spotted from the below stats

Next Generation of Payments

The “Next generation of payments” is actually a variable term considering the place we are in, the market we are dealing with and finally the customers we serve. Technology is dynamic and it’s shifting to different dimension every day. When we talk about digital payments in Bangladesh, the most uniform and established mode of digital payments is banking card, introduced way back during late 90’s. It’s been 20 years almost people are using card as an alternative to cash. The card market was never able to reach to its peak even till today. The overall shift from cash to card payments is yet to be exiting for the banks but from last few years the dyn

amics has started to change. The following stats can put up some light on how the card payments are increasing day by day in Bangladesh .

QR or NFC (The Next Big Wave in Bangladesh?)

In Bangladesh, 140 million people have access to mobile phone and approximately 50%, which is about 72 million, are using mobile internet. Market data shows that about 16 million people own a smartphone and it is expected that by 2020 there will be approx. 30 million people in Bangladesh having at least one smartphone in their pocket. This shifting demographic will surely be responsible for bringing lots of behavioral changes in the market overall.

QR these days is a global phenomenon and has been adopted by many FinTech brands & commercial banks for their wallet based service for payments. QR has already been very successful in different parts of the world due to easy scalability and cost effectiveness. Our neighboring nation India has tested out successful use cases with QR for their National Payment Scheme (Adhar). PayTM as a private label FinTech has distributed the QR in both big chain shops to road side tea stalls. In developing nations QR can play an important role, as these market lacks traditional payment infrastructure.

Like every other emerging markets with a feature phone oriented customer base, the digital payment disruption was built upon the USSD technology initially and still running on it with a full pace. Expecting a dramatic shift from there to NFC or QR payment overnight would not be logical step to consider. Such solutions can be developed either by acquiring a new bubble from the existing market or by creating a new one.

In Bangladesh, the FinTech brands has already started the movement with QR. Local commercial banks are putting up lots of efforts to source a unified platform for their core banking service along with payment as a key USP. The scope of the service is yet to be defined properly, whether to go with merchant QR or Customer QR but that we believe should be decided upon the market demand eventually.

Being an emerging nation, Bangladesh is still fall under the low-middle income group category. So when we talk about the smartphone penetration, it doesn’t necessarily mean that the major portion of people have access to a high end smartphone. Smartphones priced within $100 (+/-) has a wider penetration reach in Bangladesh mostly.

That being said, NFC enabled mobile has a very lower percentage of penetration here. But, since Bangladesh market combines a unique set of customer base, like a large number of unbanked population with feature phone only, those cannot be converted to smartphone user overnight but can be addressed with a contactless/NFC card.

Regardless the market dynamics or customer shifting interest, one aspect would remain constant, we feel, which is the FinTech market will eventually remain under the control by the commercial banks and with relevant regulations. Which indicates, when a major rollout would initiate, any solution whether it’s QR or NFC needs to have compatibility with international payment standard and follow proven security measures.

This would allow banks/FinTech provider greater scope for providing higher accountability and security to their users, that will enable them to create a solid payment eco-system overall.

Where we should lay our priority?

The payments landscape in Bangladesh has rapidly grown over the last decade for the inception of mobile and internet banking. Bangladesh Bank has played a vital role in incorporating NPSB and BEFTN for banking entities. Both QR and NFC based payments along with traditional card based payments can fuel into the digital payments landmark in Bangladesh. However, we should put security aspects in the highest priority in this journey.