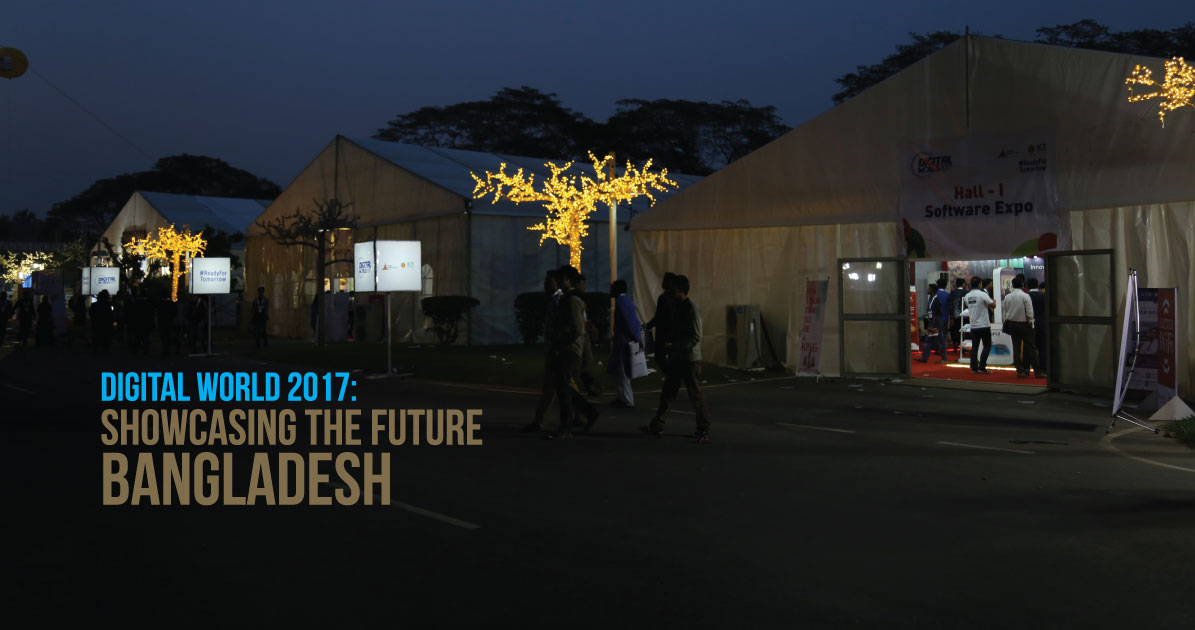 Digital World 2017 was a success. One random quip that was heard by this correspondent inside the venue of Digital World is good enough to realize how successful it was.

“It seems like a larger crowd than Banijjo Mela (trade fair),” said one young person to another on the Third day of the four-day Digital World held at Bangabandhu International Conference Center (BICC) from December 6-9. 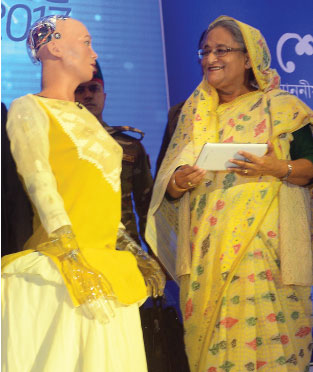 The 2017 edition of the country’s largest ICT exposition truly drew a crowd nearly as large as the crowd of trade fair.

And it’s nothing short of ‘a revolutionary matter’ in Bangladesh because an exposition of ICT now here has been able to attract the attention of the young minds who don’t shy away from gathering in numbers into an expo that display the present and future of Bangladesh under one roof.

Bangladesh is now at a juncture of time in where it has a population—the larger part of which will work as its demographic dividend in near future. The best part is—this youth have embraced the newest technologies and have increasingly become tech-savvy.

Thus events like Digital World have truly been able to garner their attentions and cater their thrust of being accustomed with the latest trends of tech. The four-day long event was obviously a testament to that claim.

THE HOOPLA WITH SOPHIA

The main attraction of this year’s Digital World was obviously humanoid Sophia. 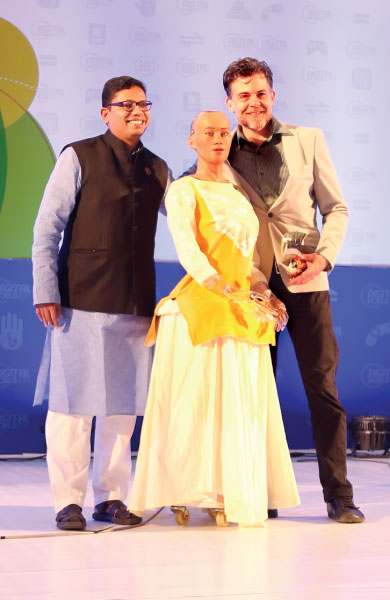 A humanoid robot is a robot with its body shape built to resemble the human body. Hong Kong-based Hanson Robotics Ltd made Sophia having the expressiveness, liveliness, and interactivity features in it.

Invited to the Digital World to open the exposition along with Prime Minister Sheikh Hasina, Sophia expressed her gratitude among the large crowd during the inauguration ceremony.

After the inaugural speech of the Prime Minister, the organizers announced to bring Sophia on stage to meet with Sheikh Hasina.

Then wearing yellow-white top and skirt Sophia came on the stage and the Prime Minister asked her “Hello Sophia, how are you?”

“Hello honorable Prime Minister, I am feeling proud. This is very nice to meet you,” Sophia replied.

“I know you are the daughter of the great leader father of the nation Bangabandhu Sheikh Mujibur Rahman. You are also known as the Mother of Humanity in the world and you are implementing the Digital  Bangladesh,” she said.

Sophia also said that she knows it very well that the name of the Prime Minister’s granddaughter is Sophia too.

“Yes, the name of Joy’s (Prime Minister’s son and the ICT Advisor) daughter is Sophia,” the smiling Prime Minister informed the audience who were clapping loudly. 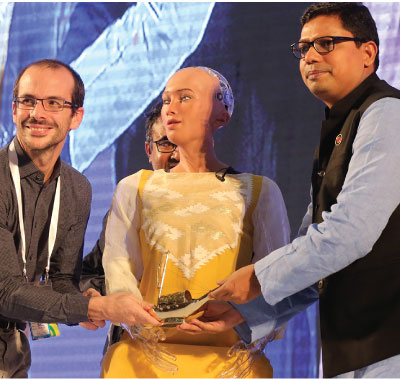 THE PRESENCE OF AN OSCAR WINNER

Another event that created much buzz in this year’s edition is the session of Nafis Bin Zafar, an Oscar winner from Bangladesh who has the experience of working with Hollywood big names and has earned a venerable position in the world’s topmost movie industry.

During a session on the second day, Nafees Bin Zafar spoke about his experience in Hollywood and said the easiest way to build a career in animation and software engineering is to start with simple ideas.

Nafees Bin Zafar won his Academy Award in the Scientific and Technical category in 2008 for his contribution in pioneering digital fluid effects which are now used throughout the visual effect industry.

“You do not need to start with a big project; your first step should be small and simple. You can be a storyteller or work for short film or a television show. You can also work in theatre. There is a lot of other things one can do at the theatre other than acting, like set designing and writing.”

At the session, Nafees spoke about his experience in Hollywood as a programmer and gave a motivational speech before the audience.

He said his journey from Bangladesh to Hollywood began in programming at the College of Charleston, South Carolina, US. After graduating, he joined a company named Digital Domain where he created “Fluid Animation” which was used in the Pirates of the Caribbean movie.

Over the past 17 years, Nafees has worked on many films including 2012, Transformers 2, and Kung Fu Panda 3. In 2015, he received another Academy Award for the development of the Drop large-scale destruction simulation system. 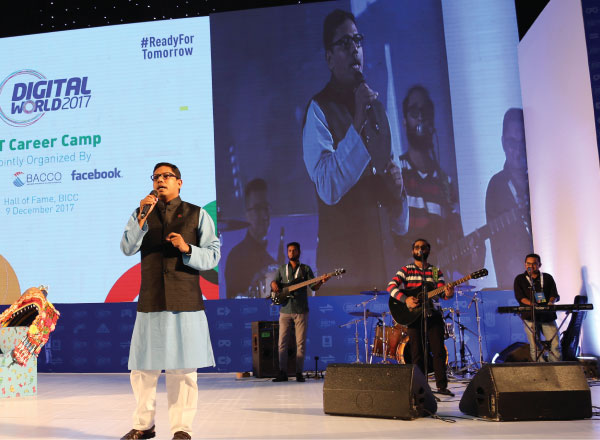 At the session, he said: “At the end of the day, animation is computer programming but it requires a lot of creativity and hard work. I had to work so hard in order to be what I am now. I can mix the arts and mathematics well and that is my talent.”

He told aspiring programmers to be inventive and independently creative without copying someone else’s work: “There is no shortcut to success, just work hard on your own ideas.”

A POSSIBLE INTRODUCTION OF BITCOIN IN BANGLADESH

Another important event of this year’s edition was the discussion on the possibilities of introducing cryptocurrencies like Bitcoin in Bangladesh.

The speakers at a session titled “The Prospect and Challenges of Digital Currencies in Bangladesh” talked about forming an inter-operative platform comprising of the central bank as well as other public private bodies with a view to expediting the penetration of digital currency in Bangladesh.

“By March 2018, four EFTs could be done in a day from an account instead of one now,” said Bangladesh Bank Deputy Governor SK Sur Chowdhury.

Chowdhury said the central bank is not against the use of any technology but people’s well-being had to be ensured first.

“The matter of the issuance of cryptocurrency by the central bank in the country still needs lots of research as it has both good and bad sides. We are seriously thinking about it,” added the BB deputy governor.

Cryptocurrency is a digital currency which can operate independently of a central bank, following a self-regulating system. Bitcoin, created in 2009, was the first decentralized cryptocurrency. Since then, numerous cryptocurrencies have been created.

Shahadat Khan, CEO of SureCash, a mobile banking service, said in his keynote speech at the event: “Digital currency can play a great role in fulfilling the vision of digital Bangladesh as world is moving into cashless economy.” 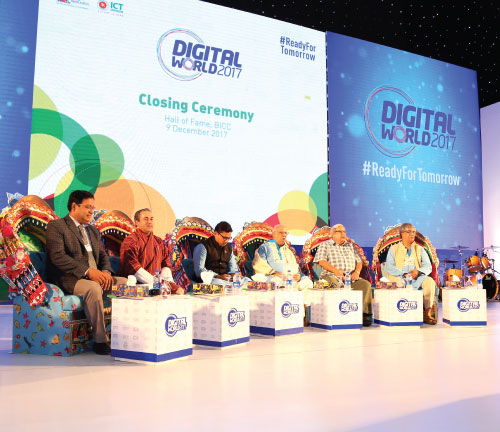 THE CLOSING CAME WITH NEW HOPES

At the concluding ceremony on the fourth day, a total 47 persons and organizations from different sectors were awarded for ICT-related innovation, innovative ideas or innovative use of ICT.

Speaking at the concluding function, Finance Minister AMA Muhith said Bangladesh has been able to reach the Digital World because of the country’s young generation.

He hoped that Bangladesh will also be able “to develop its own lifelike robot ‘Sophia’ at the next Digital World in 2018.”

State Minister for ICT Division Zunaid Ahmed Palak, who presided over the closing ceremony, said Bangladesh will soon become an IT hardware-exporting country.

He said the government is now setting up 28 IT parks in the country, which will create jobs for three lakh youths by 2021. Palak also said they are working to create jobs for 20 lakh youths in the IT sector by 2021, through providing them with IT education, training and other facilities. 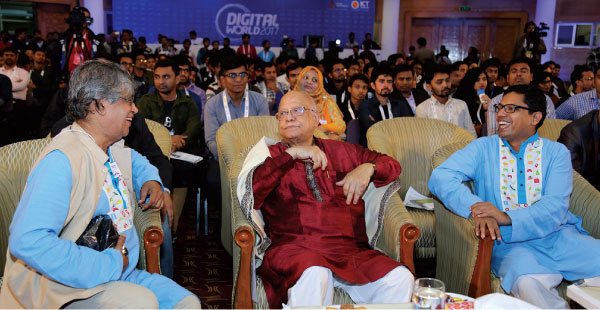 Bhutan’s Information and Communication Minister Lyonpo Dina Nath Dhungyel said their country wants Bangladesh to become a smart country in the near future.

President of the Bangladesh Association of Software and Information Services (BASIS) Mustafa Zabbar said Prime Minister Sheikh Hasina has taken the county’s IT sector to a new height.

He, however, said the country’s existing education system is not friendly to the digital age. “It won’t be enough for us to change curricula in higher education. We’ll have to change the curricula from the primary level education.”

Mustafa Zabbar expressed dissatisfaction saying, “Still, we need to pay 15 percent VAT and five percent surcharge to use the internet.”

The BASIS president urged the government to promote local software companies and local products for boosting the country’s IT sector.

ICT Division Secretary Subir Kishore Choudhury said the number of total visitors of the IT exhibition was more than five lakh this year.

Besides, he said, more than 19 lakh people visited social media live programmes of the exposition. ■ 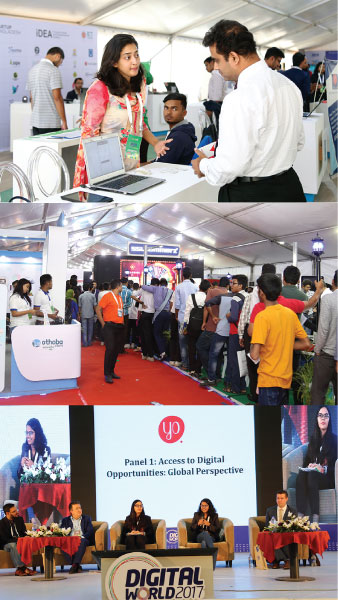 MAJOR EXPOSITIONS AT THE DIGITAL WORLD 2017:

This expo exhibited services and products of the Ministries and other Government institutions. Visitors came to know about the available services and can actually experience how the services can be reached.

Software Showcasing: It was an event where IT companies exhibited their products and services and demonstrated their capacity to innovate creative, challenging and mission-critical solutions. In addition to this, creative minds interacted by exchanging views and efforts were made to initiate enabling policy frameworks and future plans that can ensure optimum use of ICT to advance our society, economy, and business to be more competitive.

Mobile Innovation Expo: This was a platform where people from all around the world and Bangladesh showcased their innovation in mobile fields, such as applications, mobile gaming, and home automation by mobile and so on. 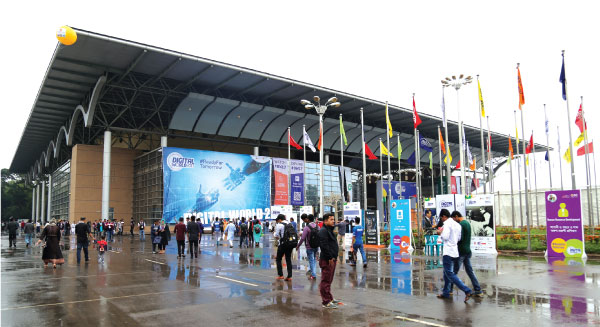 Made-In-Bangladesh Product Showcase: New products and services resulting from home-grown initiatives were brought to the public for showcasing how Bangladesh is getting ready to meet future challenges.

Startup Bangladesh: This was a platform where startups showcased their ideas and prototypes and were given exposure to potential investors and industry leaders. Moreover they had the opportunity to meet the stakeholders and try to find ways to grow.