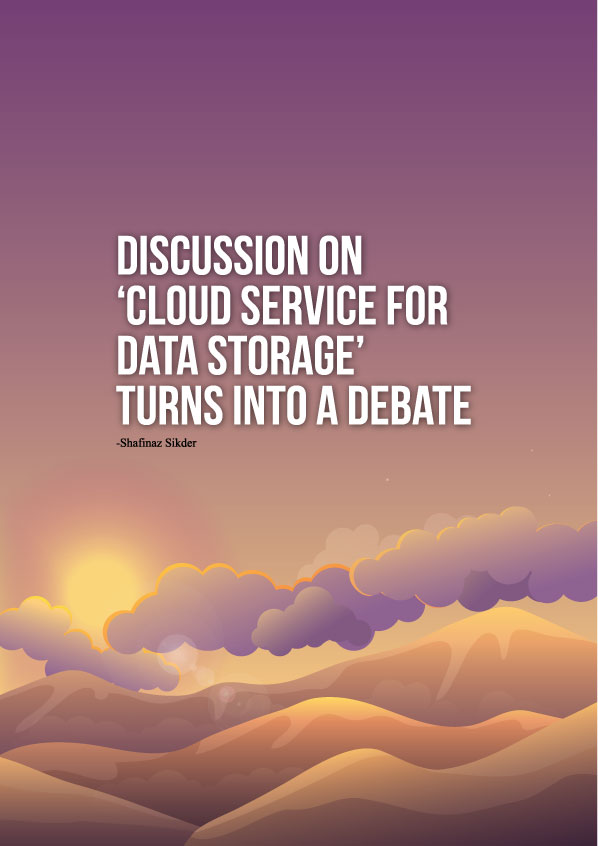 A seminar about ‘Public Policy for Financial Sector’ can barely enthrall anyone on a sleepy Saturday morning. The one with ‘that title’ held on the last day of the four day long BASIS Softexpo was no different.

At the forefront of the long-winded discussion on the topic was Craig Ower, the Chief Digital Strategist of APAC Enterprise Services. He started his speech with the idea of introducing ‘cloud’ for data storage. With his native US accent, he tried hard to enlighten us about how to transform the data storage system digitally through Microsoft’s cloud service.

“Cloud, a billion dollar investment which ensures data security is just another form of outsourcing. Its main activity is to ensure the security of customers’ data without touching the core systems of the banks”.

Therefore, he said, the bankers of this country should go and reach out for this software which will be operated by the outsiders. “I mean the USA,” he added

He continued talking about the different types of cloud operating systems along with their benefits.Those were obviously very technical and boring for a weekend morning.

Then things started to get spiced up.

Right after Craig’s speech, Sohail RK Hussain, the Managing Director of City Bank Ltd got the floor. He opened his speech by saying, “What Craig is trying to do is more of advertising of the Microsoft product than discussion about cloud service.”

“Our banks are not that much backdated till today, we have in fact improved a lot. If you look at the growing trend over the last decades you will find out how banking has been transformed in our country,” Sohail RK Hussain said.

Giving example, he said, the commercial banks of Bangladesh were the first institutions to take the tech into consideration. “The long queue was vanished off by the ATMs which were accompanied by credit and debit card users. Those toosoon become less important with the advent of internet banking which finally made banking possible with just some finger tips.”

The City Bank MD went on saying that through this entire shifting phase, the commercial banks of the country have developed their own security policies of providing services to the customers.

“We are reaching out to the tech savvy generation of ours through our own local ways and that is of course not without proper security like you mentioned,” he said pointing Craig.

Shamim Ahmed Chowdhury, Managing Director of AB Bank Ltd said that the main concerns for the commercial banks are cost and the cost reduction policies.

“We know that the new techs are hitting us almost every day but it will not be very easy for our banks to move to a complete new storage system of the customers’ information.”

“Just think of the cost”, he said.

“Besides, if we are to give up all the 56 physical branches of the banks, than we will be in trouble”, he added.

Farhat Sheikh, innovation advisor of the Access To Information (A2I) project of the Prime Minister’s office said that the Bangladeshi banks still have the majority of customers who want to visit the bank physically rather than relying on internet or mobile for doing their banking works.

“They will want a bank, a single place from where they will be able to pay all types of bills and that will not be far from his/her home”.

So reaching out to those poor customers and devising ways to give them the taste of modern banking service should be our first priority, said Farhat. “However, the question isshould Bangladesh go for the cloud service provided by a software company of USA or not”.

“So what will we do?” asked Sonia Bashir Kabir, the Managing Director of Microsoft Bangladesh.

Her question was well answered from Debdulal Roy, a General Manager with the IT section of the Bangladesh bank. He said, “Our government has not said anything about it”. “With respect to Craig, I am not actually against you or in favor of your idea but I have a question to you and the audience”.

“It is true that we lack security. Our customers are victimized to many local security problems and they are also seen to go to the court to file cases; but do you think the cloud service is completely risk free and is ensuring 100% security?,” he threw the question.

He went on asking –“What will we do when we will have problem with the software operated from a foreign country? How we will file a case if we lose some sort of data; and against whom?”

Addressing Craig and Sonia, Debdulal said, “We have not got enough support from the foreign countries on these types of matters and therefore it will be better for us to go for a ‘local cloud system’ if possible”.