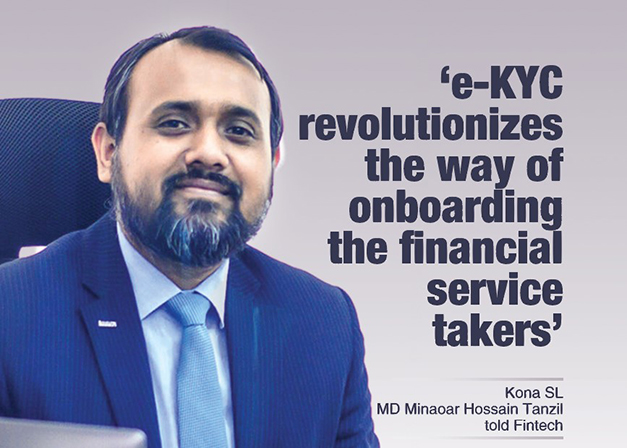 The process of knowing your customer, otherwise referred to as KYC, is what businesses do in order to verify the identity of their clients either before or during the time that they start doing business with them. The term KYC can also reference the regulated bank practices that are similarly used to verify clients’ identities.

Banks and companies of all sizes have become big supporters of KYC. It is increasingly common for banking institutions, credit companies, and insurance agencies to require that their customers provide them with detailed information in order to ensure that they are not involved with corruption, bribery, or money laundering.

Minaoar Hossain Tanzil, managing director of Kona SL told Fintech that for any financial service provider in the world, KYC is an important provision to learn more about customer. In our country, the banks free citation generator and the non-banking financial institutions (NBFI) needs to preserve huge paper works, in most cases 10-12 pages for a single customer, as part of KYC.

“This tedious process of paper works or manual labor used to beget a lot of problems as there were issues like process entry and preservation which took a lot of time and manpower. But with the introduction of KYC, the banks and the NBFIs now can get rid of these onerous tasks,” said Tanzil.

The central bank has been working for nearly three years on the e-KYC programme as part of its efforts to make the financial sector more vibrant. At the beginning of this year, Bangladesh Bank (BB) had published the first guideline about the e-KYC. The BB said the main target of the e-KYC provision is easing up the process of the on-boarding and preservation of the customers.

Tanzil said, for opening a mobile financial service (MFS) account, a new customer earlier needed to bring his NID and photo and needed to stay in line in front of an agent to get his paper works done. Later he needed to take that completed form to a distributor and the whole process used to take a lot of time.

“In last year, we worked with Post office’s digital service Nagaad and we transform the whole onboarding service into a digital platform. Now, if a customer wants, he can open his own account, or if s/he wants can go to an agent and ask him/her to open it which doesn’t take much time,” said Tanzil.

Tanzil said as the whole process of opening an account is now digitized, the human intervention in the back-end has gotten minimal. Now the whole process can be done through machine learning. Many said that by looking at the photo of NID, it is difficult to cross-match and verify a person but that’s not true. It is possible to make a positive identification in 90 percent time through machine learning. It was an amazing discovery for us. The chance of making a mistake here is very low, so e-KYC has lessen the chance of making mistakes which were earlier prevalent during the time of manual KYC, said Tanzil.

Tanzil said the whole technology service of Nagaad is provided by Kona SL. All of Nagaad’s backend system, mobile application, agent management, and cash management are done by Kona SL. Aside from Nagaad, Kona SL is providing the KYC engine to the Rocket of DBBL, Nexus Pay and agent banking.

About giving different services to DBBL, Tanzil said, they have started working with DBBL in December 2018. “Whenever DBBL needs to verify information about a customer, they use our engine. We also conduct biometric verification, NID verification for them through our engine,” he said.

When asked about the importance of having e-KYC provision in Bangladesh, Tanzil said, “The e-KYC service is perfectly applicable for a country like Bangladesh. “The usage of mobile telephone is increasing in Bangladesh. Most of the people now own a handset which has camera. So it has now become very easy to grab a photo and get the registration done within a few minutes. Earlier those were the part of hassles which many customer didn’t want to take,” he said.