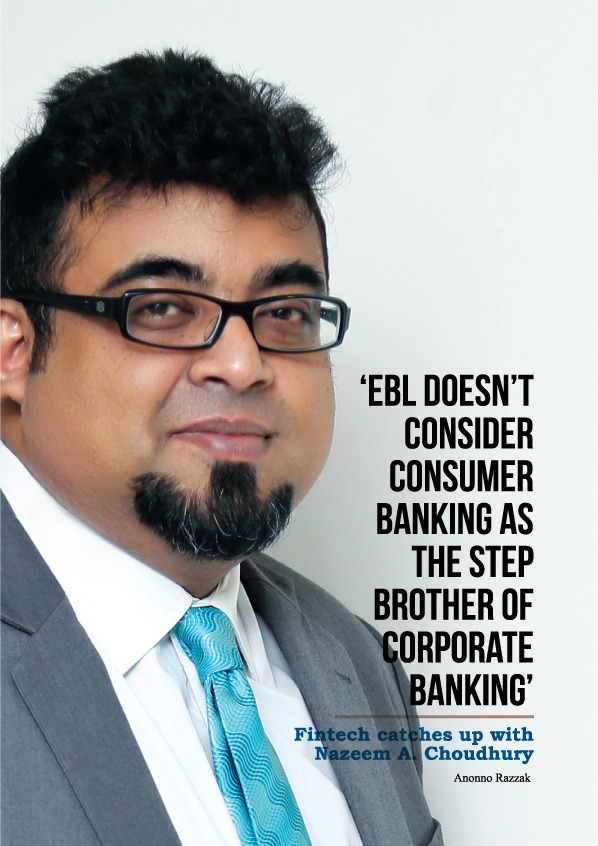 Mr. M. Nazeem A. Choudhury has more than 16 years of experience in banking, sales & marketing, communications and media. He joined in EBL on March 15, 2007. In EBL he successfully played the role of Head of Consumer Business, Head of Cards and Head of Marketing. In his career he also worked for American Life Insurance Company and BEXIMCO Pharmaceuticals Ltd. He has obtained his MBA degree from the Institute of Business Administration, the University of Dhaka and had his MA & BA (Hons) in English from the University of Dhaka.

Nazeem A. Choudhury has a laidback presence. But outer appearance often deceives as he is as agile in decision making and problem solving as a banker possibly could be. As the head of consumer banking of

Eastern Bank Limited (EBL), he is known as an achiever in the banking community of Bangladesh as for the last five consecutive years, EBL is getting the best consumer bank award from The Asian Banker. Fintech recently interviewed this consumer banking expert and tried to understand the secret of EBL’s success.

FINTECH: EBL is getting the best retail banking award from The Asian Banker for five consecutive years? What is the secret behind the success?

NA Choudhury: First of all, I would say that having this ‘award’ just for retail banking is an understatement for a bank like EBL.

If you look at the criteria basing on which The Asian Banker gives us the award, then you will understand what I am saying. There are nine criteria according to them. These are people training, compliance, new products, innovation, digital channel penetration, quality of customers, consistent business performance and market expansion.

The Asian Banker award is also different from the other awards. In other banking awards, you have to participate with your banking performance portfolio whereas in The Asian Banker award, they make independent observation and survey and they select the bank basing on their performance-again in an independent manner. So, when you get that award for five years in a row, then that means you are obviously doing something right. And the lion’s share of this credit, I think, goes to the people of EBL. If you compare EBL commercial banks of same size, you will find that we have half the manpower than those have. In our consumer banking section, only 1200 to 1300 people work whereas in other commercial banks of the same size, more than 3000 people work in the consumer banking section. So I can say that our manpower is more agile and they are working hard for maintaining quality delivery and services to the customers.

FINTECH: So how EBL made that possible with such small manpower? Better technological adaptation than any other banks?

FINTECH: The designation of the EBL employees are like those of the foreign banks rather than the local commercial banks. Does EBL follow the system of foreign banks?

NA Choudhury: Here I’d like to say that we have taken out the best out of foreign bank while at the same time we have mixed it with local cultures and customs to bring out the best possible results. So it’s a kind of hybrid banking way. Frankly speaking, if you want to learn something about banking, you need to learn from the best global banks. So we have tried to learn from their best practices. Meanwhile, as local commercial banks we have some regulatory edges over the foreign banks and we tried to capitalize on those edges. I think these attitudes of us dovetail.

NA Choudhury: For successfully doing corporate banking, you can apply general banking formula. If you know the formula of trade bank or trade marketing, you can do corporate banking and that will not vary much from countries to countries. But for doing successful consumer banking, you have to be aware of the people, their local culture, practices and norms. You have to produce banking products as per the demand and need of the people. The large global banking giants don’t want to go through the hassle of investing their manpower on consumer banking as in terms of bringing banking revenue, the consumer banking is no match to corporate banking. EBL however wants to create a balance between these two.

FINTECH: In the banking world, there is a saying that the corporate banking section considers retail banking to be its step brother and senior management 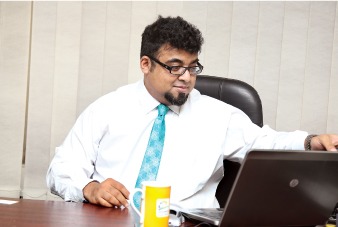 NA Choudhury: May be. We leave it on to customers to decide. All I can say is that our Managing Director (MD) and the board don’t consider retail banking as a step brother of corporate banking. In fact they are very much retail focused. It’s not an easy decision for the board and management though. Because, in corporate banking, you are dealing with per say 500 customers who account for 80% of your bank’s income. You just employ 105 of your manpower there. At the same time, nearly 90% of your manpower is engaged in retail banking which just account for 20% of your revenue.

Now forget the revenue. Think about bank’s identity. The persons working to bring 20% of your bank’s revenue are building your bank’s brand and thus bank’s trust. In corporate banking, your bank is known to those 500 CEOs or CFOs of those companies, but in retail banking, your bank will be known to five lakh persons. Basing on their feedback, you will be known as a good bank or bad bank. So on that aspect, retail banking is very important.

Secondly, it is about opportunity. Decades ago, the banks were probably doing corporate banking with those same 500 men. Ten years back we had 10% population under banking network in our country and now it has grown to be around 20-25%. Still there are scopes for doing banking with the rest 70%-75% population of the country. That banking will obviously be done through retail banking; so future opportunity lies in retail banking.

Besides, you have to understand that corporate banking is high risk banking. If one of your large borrowers becomes defaulter, your bank might fall into serious trouble whereas to incur damage of such scale in retail banking, hundreds of thousands of your customers have to become defaulter. So in terms of risk management, retail banking has an edge over corporate banking. 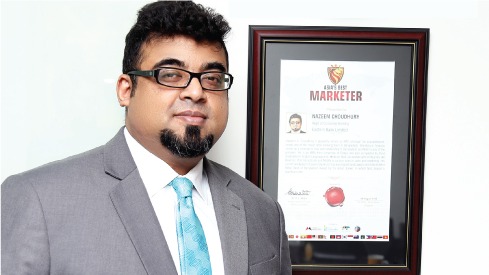 FINTECH: So how this 100% population will be brought under the banking network? Will it happen through agent banking, mobile banking or what?

NA Choudhury: It doesn’t really matter. It can come through any medium. Time will tell which medium will become prominent and which one will be obsolete. People don’t keep their money under their pillow anymore. They want to keep it in bank. So if they prefer agent banking as an easier option, they will do it in that way. If they find that mobile banking gives them hassle-free scope, they might prefer to do that in that way. The point is these are all channels and the truth is the channels cannot dictate customers rather the customer choose the channels. Branches are physical channels and the others are digital channels. The important thing is whether the money is being transacted through legal channels.