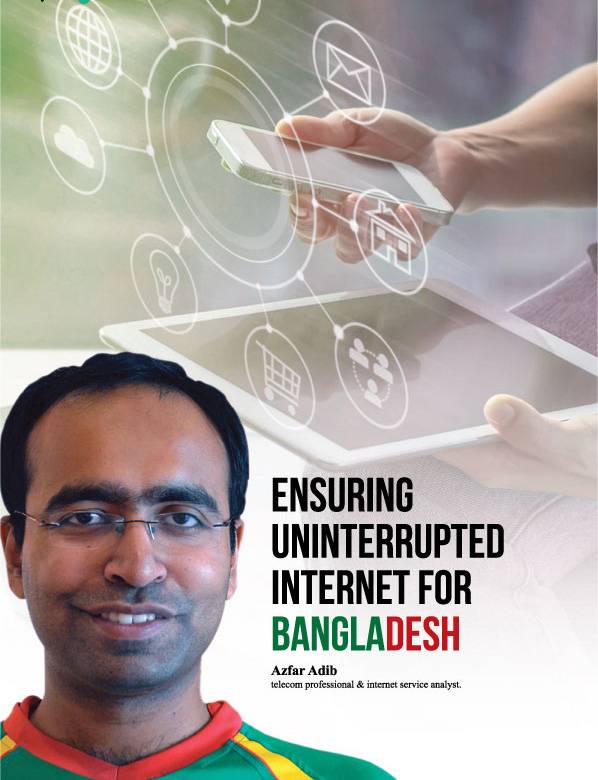 In recent times, internet users of Bangladesh faced significant problems (slow data speed resulting in longer time to load webpage, file, video and other contents) on several instances. A major interruption occurred during October 22, 2016 to November 26, 2016, when some maintenance work took place in the international submarine infrastructure. Another outage occurred after a cyclone hit the south Indian city of Chennai on December 11, 2016, affecting undersea digital cables.

To get some deeper insight, let us have a look at how Bangladesh is currently connected to global internet. The first route is the direct access to the submarine cable segment SEA-ME-WE-4 through the landing station in Cox’s Bazar, which has been running since 2006 by BSCL (Bangladesh Submarine Cable Company Ltd). Second option is International Terrestrial Cables (ITC) that provides backup connectivity through India. Currently, there are seven licensed ITC operators in Bangladesh, who in collaboration with their Indian partner operators, carry internet traffic towards submarine cable landing stations in Mumbai or Chennai .

So internet service in the country naturally got degraded when a major maintenance work took place in SEA-ME-WE-4 during last October and November. Similar problems repeated in mid-December when the submarine cable landing station in Chennai got severely impacted due to cyclone, deteriorating performance through the ITC path. In terms of capacity, about 55% of our bandwidth is available with the submarine cable (directly accessed through Cox’s Bazar landing station) and rest 45% in ITC paths through India. Therefore, problem in any of these two paths significantly impact overall internet service in the country

So, it is quite obvious that redundant and more versatile traffic paths are essential to ensure smooth and uninterrupted internet service for the country in any situation. Now the question is, apart from two existing connectivity schemes (Submarine Cable SEA-ME-WE-4 and ITC through India), what are the other possible options? Can there be other submarine cable network, other ITC path or any completely different mechanism?

Bangladesh is now gradually getting connected to a second submarine cable network SEA-ME-WE-5 through a newly established landing station in Kuakata, Patuakhali. This project is worth USD $70 million (facilitated through both local and foreign funding) and has been running since March 2014 when BSCCL entered into an agreement with 14 foreign companies to build and maintain it. It is expected to provide Bangladesh additional 1,400Gbps bandwidth, and most importantly it can keep the country online even if one connection (existing SEA-ME-WE-4) completely goes down. Despite having an initial completion target by first quarter of 2016, the project has been delayed (mostly due to local connectivity challenges).

Since 2012, some activities have been going on to establish another ITC path through Myanmar towards Pyapon landing station, for getting connected with the submarine cable network SEA-ME-WE-3. However, different bottlenecks, particularly critical bi-lateral issues in recent times have been hindering this plan.

Apart from cable based solutions, another option for internet access is through satellites. Such a scheme (VSAT connectivity) was used as the sole medium for internet access in Bangladesh during 1996-2006 before getting linked with submarine cables. Due to coverage and capacity issues, use of satellite based internet connec tivity is quite limited. It is mostly used in very remote or isolated locations where terrestrial connectivity is not possible. For example, recently, giant internet players like Google and Facebook have been trying to establish own satellites for providing internet access in remote corners of the world.

However, is it always necessary to use global connectivity for availing any content over internet? Not always. Because if a content is locally cached or linked; it can be served directly without 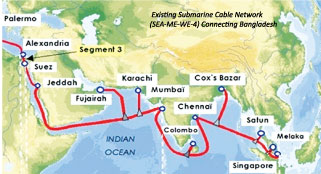 repeatedly accessing the global internet path. For example: Google caching solution is used by several operators in Bangladesh. In case of highly popular Google contents (based on local user’ choice); it first fetches those contents from main Google servers, keeps and serves those from its own local storage and knocks the main server only if there is any content update. Similarly, some local websites, which are linked to interconnection exchanges, can be accessed directly through local path. So such schemes should be further promoted to reduce the dependency on international bandwidth.

As the country is moving fast in digitalization journey, ensuring consistent and high quality internet service have become quite important. Also, Bangladesh is earning some foreign currencies by exporting excess bandwidth to neighboring countries (already started with the Indian state of Tripura, may have Nepal and Bhutan on-board soon). So, it is highly necessary to ensure uninterrupted internet in any situation, through proper utilization of all possible schemes.