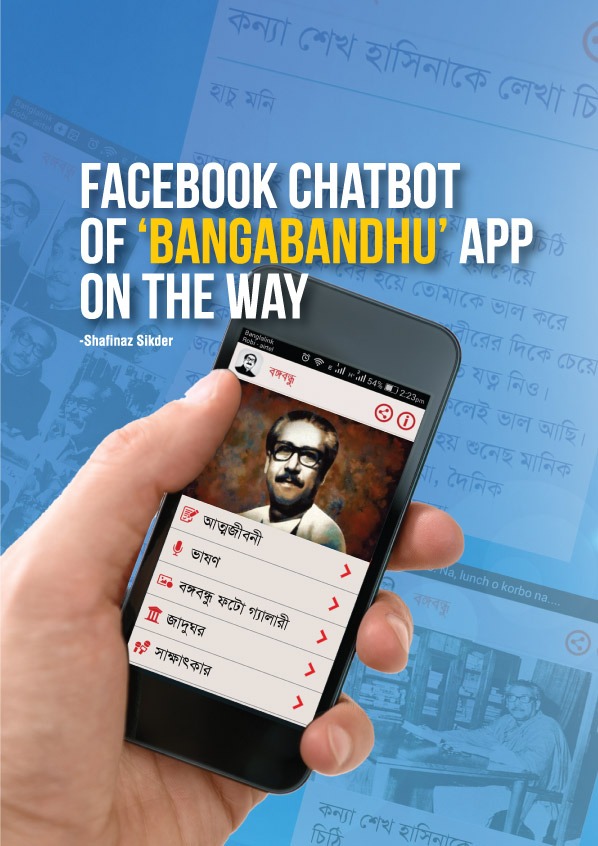 Want to hear Bangabandhu’s historic speech of March 7 ? Sneak a peek at the father of the nation’s private life in House-32 at Dhanmondi? Or want to read a PDF copy of Bangabandhu’s autobiography-‘The Unfinished Memoirs?’

A mobile app named ‘Bangabandhu’is there to cater to all of your needs and many more.

The app was developed in 2014 under a joint collaboration between ICT Division of the government and MCC.Co.Ltd. Now after three years and about 86,186 download later, the app is going to have new dimension and will be made available in facebook chatbot.

Chatbot is the latest technology in the world of social media messenger wherein a computer programmemimics conversation with people using artificial intelligence. A chatbot can transform the way people interact with the internet from a series of self-initiated tasks to a quasi-conversation.

Facebook has already begun adding chatbot-esque features into the DNA of Messenger through its “M” AI assistant, but the company wants to create the platform to enable automated interactions between users and businesses as it looks to make pages the more default online homes of brands and Messenger the way you communicate with them.

Ashraf Khan, Managing Director of MCC.Co.Ltd said that they had been updating the app with new features since they uploaded in the Google play store.

“Now, we plan to introduce it in Facebook messenger considering the increased engagement of young generation with the Facebook,” Khan said adding that a proposal about this is already sent to the ICT Division.

He said that all the information available in the app will be available in the facebook chatbot. Explaining the operation of chatbot, he said chatbots allow you to search for the info in natural conversational language as compared to search engines where you will have to input not so natural ‘keywords’.

“Suppose you open your chatbot and casually place a command to find you a picture of Bangabandhu with his daughter Prime Minister Sheikh Hasina. The artificial intelligence (AI)embedded in the chatbot will find you that picture,” he said.

The app has a photo gallery containing 113 rare pictures. Based on Bangabandhu’s life, the app contains audio and video contents on different events of his life, as well as songs and quizzes. Results of the quizzes can be shared on Facebook.

Khan urged the people, those who got a rare collection of Bangabandhu’s photo, to share documents with his firm. “This will enrich the library of our app.”

It is to be noted that an open platform is also being added to connect Bangabandhu’s publications and letters to the app.

Khan also said that they are now working to include multi-lingual option in the app. “We have already received permission from the ICT division for this. Pretty soon, the app will be available in multiple language.”

Now with new features and update,when the app is opened, one would find six sub-menus – autobiography,speech, interview, letter,Bangabandhu Photo Gallery,Bangabandhu Museum at the main menu.

When entering autobiography, two more sub-menus will be found in short biography and unfinished autobiographies.

In short life section, the activities of Bangabandhu can be known indifferent events from 1920 to 1975.Here is a continuation of how a common son born in Tungipara, Gopalganj, became a father of a nation.

In the private menu, scanned copies of many letters written by Bangabandhu can be found.Bangabandhu wrote these letters to his father, political colleagues, wife and children in prison while in prison.