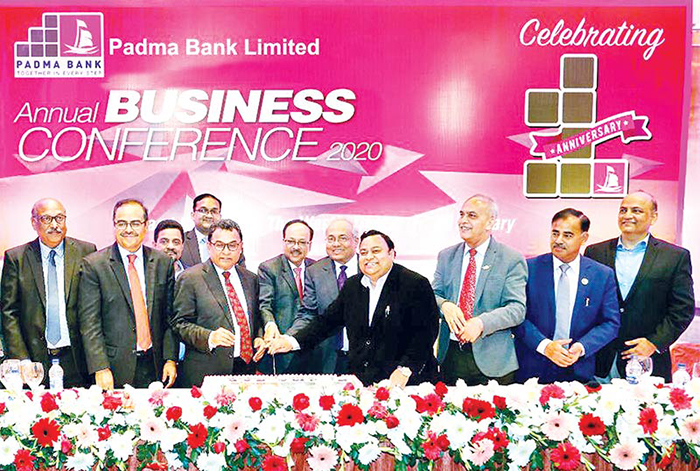 Finance Minister A.H.M. Mustafa Kamal has said Tuesday he hoped Padma Bank would be listed in the share bank in the next one year after the fourth generation bank successfully passed one year of its new journey.

The finance minister made the comments at the first anniversary and annual business conference of Padma Bank at a city hotel last month, where dignitaries, board members and the senior management of the bank were present.

Chairman of the bank Chowdhury Nafeez Sarafat presided over the ceremony.

Kamal said just a year after Padma was relaunched under a new name it gained trust of its clients with a flurry of new saving products and agreements with some of the world’s largest money exchange companies.

“I hope the bank will float shares in the stock market within the next one year. The prime asset of a bank isn’t its cash reserve, rather the trust it creates among its clients. Padma Bank has earned that trust,” he said.

Banking Division secretary Md Asadul Islam spoke on the occasion and expressed his firm believe Padma would march forward through its exceptional teamwork.

“I hope it will turn into a model financial institution of the country after overcoming all previous odds. The best thing about the bank is that it has made rapid strides by utilising its own resources and new technology,” he said.

Managing Director and CEO of Padma Bank Md. Ehsan Khasru highlighted the first year’s achievements of Padma, saying the bank has turned around from its heady days two years ago. “In 2018, our classified loan was 375 crore taka. In 2019 it stood at 800 crore taka and this year it expected to hit 1,100 crore taka. In 2020 we want to make cash recovery of 405 crore taka,” he said.

He said Padma has rolled out ambitious plan to emerge as the country’s best digital bank. The bank has already launched four new application software, Padma Click, Padma Digi, Padma I Banking and Padma Wallet in an effort to make banking easier for the clients, he said.

“Our Advance Deposit Ratio is now better than two years ago. Also by 2020 we want to bring down the bank’s ADR to less than 100 percent,” he said.

Nafeez Sarafat thanked the bank’s clients for keeping their faith in the bank and for injecting new deposit. He said Padma would commemorate the hundredth birth anniversary of the Father of the Nation Bangabandhu Sheikh Mujibur Rahman with events and festivities.

“We want to celebrate the Mujib Barsha the best way possible,” he said.

Chairman of the Sonali Bank Ziaul Hasan Siddiqui in his brief speech also shed lights on Padma’s successes, saying the bank has achieved financial goals in scaling up its deposits and recovery.

“It is true the bank faces many challenges. But at the same time Padma has also immense possibilities,” he said.

Eleven officers who achieved major successes in collecting deposits and recovering loans were presented prizes during the program.

The bank has made digital banking easier for its clients in all 57 branches after it rolled out four new software called, Padma Click, Padma Digi, Padma I Banking and Padma Wallet. The Apps, which have fool-proof security system, are aimed at expanding the bank’s digital footprint and boosting financial inclusion in the country.