You are here
Home > Editorial > From The Editor September 2018
Dear readers,
Tech startups have literally changed economies across the world and have come to define how people conduct their day-to-day work. Companies like Google, Facebook and Amazon have become torchbearers of what it means to disrupt economic and financial ecosystem and create a paradigm shift. Following in their footsteps, there has been a rapid evolution in tech startup, which further impacted the commercial system. Bangladesh, too, is participating in the movement of tech startups, giving rise to private and government involvements in the startup ecosystem.
And yet, there isn’t much of an ecosystem to speak of. Consequently, tech startups fight an uphill battle and one of the ways this struggle manifest in the real world is the hardship of setting up the physical office space in commercial areas, because of the high cost of office space. Tech startups often, almost invariably, end up setting up in residential areas, where they face lack of space for installing things like data centres, customizing office space among other problems.
In this issue, the cover story sheds more light on the situation and looks at the problems arising from this limitation, but also some of the positive impacts that result from the otherwise disadvantageous situation. It looks at the reasons and current situation of starting a tech startup office in residential areas, with comments from people involved in the relevant fields. The three-part story also provides a snapshot of the tech-startup situation in this regard from other parts of the world.
The interviews are there, as usual, containing an in-depth conversation with Farhana A Rahman, Senior Vice President of BASIS about her role as a successful entrepreneur in the IT sector of Bangladesh. There is another MFS – ‘t-cash’ – that just entered the market with a full rebranding, and to know more Fintech talked to Junaid Masroor, the CEO and DMD of Trust Bank, which launched this service. As one of the primary purveyor of fintech, commercial banks continue to be a focus area for this magazine. Like in other issues, Fintech interviews the movers and shakers in the banking sector. This issue includes interviews with Nazmur Rahim, Head of Retail Banking and SVP at BRAC Bank and Tamal SM Parvez, Chairman, NRB Commercial Bank Ltd where they share their valuable thoughts on technological innovations in banking and the banking sector as a whole. 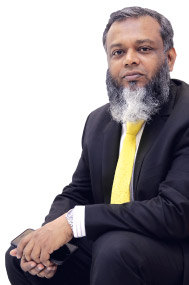 As always, there are a variety of topics covered including a feature on the much talked about EVM machines that are likely to be deployed in the upcoming national election. Other features cover everything from news relating to blockchain to what’s happening in the IT and financial sectors.
Finally, we always love to hear from you – the reader and we welcome both a word of encouragement, suggestions or criticism.
Editor
Md. Mizanur Rahman
Share on Facebook Share
Share on TwitterTweet
Share on Pinterest Share
Share on LinkedIn Share
Share on Digg Share