You are here
Home > Tech > Going digital for the elite force of Bangladesh: POLICE 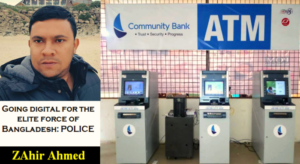 We talk about the word digital in Bangladesh from 2009 since the return of AL government in power where a massive change in digital communication has seen. In the government sector I am working now is the elite force of our country that is  POLICE, the current force strength is 200k+ who are working geographically scattered all 64 districts 24/7.

This is the story of making life easy for the elite force and enabling them with basic banking services even in the remotest police Fari at a hilly district.

We are not perfect but we can say we tried …

A veteran banker committing to give modern banking service to the elite police force joined as MD and CEO for the new kid in the banking industry called Community Bank Bangladesh Limited. Being humble and down to earth was in his veins and he just started his mission at a shared office at the rooftop of Police Headquarters in Dhaka. Starting from scratch isn’t that easy, you have to recruit the right person at right place to give it a go. That is a long story of how we started but today, I am here to talk about the making our elite force happy within a shortest possible time that is within 5 months of launching, how we reach out 64 districts with service desks and installing 100 ATMs nationwide giving services to the 200k elite forces…

The beginning with ATMs

First thing, after I joined in this bank was to select the ATM vendor and start the game right away. The aim is to ensure the salary of the elite force who are waiting for quite long to see their bank working for them. Here it is important to mention that almost all the police member has contributed from their salary to raise the huge 400 crores initial capital of the bank since 2016. Finally,we have approach to the Bangladesh bank to start banking activity. So naturally the expectation level of the elite force will be sky high. So back to my ATM procurement story, one of our Chinese vendors told us that their ATM can operate in any given situation not required air-con and can survive in harsh conditions. And this magic word shows us the way to rollout ATMs as fast as possible avoiding conventional ATM installation with air-con and separate gated room. It is important to mention that the account opening of the all force was done during the pre-launch stage working extensively even in the month of Ramadan.

Now it’s time to rollout the ATMs and we started communicating with the commanding officers and began ATM installations fast and flawless. Now the challenge is to ensure smooth replenishment of these vending machines that is placed in the barracks. In order to do so in Dhaka and outside Dhaka we have to appoint the experience partners who are already working with the banks who has nationwide ATM network. So replenishment issue was solved through partners, the ATM vendors started supplying and commissioning ATMs and the stakeholders in every district giving us their full supports to make this banking vision alive.

Service Desk an instant solution for the banking service…

ATM can solve your cash receiving issues but what about other banking service such as DPS, FDR, general banking services or loan file. Again the idea came from our top management to launch the service desk concept in each district to cater the above services for the force as we do not have much branch network in these initial days. You cannot have branches in all districts within few months because the process of branch launching has a list of tasks and approval from the regulatory body which sometimes become time consuming. So manned service desk and ATM booth was the way out solution for us, paving the road towards fulfilling the banking dream of the elite force.

Understanding the need and a tailor made solution….

Being grownup in a police environment gave me some sort of upper hand in understanding their pulse and need. As our Managing Director knows this fact so he engaged me to solve those issues which are related with the force ensuring faster execution and implementation. Taking to the commanding officers and convening them to get the places for our Service Desks and ATM installations was part of these daily works. During this rollout time we had touched down more than 41 districts physically and the team covered the rest of the districts. It was a journey on a Honda CR-V SUV with All-Wheel Drive (AWD) where we had to change all four tires along with front shocks but rest are fine as the vehicle is very much dependable in harsh conditions. It was a journey from Teknaf to Tetulia. The eventful travel story will require another article to cover.

Commitment towards duty and beyond

Now that we have done our milestone of reaching out all the 64 districts with our manned Service Desks and almost all districts with ATMs within 5 months of launching, we can say we have done something to fulfil the dream of the elite force who usually do not get use to new things in their regular job. You feel you have done something when you see a policeman can withdraw his/her salary from the modern ATM machines for the 1st time avoiding hand cash which was present until now in many districts of Bangladesh.

Most of us do not know that the force does not had the access to banking loan service previously and they had to borrow cash for urgent need from different samities and NGOs with highest interest rates. Their own bank came to make their life easy availing bank loan for the 1st time. Now they can apply for loan and can solve their problems. Some of them can start alternative income by investing the amount in different ventures. The financial inclusion among these mass government employees will open a new window of opportunity for sure.

This is our story of giving basic banking service to the unbanked mass police force and we are happy to serve them. And the story starts here.

The writer is currently working as Head of ADC, Community Bank