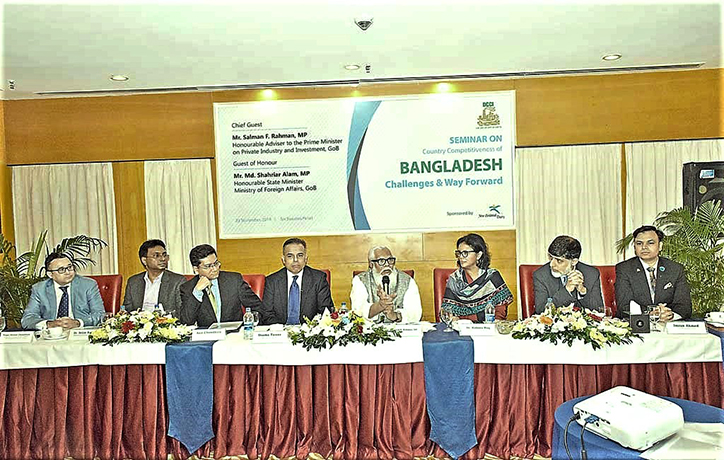 Osama Taseer, the president of Dhaka Chamber of Commerce and Industry (DCCI) puts emphasis on working hard to expand the competitiveness. He said, “Bangladesh should develop its position in the World Bank’s Ease of Doing Business Index and the Global Competitiveness Report of the World Economic Forum”.

Taseer said this attending at a seminar titled ‘Country Competitiveness of Bangladesh: Challenges and Way Forward’ organized by Dhaka Chamber of Commerce and Industry (DCCI) at a city hotel on November 23, 2019.

Bangladesh stands at the 105th position in the Global Competitiveness Report 2019 out of 141 countries, whereas the country’s ranking rose to 168th in the Ease of Doing Business Index 2020, up from 176th in the previous year, reports the Daily Star.

“The government’s fast-track infrastructure projects will assist competitiveness of Bangladesh,” Taseer said in a statement.

Rubana Huq, president of the Bangladesh Garment Manufacturers and Exporters Association (BGMEA), said, apart from the readymade garment sector, the country needs to emphasis on the variation of other sectors to compete in the international market. She urged inter-ministerial coordination for smooth decision-making processes as well as innovation and research and development in the garment sector for its sustainability.

“To attract large scale FDI and diversify exports, the special economic zones (SEZs) can be the game changer and despite FDI to gross domestic product (GDP) ratio being lower, the country is doing better in attracting it”, added Raihan.

He suggested to undertake reforms in critical economic domains and called for faster and cost-effective implementation of mega projects and skill development.

Salman F Rahman, adviser to the prime minister on private industry and investment, said, “By 2021, Bangladesh would be able to improve its position to double digit in the Ease of Doing Business Index.

He said Bangladesh has accomplished tremendous success, especially in the agriculture sector. Giving importance on diversification of agro-products to boost exports from the sector Salman said, access to finance is still a challenge for entrepreneurs.

Besides, Anir Chowdhury, policy adviser of the Access to Information (a2i) Programme of the ICT Division, Ahsan Khan Chowdhury, chairman and CEO of Pran-RFL Group attended the meeting with the delegates think to modernize and update its existing education system to create a skilled workforce which will take up the challenges of the Fourth Industrial Revolution.

All the business leaders of the seminar agreed unanimously that developing the competitiveness, Bangladesh has to develop the port facilities on priority basis.