Bazlur Rahman Khan knows the peril of Hajj too well. The entire process—starting from registration to obtaining a visa to getting on a bus in Mina—is no cake walk and Rahman, a five times performer of Hajj, is well aware of it.

But this time around, Rahman is a bit relaxed than before. “Smartphone has truly made our life easier than before. I have downloaded the app Hajj Guide in my phone and it really comes handy each time I need to get updated about any information.”

He said the app is so comprehensive that it even gives him daily updates about news surfacing from different Hajj venues. “It has a Hajj bulletin which sort of works like a portal that gathers news from different media and show it in one platform here.”

It even shows a live function: “What do I do if I am lost? Where do I go for help? I am really happy with the services I can get through this app,” said Rahman.

WHY DIGITAL MANAGEMENT FOR HAJJ?

Business Automation Ltd (BAL), a Bangladeshi software company, has developed the app Hajj Guide for the android mobile platform. As of now, the app has been downloaded more than 21,000 times.

BAL is no stranger in developing and providing a digital tool about managing Hajj pilgrims. For the last two years, the software company has extensively and exclusively worked with the Religious Affairs Ministry of the government to digitize the whole process of Hajj management.

Shoeb Ahmed Masud, Director of BAL said Hajj is one of the largest and most diverse gatherings of people anywhere. It poses near-insurmountable logistical challenges for its Saudi organizers as well as for the governments of the countries from where the pilgrims come.

“It also poses challenges for individual pilgrims, who must negotiate confusing, unfamiliar, and sometimes unsafe surroundings, often on little sleep and a long way from home.”

Masud said in recent years, smartphones have changed the fundamentals of international travel: People carry in hand the means to seek information, view maps, and book transportation and lodgings.

The vast majority of pilgrims — known as hajjis — still do the Hajj the old-fashioned way, by booking group tours that take care of everything from plane tickets to hotel bookings to visits to the holy sites, said Masud, who is also a Vice President of Bangladesh Association of Software and Information Services (BASIS).

“But there are smartphone applications for everything, and the Hajj is no exception. More than ever before, Hajj DIY (do-it-yourself), navigated by smartphone, is a real option,” He said. 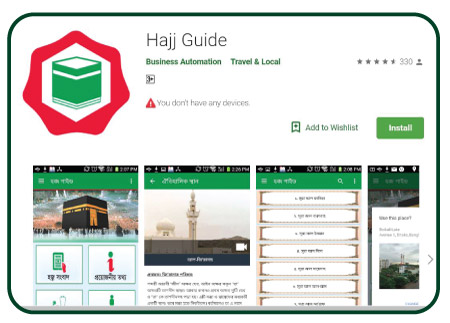 Masud said before designing an app that can cater to most of the needs for the pilgrims, they first need to help digitize the whole Hajj management system of the government.

“We have been working with the Religious Affairs Ministry in the last few years to develop its Hajj management portal. In that portal, one aspiring pilgrim can find and download all the government forms needed for performing Hajj.”

A pilgrim can get digitally registered through that portal and once s/he has done it, all the information of that pilgrim becomes available at both the managing end and in the subscribers’ end.

Masud said two separate management modules, namely, Hajj Pilgrim Management and Hajj Agency Management have been developed to give both individual pilgrims and the agency access to all the functionalities needed for getting relevant information.

He said, after developing the portals, they thought of bringing all the functionalities to a mobile app so that Hajj management could get more mobility.

Apps that cater to pilgrims specifically have cropped up in recent years. The rituals that hajjis perform are often complicated, and if not done correctly, can negate the validity of one’s pilgrimage.

For centuries, specialized Hajj guides have ushered groups of pilgrims from site to site, instructing them where to walk, when to pray, when to recite passages from the Quran, and when to perform small symbolic tasks such as clipping fingernails at one particular station in the Masjed al-Haram — the mosque built around the Kaaba, the holiest place in Islam.

But now, interactive smartphone apps such as 3D Hajj, HajjSalam, Hajj Guide, and Smart Hajj, all available for download, provide step-by-step instructions for each stage of the pilgrimage.

Hajj Guide, the app developed by the BAL has incorporated a large number of functionalities and customized those for the Bangladeshi pilgrims. “If you go to google play store and search, you will find a lot of apps related with Hajj. But Hajj Guide gives you a comprehensive package.”

Aside from all the available functionalities that the BAL-developed Hajj management portals give, the app also has a lot other functions. “It even gives a pilgrim a reminder about reciting certain Suras.”

Md Hafiz Uddin, Joint Secretary (Hajj) of the Ministry of Religious Affairs said that because of digitization, the hectic task of managing Hajj has become a bit easier in the last few years.

“The news about mismanagement of Hajis still comes in the media and those are true because those people are beguiled by dubious agencies. I believe, within few years, we will be able to automate the whole system,” said Hafiz Uddin.