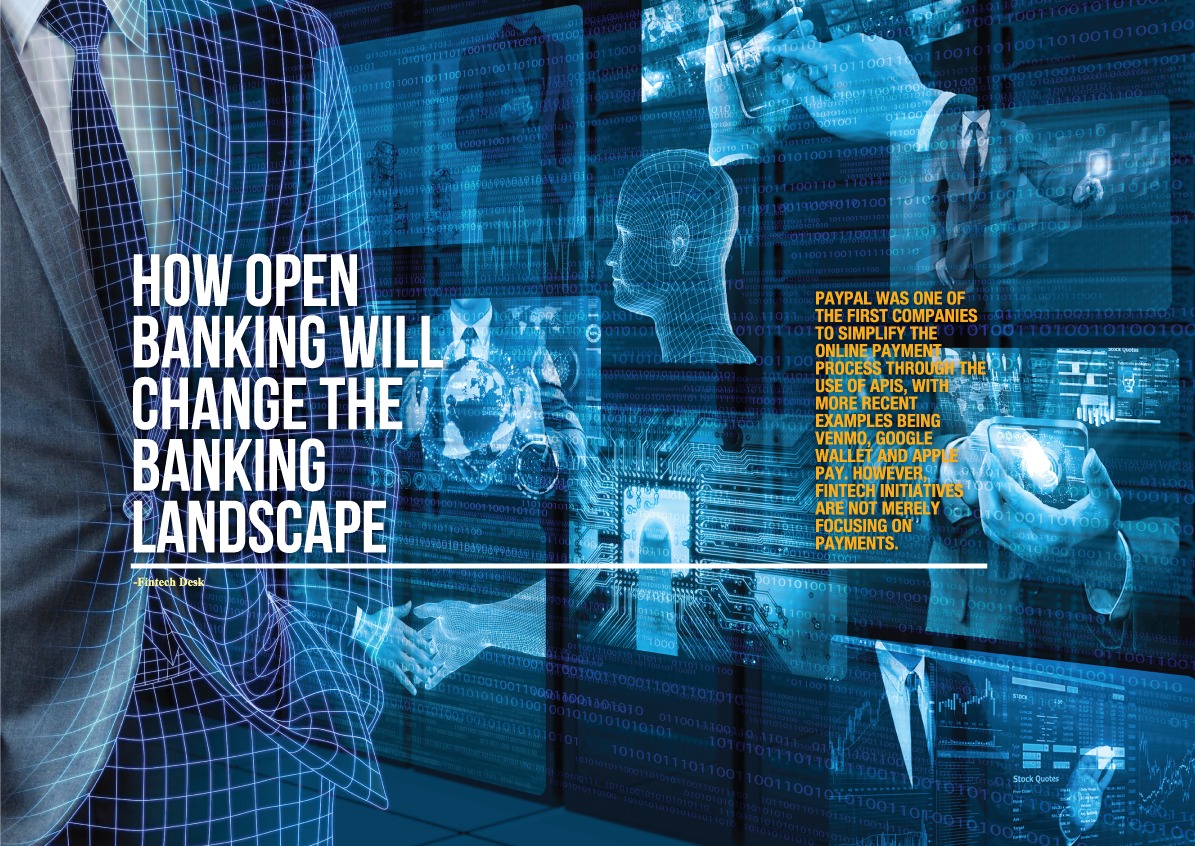 Technology has changed the way we interact with companies. Over the past decades, many industries have been disrupted by the likes of Uber, Facebook and Airbnb. The business model of banks, however, seems to have remained unaltered. The question is: will it stay that way?

On October 8, 2015, the European Parliament adopted the European Commission’s proposal for the revised Directive on Payment Services (PSD2) . The new rules enhanced consumer protection and aim to promote the development and use of innovative online and mobile payments. Although this may not sound like a big deal at first glance, PSD2 is in fact a first step towards what could be referred to as banking-as-a-platform. PSD2 includes provisions that enable account access by third parties via public application programming interfaces (APIs). The use of public APIs may accelerate the digital transformation of banks that is sparked by the emergence of financial technology (or FinTech) companies, and catapult them into an era of open banking.

APIs are standards that allow software components to communicate and exchange information. An API specifies the connection mechanism, the data and functionality that are made available and what rules other pieces of software need to follow to interact with this data and functionality. Although APIs are often used to link software components within an organization, the internet has brought rise to the popularity of external or public APIs. An organization can use a public API to allow third parties to access their data or services in a controlled environment. Using an API means that only desired aspects of software functionality are exposed, while the rest of the application remains protected. A Facebook like on a third party website and an embedded Youtube video are typical examples of the use of public APIs. 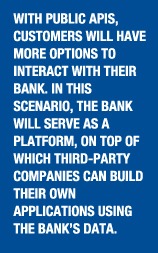 In addition to the examples mentioned above, companies such as Google, Apple and Facebook use public APIs to allow third parties to add functionality to their core offering, essentially becoming a platform for third party innovation. This is arguably the most interesting application of public APIs and one that offers many benefits to the original organization. Besides driving revenue, it also allows the organization to better serve the needs of their customers.

Banking as a platform

With the adoption of PSD2, banks will have to rethink their position in the financial services landscape. In the current situation, banks offer a range of end-to-end financial services through various channels (online, mobile and branches). With public APIs, customers will have more options to interact with their bank. In this scenario, the bank will serve as a platform, on top of which third-party companies can build their own applications using the bank’s data. HM Treasury published a study in December 2014 on the impact of API, where they noted that data sharing may challenge the behavior whereby bank account customers often, by default, buy and use other financial services such as loans, mortgages, savings, foreign exchange and even online access from their core account providers.’ In other words, the report suggests that the business model of retail banks, where current accounts are used as a ‘hook’ to attract customers for more profitable lending products, may become unsustainable.

In their book ‘Bye Bye Banks?’, James Haycock and Shane Richmond described a scenario in which retail banks essentially became ‘dumb data pipes’, with FinTechs using the data and services of these banks as a platform to engage with customers (and profiting from their traffic). Just as incumbents in media, commerce and various other industries suffered from tech firms such as Facebook, Alibaba and Airbnb undermining their respective business models, Haycock and Richmond expect FinTechs to displace and disintermediate traditional financial institutions. However, some firms take an alternative view: the concept of banking-as-a-platform in fact provides great opportunities for banks to expand their reach, if they are able to adopt and exploit these technological developments themselves.

Let’s first have a look at the ‘challengers’. In the current financial services landscape, public APIs – and FinTechs in general – are most commonly observed within the payments market, particularly around digital wallets and peer-to-peer payments. PayPal was one of the first companies to simplify the online payment process through the use of APIs, with more recent examples being Venmo, Google Wallet and Apple Pay. However, FinTech initiatives are not merely focusing on payments. In fact, new entrants are challenging various aspects of the bank’s business models. Some initiatives that are proving to be successful:

Lending and saving: Zopa (UK), smava (Germany), Prosper and Lending Club (both US) are popular examples of peer-to-peer lending to individuals. Lending Club is listed on the NYSE since December 2014 and has announced in April 2015 that it intends to move into car loans and mortgages. Digit and Acorn (both US) have proven to be successful in offering simple saving schemes, whereas Mint and LevelMoney are US-based personal finance managers (PFMs) that help consumers manage their money by collecting all their financial data into a single app.

Funding and investment: popular crowdfunding startups include Kickstarter in the US and Funding Circle in the UK. Nutmeg, Betterment(both UK) and Wealthfront (US) focus on investment services with low barriers to entry, whereas eToro (Cyprus), ZuluTrade (Greece), StockTwits(US), Robinhood (US) and BUX (Netherlands) offer brokerage services.

The key competitive advantage of these firms is that they target one specific banking service and are able to focus fully on customers’ experience within that service. In contrast, banks traditionally try to lock customers in an end-to-end vertical structure. That is because historically, the bank’s owned the product, process and customer engagement. However, in an open data banking landscape, this is no longer the case: banks will have to compete with FinTechs for each aspect of its services. Success is determined by whether or not the bank is able to adapt to this change.

Fortunately, many banks are already recognizing the opportunities that Banking-as-a-Platform may offer them. In Europe, BBVA was one of the first banks to develop public APIs for various parts of its business. To further enhance their tech capabilities, BBVA acquired US online banking startup Simple in February 2014, which serves as a ‘smart layer’ on top of existing banking networks and offers customers’ data rich analysis of their transactions. French bank Crédit Agricole launched its own app store in 2012, stating that “data, the customer creates in his relationship with the bank, or any partner, is his own property so he should have access to it, but he should have access to it in apps that are useful to him.” Turkish bank Garanti also opened up its APIs to partners that want to integrate with them.

In addition to developing public APIs, German Fidor Bank has gone one step further by starting an API developer community, including developer days to promote the programmability of their banking data. Like tech giants such as Facebook and Google, Fidor has recognized that the key to a successful platform is a widely accepted and engaging platform. Another German initiative that tries to promote uniform acceptance is the Open Bank Project. The Open Bank Project facilitates innovation within the banking industry by providing an ‘open source API for banks’ that developers and companies can use to build innovative applications and services, based on the concept of Banking-as-a-platform. These initiatives are gaining traction, as a 2015 report on the Hype Cycle for Open Banking APIs, Apps and App Stores by Gartner shows that banking APIs and banking app stores are on the rise.

Vision for the future

The banks mentioned above all recognize the importance of adapting to changing circumstances. A digital world requires a new, digital way of thinking about banking. What can banks do to adapt? The authors of ‘Bye Bye Banks?’ propose the strategy of a Beta Bank. The Beta Bank represents a separate, lean entity that is built for the future. It operates under the flag of the traditional

bank but has its own business and servicing model, without the traditional bank’s legacy software. Instead, it is based on new technological developments: a playground for tech initiatives, if you will. Chris Skinner, author of Digital Bank, poses an alternative strategy: banks should simply do away with the ‘old world thinking’ that banks are able to do everything. Instead, Skinner argues that banks should identify the area in which they truly excel (i.e. product, process or customer engaging), and focus on delivering the best possible proposal within that area.

It remains to be seen what the perfect strategy will be but it is clear that banks should keep a close eye on technological developments. Banks will have to take lessons from incumbents in other industries that were too slow to compete with technology-driven startups. In other words, banks might have to consider becoming a bit more like Apple and Google, to avoid Google or Apple becoming the new bank. The most successful bank of the future will be the bank with the most popular and widely accepted platform for lending, investing and payments. Rather than save and lend cash, the future bank will match financial incentives and facilitate direct financial transactions between customers. With the world’s largest taxi company owning no vehicles and the world’s most popular media owner creating no content, perhaps in the future, the world’s largest bank will not even hold deposits.