He has also served as the Honorary Consul General of Bangladesh to Canada in the province of Quebec.

Dr Rahim talked to Fintech recently. Here is an excerpt from the interview.

FINTECH: People always look for opportunities to settle abroad. Is it still the same?

Yes, but what has changed is that those opportunities are decreasing. A lot is changing, whether in politics, or it is religious change, economic changes — everything is changing. So, there is the trend toward wanting to settle abroad, but we now have considerably less immigration. Around 5 years ago, immigration to Canada was wide open. After the 2009 recession the immigration went down by one fifth. In the last 10 years, over 2.3 million people immigrated to Canada, among which 640 thousand students and skilled labourers and professionals amount to 1.8 million. Canada is now more into targeting young and qualified people including retaining international students studying there. So people over forty face a tough ask to become successful under any of the regular immigration programs.

F: There is this idea that some people make their money white through immigration. Can you talk about that?

I think we need to understand the basics of how migration generally works. ‘Migration’ is an umbrella term, under which you have ‘immigration’ and ‘emigration’. Being an immigration consultant, what we do is that we help people follow the official process. But in every country, there are measures in place for background checks. And every immigration policy requires money that you bring along is legally obtained. I don’t think this is a route for “whitening” black money. Moreover, immigration consultants or authorised representatives are totally out of the picture in money transactions that happen after someone gets the visa or permanent residence . That is out of our jurisdiction. 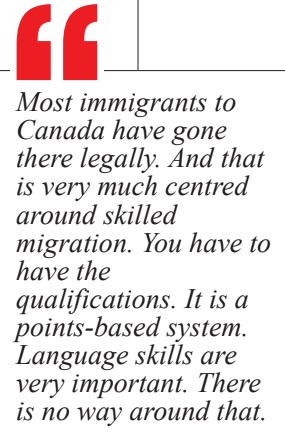 F: There is a lot of information out there and a lot of people depend on what they hear without verifying them. For example, you will often hear that there is a scheme that allows for depositing 1.5 lakh Canadian dollars and getting a citizenship.

This is a total misinformation. You are possibly talking about the investment category. Presently, to apply under it you will need a networth of Two Million dollars, which is equivalent to BDT 14 crore of legal assets. And the money or assets has to be legally obtained. You must demonstrate the legal accumulation of funds, have clearance and proper certifications from the tax authorities, NBR and so on. Once your case is approved, then you have to invest 1.2 million dollars in Canadian economy for 5 years and after five years you get the money back. But you may put down one time settlement amount of 350 thousand dollars also .This entire process takes about 3-4 years and if successful, you get a PR. Then you need to stay in Canada physically 3 years out of 5 years to become eligible to apply for citizenship. So you see there is a process. The conception that you can just buy a passport is fictitious. I think one thing should be loud and clear, that is, Canadian Passport or Citizenship is NOT for sale!

F: One of the things that happen as a result of immigration is the ‘brain drain’ for the expat’s country. What is your view on that?

Well, I would rather call it ‘brain circulation’ than brain drain. The world is a global village now and the whole world is moving along that way. If you look at Europe you see how citizenship has become more fluid compared to the past. I think brain drain is an old concept. One of the many ways migrants benefit is that they can acquire knowledge in all latest technologies and innovations in different fields which they can later exchange, implement and share with their home country and contribute immensely. Also, they can get a high quality education for their children almost for free in Canada.

F: How many skilled and unskilled Bangladeshi immigrants are in Canada as of this year?

The number is around give and take 125000. Canada is a little bit different from other countries in terms of what it means to be skilled and unskilled. Canada has a greater number of educated populations compared to Europe and America. Most immigrants to Canada have gone there legally. And that is very much centered on skilled migration. You have to have the qualifications. It is a points-based system. Language skills are very important. There is no way around that.

F: What happens to people that end up in Canada illegally?

I would like to clearly state that there is no way you can go to Canada other than the prescribed ways. And even if you ever ended up going there by any means, there is no way you can stay there for a longer period without a valid reason. Attempts for illegal migration happen because of lack of knowledge about immigration among Bangladeshi population. People don’t know how to go through the legally permitted routes. And they get scammed because of that. Many unscrupulous agents and ghost consultants are active in this field and they promote fake programs and prey on immigrant aspirants. So, the first thing you should be doing is that you should verify the legitimacy of the agency you are going to for helping you with the process. It’s not very hard to get information nowadays. As an educated person you should exercise due diligence. Blindly believing advertisements selling you lucrative opportunities will land you in a bad situation. Just keep in mind, If something is too good to be true, probably it is not true. Ads you see in newspapers promising you immigration to any country are likely to be fraudulent.