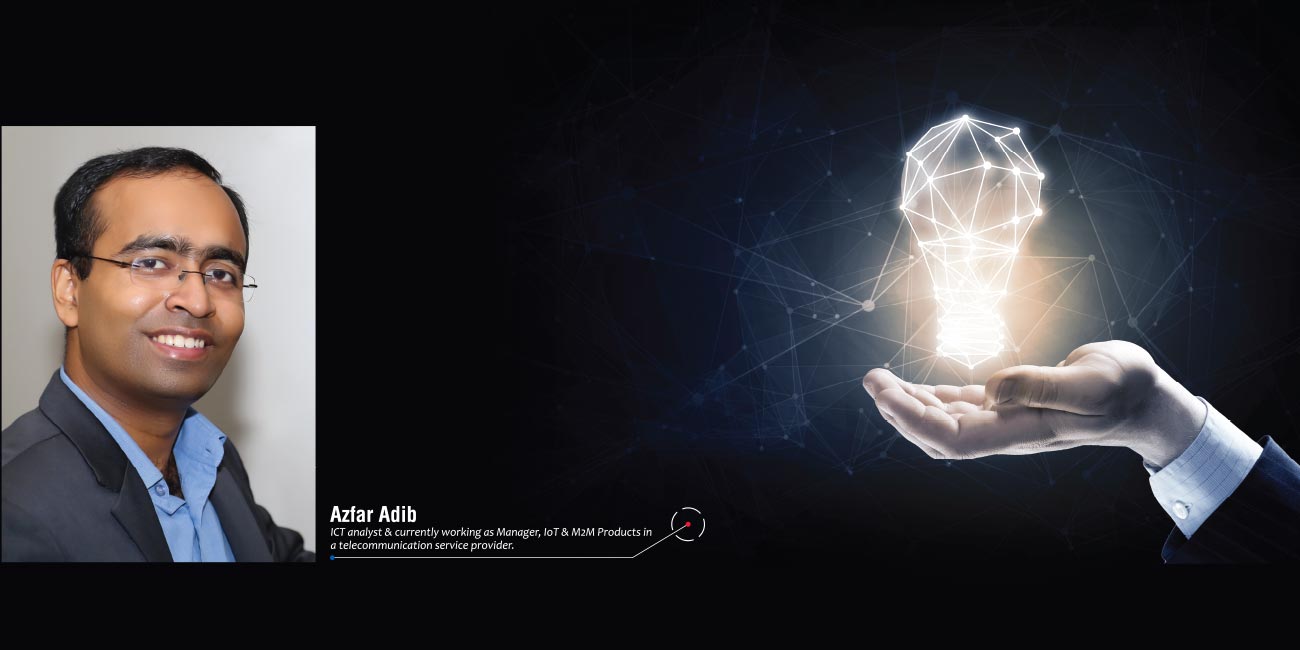 It is predicted that from the current world of connected people, we are quickly moving towards to a world of connected devices. as there can be more than 50 billion devices connected to the internet by 2020. This is being facilitated through Internet of Things (IoT), which basically means a network of hardware (physical devices) embedded with software (applications) and connectivity – which enables them to exchange, process and analyze data , thus facilitating various services.

History of Internet of Things (IoT) in Bangladesh can be traced back around a decade ago, when some IoT based commercial services like: vehicle tracking and smart electricity metering started in the country. Since then there have been some steady and somewhat silent growth in this arena, while in recent years it is receiving higher focus considering the extensive range of potentials here.

IoT topology consists of three basic building blocks. To understand the IoT the scenario of Bangladesh it is important to know what is the situation with respect to each of these three basic foundation.

Hardware: More specifically these are sensors, which measure and collect related information \ from the source. In the Bangladeshi market, majority of these hardware are imported while a small portion of locally assembled devices are also found.

Connectivity: Communication network for transmitting the data between hardware and software ends. In terms of widespread coverage, mobile Wireless network (2G, 3G, 4G) is the mostly used scheme here; along with fixed broadband solution facilitate by ISPs and some recent implementations of other technologies (like Zigbee).

Software: Software entails the applications for providing storage, processing, analytics, user interfacing of relevant data. With a highly capable software developer community in the country, this portion is mostly addressed locally. It is worth mentioning that a significant portion of data generated from IoT systems are hosted in external cloud (like: Amazon Web Services).

While IoT based applications in the country have so far remained concentrated around particular services, it’s potential remain enormous here across various domains (for example: agriculture, security and surveillance, smart home, smart city , industrial automation, health care). In recent times this market is expecting a major thrive considering its high demand for different government and private project, consumer appliances along with continuous evolution by relevant service providers in all domains. To retain and accelerate this growth, certain aspects needs to be emphasized. For example:

Policies: Formulating relevant government policies and regulatory guideline to foster IoT. The very first directive regarding IoT (draft version) has been published by Bangladesh Telecommunication Regulatory Commission (BTRC) in April 2018, which mostly covers guideline regarding IoT device importation. There are several other aspects which need comprehensive directives, such as security and privacy in IoT based services, number series enhancement for SIM based IoT services, considering current crunch of numbers of mobile telecom operators, tariff and duties regarding device and data charges.

Distribution channel: Developing country-wide distribution and after-sales support force for IoT services. Now-a-days a significant number of local entities are coming up with different IoT based consumer products which have good market all around the country. However, to make best utilization of this market, proper sales and service channel need to be built accordingly.

Having one of the fastest growing economies of the world with a population of over 170 million, Bangladesh possess big range of use cases for IoT, and it can be a highly suitable place to effectively demonstrate how this technology can improves the lives of people. This can be achieved through focused and combined efforts of government, industry, the academia and all concerned stakeholders.