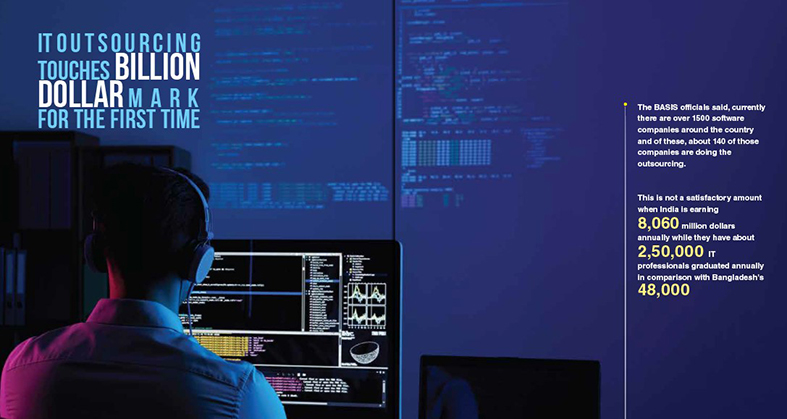 The earning from outsourcing Information Technology enabled services (ITES) jobs has touched the $1 billion mark in the last 12 months for the first time in the country’s history, sources in the Bangladesh Association for Software and Information Services (BASIS) said.

In last year, the earning was 800 million US dollar while the respective number was 700 million in the year before, BASIS president Syed Almas Kabir told Fintech referring the latest available data of the export promotion bureau (EPB).

Experts concerned however said that it could be multiplied by at least two billion dollars, with its growing ranks of the information technology professionals, with a little back-up from the public and private partnership, establishing a systematic IT outsourcing facilities and projects, available from the major buyers from the USA on the internet marketplace.

The BASIS officials said, currently there are over 1500 software companies around the country and of these, about 140 of those companies are doing the outsourcing.

This is not a satisfactory amount when India is earning 8,060 million dollars annually while they have about 2,50,000 IT professionals graduated annually in comparison with Bangladesh’s 48,000, experts said.

Talking with Fintech, Saimon Azim, a software entrepreneur and exporter said, IT outsourcing by the western companies has been a common practice in SME domain for many years since these are event-triggered services and the labour cost in the east, especially at south-east Asia is cheaper than the West. Break/fix, installations, web design and small scale new software implementation are common tasks and functions that SMEs have outsourced to IT service providers.

India, our neighboring country, meanwhile, is controlling the $9.6 billion market though Bangladesh, with its potential workforce, can seriously break this monopoly, only by taking some systematic measures which can create job opportunity for thousands of people and also help the country entering and controlling into a market worth of billion dollars, he said. 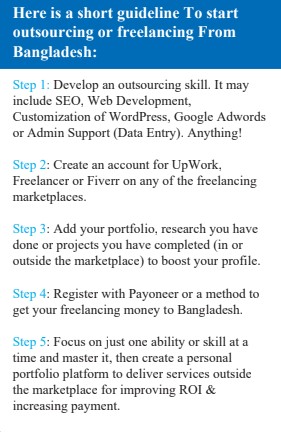 “You don’t need to go that far, just look at ‘Infosys’, a $6.150 billion company headquartered at Bangalore, India. They started with Rs 10,000 on July 2, 1981. Now the world has seen what they have done”, Simon Azim, who is the CEO of Thinkcrest, one of the few successful outsourcing company located in Baridhara area of the capital, said.

Simon mentioned that the recipe of “Infosys” success was “simple.” They have some seriously motivated entrepreneurs, a strong business plan, a skilled development team and some targets, set up on a periodic basis, which ‘Infosys’ had actually achieved to reach in this position.

Simon, a former employee of the world renowned “Deloitte and Touche” returned to his homeland and set up the Thinkcrest, four years ago with only three members in the development team. “Now I am making profit, paying bonuses to my 30-member team and most importantly, all in US dollars,” a proud Simon said.

But the picture is not that much rosy for the company “Web Archieve” as they don’t have a marketing analyst and a person with US connection like Simon.

Raqib Ahmed, the chief system analyst of the company informed Fintech that for the last two months, the company had only got three projects.

“The problem is in Elance, we can’t place the lowest bid, and if we can’t get the job as the requirements can’t be fulfilled”, Raqib said.

These virtual internet marketplaces like Elance work like invitation of bidding for tenders. Here the administrative body of the marketplace allows business to post a project online and assess providers bidding on the project by reviewing qualifications, ratings, portfolios and skilled based scores.

“When you place a bid on a particular project in this marketplace and the job-provider sees that you are from Bangladesh, you need to place the lowest bid, otherwise you don’t get the project”.

The Indian companies have developed a strategy. They, with the help of the Non-Resident Indians living in USA, have a US address and better credentials, place a medium price bid. So when the employer see both the bid, one from Bangladesh and the other from US (originally from  India), they go for the later, despite  higher prices, since they put more trust on them in terms of quality assurance”-said Raqib explaining the situation confronting the Bangladeshis competing against them. .

“This doesn’t mean that we can’t provide high quality work. It’s a question of attitude, which nobody can erase from their mind, while dealing with financial matters”, Raqib added.

The situation for the individual freelancers is even worse There are 500,000 active freelancers who are working regularly, out of 650,000 registered freelancers in the country.

When asked why, Julfiqar Ali Bhuiyah, one of the freelancers told Fintech, “We have to work hard on a project for two weeks. According to the rules of the marketplace, we get only one-third of the total money after submitting the initial framework, which is called alpha stage. But at gamma stage that is after submitting the project, a number of clients reject, describing  it ‘not up to the standard’ and do not pay us the rest two-third of the money”.

Freelancers like him became frustrated after several incidents like that. They can’t do anything as the rules of the game do not allow them and the clients never feel liable as the freelancers are not a licensed company. Moreover freelancers don’t have the financial assistance to place that much bid which the marketplace charge 25 cents per bid, Bhuiyah pointed out.

Not enough skilled IT professionals

“The problem is we can’t create enough opportunity for our young IT professionals. Moreover they are paid very poor money in the software companies for the first three or four years, which mostly force them to go for an MBA or management degree and switch them from the very professional field”, Dr. M. Kaykobad, a professor of Bangladesh University of Engineering Technology told Fintech.

Bdjobs, the largest job portal in our country currently has about 60,000 CV of IT graduates in their database alone. But there were opening for only 286 posts under 64 companies for this outsourcing purpose last month.

There are  around 70 CVs that are normally posted against a single opening through Bdjobs only, rest aside the mail or manual way, one of the Bdjobs official said.

“We have to take this to the next level, if we really want to create a true digital Bangladesh, rich and resourceful in IT sector. I strongly deny the allegation that our students don’t have the potential to design high class software. I can give you more than 100 names of my own students of BUET, who are currently working in Microsoft, Adobe, Oracle and other big companies”, Prof Kaykobad said.