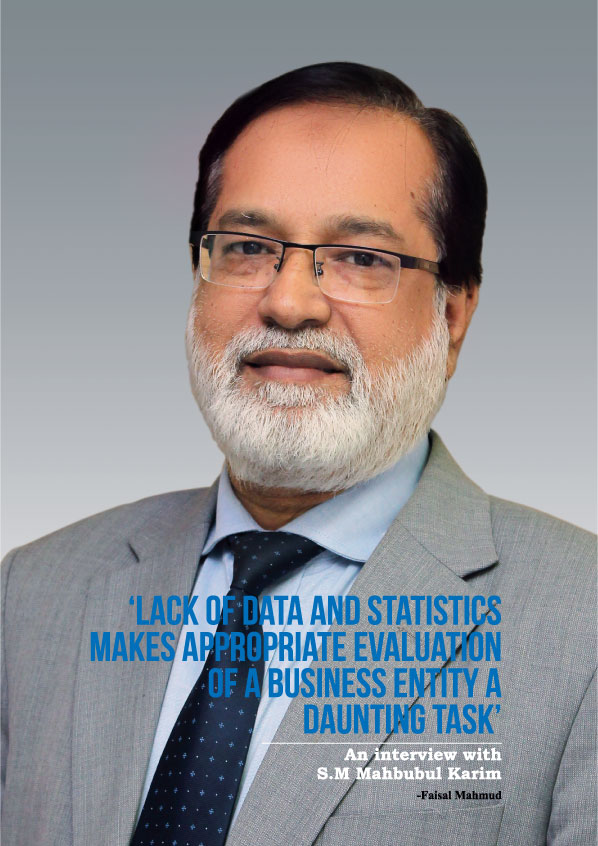 In a fiercely competitive insurance market of Bangladesh, S.M Mahbubul Karim, the Chief Executive Officer (CEO) of Nitol Insurance Company Limited is known to be relatively docile person. He speaks in a soft manner, handles his subordinates with utmost patience and treats his clients and guests with praiseworthy gestures.

Make no mistakes though, as a seasoned insurance man, he knows his numbers and in attaining those, he doesn’t cut any slack. Fintech recently had a conversation with SM Mahbubul Karim and during that half an hour session, Karim talked about his journey into the insurance sector of Bangladesh.

FINTECH: You have over 30 years of experience in the insurance sector of Bangladesh. Tell us something about your journey in shaping up this career.

SMM Karim: When I completed my master’s degree in Public Administration from Dhaka University in 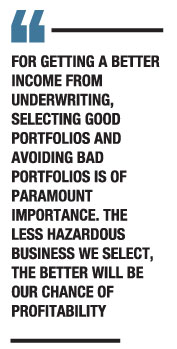 FINTECH: Nitol Insurance was an extended arm of Nitol Motors. When did it start diversifying its portfolio?

an insurance company would be more beneficial and cost effective for Nitol Motors than insuring the huge number of vehicles with other insurance companies. With that thought, the Nitol Insurance Company was formed.

At first, we established our first branch in Bijoynagar in Dhaka and the second one in Bogra. Bogra is a transport hub in North Bengal and that’s why we established a branch there. After gradual expansion, now we have a total of 18 branches across the country. Our premium income is near about Tk 55 crore. We are not penetrating the market very aggressively because there are some problems prevailing in the insurance market. The business costing is very high here. There are huge competitions in the sector. If we increase the costing of our business, then the profit margin will become very low. The overall profitability will be reduced. So we are moving ahead with caution and calculation.

FINTECH: In making an insurance company a profitable entity, what areas should be looked into? How the money is being made here?

SMM Karim: The profit in an insurance company comes in two ways-one is through business which we call as underwriting. It basically means income through the premium after the expenditure. The other income comes from the investments that an insurance company makes. The premiums that we collect, we invest it in different entities basing on the market on interest or profit return. We sometimes invest the money in the bank or in the share market. We make security investments or invest in government bond. It depends on the situation of the market. For example, the interest rates in the commercial banks are very low now. We used to get interest in double figure but now it has reduced down to single digit. So it might not be good time to put our investments in the banks now.

In our company, 50% income comes from underwriting whereas the rest 50% comes from investment. As I said, because of the situation in the market, the investment income has gradually been reduced down and that puts an impact on our profitability. So, now if we want to keep our profitability, there is no option in front of us but to increase our underwriting income. For getting a better income from underwriting, selecting good portfolios and avoiding bad portfolios is of paramount importance. The less hazardous business we select, the better will be our chance of profitability. There are lots of businesses in the market. For example, the business of captive power plant; it generates a lot of premium. But at the same time, the loss ratio is very high. So, we look at the portfolio and carefully select the business to get insured with us.

FINTECH: Which are the main sectors that Nitol Insurance is covering?

SMM Karim: Traditionally, ready-made garments (RMG) sector dominates the insurance landscape in Bangladesh. After that, we have textiles, pharmaceuticals and power generations and manufacturing industries.

Nitol Insurance Company is gradually expanding its portfolio in all those sectors. As I said earlier, we are moving forward very cautiously.

FINTECH: How about generating premium income from SME?

SMM Karim: The SME sector of the country hasn’t been developed properly yet. This is a sector with huge potential though. If you take a look the developed countries, you will see that a big part of their development has happened through SMEs. But in our country, it doesn’t have a systematic growth. So, without a systematic growth, neither the SMEs will be compelled to grow for insuring their business, nor the insurance company will feel confident in providing insurance support to the SME businesses.

The problem so far here is that we cannot make the SMEs to come voluntarily to us. When any small business goes to bank for a loan, then there the company is compelled to take insurance because without insurance, the bank will not give loan to that company. But that is different. If we could have done that, it would have been a big booster for the insurance companies of the country.

FINTECH: To have increased penetration in the market, are you thinking of any innovative plans?

SMM Karim: As of now, our insurance products are mostly  because without the policy and active support of the government, crop insurance will not be possible in a country like Bangladesh. 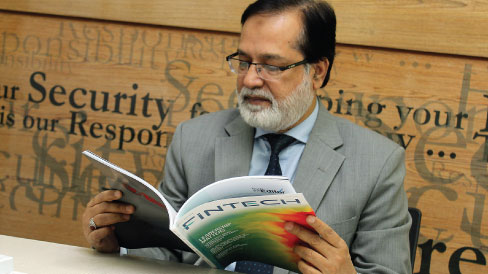 The neighboring India can be good example in front of us. The government there aid massively in popularizing crop insurance. They have also started cattle insurance under government subsidy and finance. In Bangladesh, this concept has also recently been picked up and some companies have started this on a small scale through government partnership. But I believe that we still have miles to go in this sector.

Our company is a mid-size company and we still have limitations in doing crop insurance through co-operative. We are thinking of concentrating on personal insurance like health insurance. Again in our neighboring India, this concept has picked up very well. I saw that increasing number of people is purchasing health insurance there. This needs changes in organizational setup as well. The hospitals and clinics of the country have to be ready for this. I saw in India that there are separate desks and services for the people under health insurances. Such arrangement also motivates people to purchase health insurance.

Health insurance is happening in a very small scale in Bangladesh. Some of the large local and multinational companies are not providing medical allowances with the salary rather they are purchasing health insurances for tat employee with that money. I think this is a smart practice.

FINTECH: Many insurance companies of the country have a common complain about the lack of data for the valuation of business entities. What is your take on that?

SMM Karim: For an insurance company, appropriate data and statistics of a business entity is the most important thing because basing on those, an insurance company takes decision. But in Bangladesh, one of the main problems prevailing in the whole business sector is that, we don’t have proper statistics about different business entities. Very few quality surveys or research works are conducted to create appropriate data chart on different issues. We don’t even have sectoral data and statistics which make appropriate evaluation of an entity a daunting task.

Through Bangladesh Insurance Forum, we are trying to conduct some research works and we are trying to unearth some proper data about the sector. The BIA publishes a yearbook in each year. In that yearbook, they usually publish company statistics but there is no sectoral data available in that book. We are trying to do that for our own sake.

FINTECH: A major problem that insurance companies in Bangladesh face when it comes to claim and settlement. What is your company’s performance on that regard?

SMM Karim: Our claim payment is very satisfactory. We don’t have a long pending claim and we are very prompt in claim. We are settling claims worth of Tk 12-13 crore on yearly basis. There are certain procedures about claims and when we issue a policy, there are some written conditions that come with it. The problem is many of the clients don’t read the conditions properly despite our repeated requests. So problems sometimes arise from that supposed ignorance of the client.

For example, in marine insurance, there are some categories of risks that we cover. Suppose the marine insurance Institute Cargo Clause-ICC (A) refers to insurance that cover a wide range of losses and to get that one has to pay the highest premium. Now suppose if an organization purchases ICC (D)-which covers some limited area thus has lower premium and claims on the categories that ICC (A) covers, and then it becomes a problem for us during the settlement.

I think rejecting a valid claim is ethically wrong. If one client gets insured with you, you have to make sure that s/he gets the proper settlement if a situation for claim arises. When I take insurance, I have to make sure that, I have proper reinsurance against that insurance. If an insurance company takes proper measure for reinsurance then I don’t think the company will have any genuine cause for not settling a valid claim of its clients.

The problem is many of the insurance company have lack of competence in re-insuring their insurances. If we insure a large project worth of Tk 100 crore, we will only have 1% retention here, 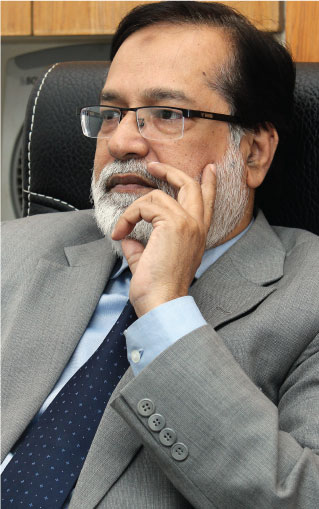 the rest 99% will come from reinsurance. So, re-insurance policy and initiatives of an insurance company is very important because insurance company without reinsurance will not survive no matter how big it is. This is because one large settlement against claim could bring the downfall of a company.

FINTECH: Is the regulatory body taking any proper step to curb malpractice in the insurance sector?

SMM Karim: The Insurance Development and Regulatory Authority (IDRA) is trying very to curb malpractice in the insurance sector. It once formed a taskforce to stop the unethical practice in the sector. I was a member of that taskforce. We conducted investigation at the field level and we were being able to unearth some process with which the malpractices in the sector were being conducted. We also were being able to identify some individuals and later actions were taken against those people.

The problem is malpractice in the insurance is not a single party problem, it’s a multi-party problem. Even the banks are somehow involved and to some extent responsible for malpractices at the field level.

FINTECH: The technological disruption is also hitting hard in the insurance sector. What is your company’s adoption in terms of technology?

SMM Karim: From the very beginning, our company has been doing all the things in digital manner. We make sure that each and every employee of our company has a computer to do all the works. All of our processes are being conducted through centralized software from the very beginning. Our software was developed in 2000 by a local software company named IBCX-Primax developed for me.

The IDRA is also trying to digitalize the sector. It is trying to have a central server like Bangladesh Bank. All of the day’s transaction reports of the insurance companies will be sent there like the way commercial banks send their day-closing report to Bangladesh Bank. This proposal is still in its infancy. It will require at least Tk 50 crore to do that. An expression of interest (EOI) has already been floated by the IDRA to hire consultant for the digitalization process. If it is being completed, then it will bring a large scale digitalization in the whole insurance sector.