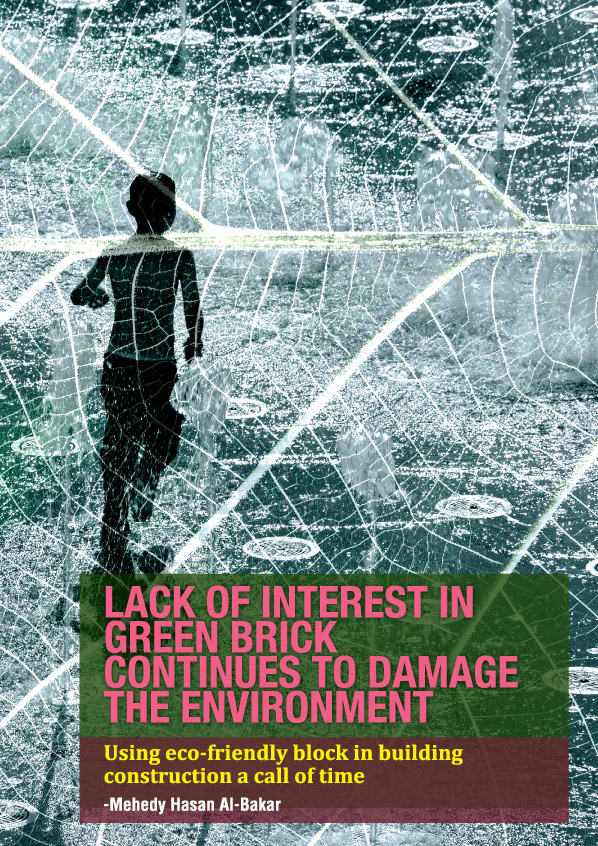 Urbanization in Bangladesh has been taking place rapidly along with the country’s economic development. High rising buildings are an inevitable output of the rapid urbanization. Bangladesh is yet to adopt using eco-friendly materials in building construction that has already been done by the developed countries. Till today, traditional bricks, which are burnet in kilns, are the main source of brick in building construction in the country.

According to research by House Building Research Institute (HBRI), at least 17.2 billion pieces of bricks are made in the country per year. Burning a billion bricks requires 240 million tons of coal. Apart from use of coal, deforestation is also taking place in the villages due to use of firewood in the brick kilns.

Emission of huge quantity of toxic elements from brick kilns is causing serious health hazards. The brick kilns emit 23 percent of the country’s total carbon dioxide. High concentration of carbon monoxides and oxides of sulphur (SOx) are also emitted from the brick fields, resulting in adverse impact on people, as well as on the environment.

Use of top surface, the most fertile portion of soil, in making bricks is also a cause of major concern. Collecting clay in this way is posing threat over productivity of agricultural land and food security at large.

Developed countries and countries like China, Vietnam and Indonesia have started to use a combination of sand, cement and stone-made blocks instead of the traditional brick to get rid of the problem. Using such blocks has been reducing carbon emission along with saving agricultural land. HBRI has introduced this kind of eco-friendly block and concrete caloled Compressed Stabilized Earth.

“The blocks are made of river sand mixed with cement and small pieces of stones,” said Akhter Hossain Sarkar, HBRI senior research officer.

“There is no requirement to burn such blocks. That’s why, the block is environment friendly,” he said.

Sound and heat protection capacity of the blocks are higher than the traditional bricks. Light in weight, saline and humidity protective nature of the block ensures longevity, Sarkar said.

Sarkar also said that there is a lack of government initiative in promoting the block, as traditional bricks are continued to be used in major construction works even in government’s development activates.

HBRI, however, brought up the subject at a meeting on annual development planning in present of government’s top brass including a number of ministers. Besides, the organisation also organized a number of seminars where teachers and students of engineering universities, architectural colleges and civil engineering institutes were present, the HBRI senior research officer informed.

Sarker also said that meetings with three associations of traditional brick manufacturers helped HBRI to convince them about the importance of the block.

Concord general managing Shamir Uddin Ahmed said, “Concord use the Hollow Block in all the buildings which we build. So far, such blocks were used in 500 buildings by Concord.”

A factory named Conpack has been setup in Ashulia. Initially, cost for blocks was comparatively higher than bricks, but the situation has changed now, Ahmed said.

Cost for a piece of block is Tk35, Tk10- Tk15 lower than traditional bricks. Besides, it also saves other ingredients like cement and sand which are required for wall plastering. Traditional bricks, however, are still being used in most of the building construction work mainly due to lack of awareness and knowledge.

The vice-president of Real Estate and Housing Association of Bangladesh Liakat Ali Bhuiyan said, “apart from blocks, there are many other eco-friendly and cheap technologies. We are lagging behind in adopting the technologies.” REHAB has been trying to promote the technologies in its fairs and seminars.

He, however, said that using blocks should not be made mandatory in building construction, as it may create a deadlock in the sector.

On the other hand, the president of Bangladesh Brick Manufacturer Owners Association Mizanur Rahman Babul said they are aware of the lack of interest in using the block.

“Low demand for the block is a big problem, as majority of the companiues use bricks for building construction. Block is yet to be used in government’s development projects, which is what deterring brick manufacturers from starting block production. Blocks could also be made by using fly ash besides making it by using sand and cement,” he said.

Babul also informed that they have recently visited such a project in India and they were given a machine for making blocks for free of cost. An application was sent to the power ministry through environment ministry, praying for permission to acquire fly ash for test production.

“We are yet to get any reply from the power ministry even after four months of the application. We could not start production just because of fly ash crisis,” Babul said.

He, however, admitted that there is no alternative to shifting from traditional brick kilns to block production factories in order to prevent environmental disaster. ■