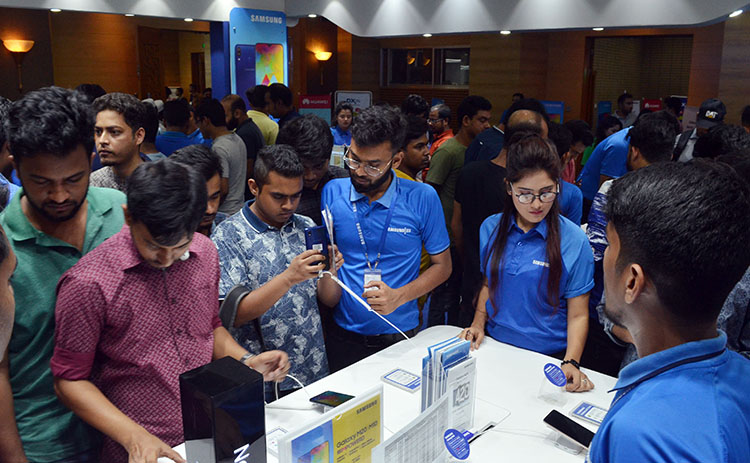 Despite growing domestic demands, assembled and manufactured smartphones are expected to become cheaper this year, thanks to increasing investments by local and foreign companies to set up plants to manufacture smartphone in the country and a duty structure designed by the government to discourage imports.

Approximately, 75 lakh units of smartphones were sold in 2018, 7 per cent of them being local products, according to the Bangladesh Mobile Phone Importers Association (BMPIA).

Imported smartphones will be much costlier, as the government has levied a supplementary duty ranging from 10 per cent to 25 per cent. Local assemblers termed it a prudent decision that would help their industry to grow, said business insiders.

To avail the tax benefit promptly, five local and international brands have already started assembling mobile devices, to cater to about 30 per cent of the country’s annual demand for 3.5 crore handsets. Of the demand, smartphones account for about one core pieces, while the total sale amount would be around Tk 10,000 crore.

“At the end of this year, we, the local assemblers, will be able to cater to about 50 per cent of the total demand and, by 2020, around 95 per cent,” said Ruhul Alam Al-Mahbub Manik, president of the Bangladesh Mobile Phone Importers Association (BMPIA).

Syed Almas Kabir, president of the Bangladesh Association of Software and Information Services (BASIS), said that, globally, the smartphone prices were falling and the trend influenced the Bangladeshi market as well.

Smartphone prices will become more affordable for Bangladeshi customers, as large brands such as Walton, Samsung and Symphony have started producing handsets locally. From this year, three new brands would start their operations fully, said Kabir.

Talking about smartphone penetration, Kabir said that the broad band internet would soon offer connectivity up to the union level in rural areas, thus aiding smartphone penetration in the rural market. The use of smartphone would become meaningful when people would be able to download heavy-duty contents conveniently from the internet, he added.

Talking about other advantages, he said that people would be able to get e-commerce services, entire citizens’ services such as getting passports, trade-license and others once smartphone usage became more accessible in rural areas.

Talking about handsets that are entering illegally, he said that the Bangladesh Telecommunication Regulatory Commission (BTRC) recently prepared the International Mobile Equipment Identity (IMEI) database to detect handsets that are being imported illegally.

The Techshohor Smartphone and Tab Expo (STE) 2019 was recently held at the Bangabandhu International Conference Centre (BICC) in the capital from June 4-6, 2019.

STE, organized by Expo Maker, has been the largest smartphone and tablet showcasing event in Bangladesh, which took place for the eleventh time this year.

The smartphone and tab expo started in 2012. At that time, the smartphone penetration in Bangladesh was 1 per cent. It rose to 26 per cent in 2016, said organizers.

It was a good sign for the local producers, said exhibitors who participated at the expo.

The three-day expo successfully drew huge numbers of gadget enthusiasts as different smartphone and tablet PC brands made big offers at the exhibition.

Nokia, a Finnish multinational telecommunications, information technology, and consumer electronics company, participated and brought loads of offer in the smartphone and tab expo.

Habib, a salesperson from the stall, told The Independent, “Nokia is offering an attractive handset model 8.1. It is available in the fair with Equated Monthly Installment (EMI) facilities.

“Nokia is offering up to 20 per cent discounts along with a winter jacket for their products. Each and every latest model is available at the expo as buyers purchase their preferred one from the expo,” said salesman of Nokia.

‘WE’, another smartphone brand, was offering up to 30 per cent discounts for their 4G smartphone model ‘L9’ along with two other gifts. “We are providing-buy one get one free offer for only 3 hours in the last day of this expo,” Muntasir, branch head of the stall, had said at the time of the fair.

Eagle Song, marketing director of consumer business, Huawei, had said, “Huawei not only focusing on smartphones but also accessory items such as power banks, earphones. We want to build up the entire ecosystem in Bangladesh.”

Moreover, there were special offers on Huawei Power Bank and Color Band A2 and B2 exclusively at the expo, Song had said.

Popular smartphone Huawei Mate 20 Pro was available for Tk 89,990 with exclusive gifts throughout the fair. Also, customers got Huawei Matebook X at a discounted price of Tk 110,000, he added.

Sakib Arafat, director of Smart Technologies, said, “We came to this expo to build awareness about our brands among prospective consumers.”

Vivo, a Chinese technology company, also offered discounts and backpacks with their products, said a sales representative of the brand.

Dtel was present with their accessories including power bank in the expo.

Shoaib Mahmud, branch manager of Dtel, said, “We have a reputation for bringing various power banks to the market. We also have a buy-one-get-one-free offer in the expo. Not only this, there is a discount of up to 30 per cent on all the products of Dtel.

Xiaomi offered 36 per cent discount on all products, he had said.

On the other hand, up to 40 per cent discounts had been offered by Samsung on their products at the expo. Noyon Hossain, salesman of Samsung, said all the latest models were available at the expo.”

Samsung had offered 9 per cent discount only for students at that fair.

Samsung arranged a gaming zone at their stall as well, the salesperson had informed.

iPhone had several new products such as 10s, 10r at the fair, said a sales person of the iPhone stall at the fair.

Muhammad Khan, strategic planner, expo maker, said, “There were price cuts for products and gift items from the participant companies at the expo. We had already commenced a contest on facebook. The winners of the competition got attractive gifts at the event.”

Huawei, Samsung and Tecno were platinum sponsors of the fair. While Vivo and WE were gold sponsors. GoldenField and Motorola were silver sponsors and the title sponsor was Techshohor.com, Bangladeshi news portal. Overseas education consulting firm EduMaker was the partner of the event.

Shakib Arafat, director of Mobile Device Division of Smart Technologies, said that Motorola had announced discounts on selected models of smartphone at expo The models were `Moto E4’, `Moto E5’, `Moto E5 Plus’, `Motorola One’ and `Motorola G7 power’.

“Last year, Motorola participated in the smartphone and tab expo for the first time. From there, we had got massive response from our customers,” he added.

Monjurul Islam, a buyer who had come from Dhanmondi, said “I knew that there would be wide range of discounts offered by the sellers; so I bought a Samsung mobile phone set at 25 per cent discount.”

Imran Ahmed from Mirpur had said, “I got to know from my colleagues that there are special discounts in the fair and that’s why I came here to get those offers.”

The fair was open for all from 10 am to 8 pm. There was an entry fee of Tk 20 only. Students entered free by showing their student ID cards at the fair.

This report has been written by Sharif Ahmed, guest feature writer of Fintech