You are here
Home > Entertainment > THE COMPANY MEN 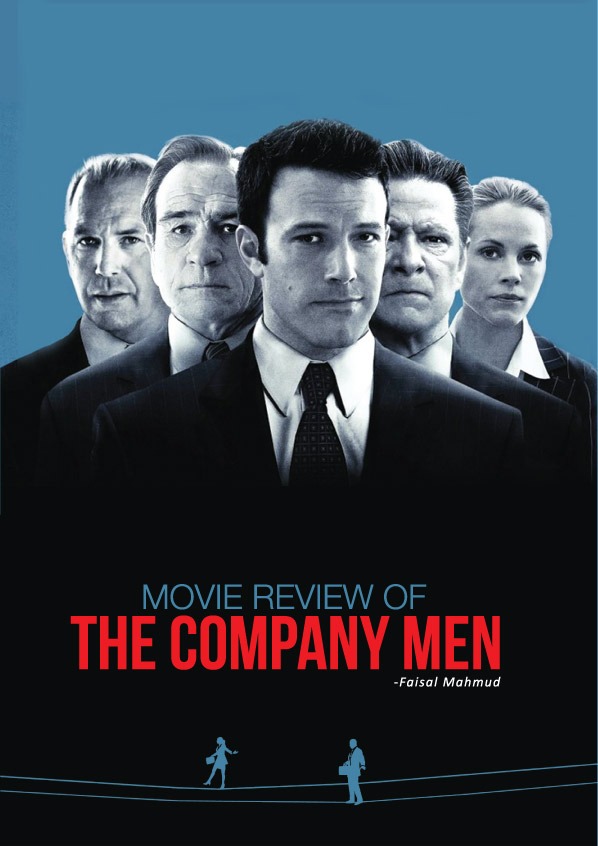 If you think unemployment or to be precise-a sudden joblessnessis bad, you haven’t seen The Company Men yet. Director John Wells ‘s debut film shows the darkest side of capitalism and portrays what recession and joblessness could do to some decent white collar fellows in USA-the country epitomizes the capitalist economy.

No, the movie doesn’t depict any gruesome or grotesque consequences-like after losing job, the person goes to a supermall and start shooting randomly or the person delves into brutal alcoholism and thus unleashes the poltergeist at home.

It rather takes you to a slow and painful ride of realization, and topsy-turvies you in between hope and hopelessness because the journey is all true and real.

The stellar cast makes the tough job of the director a relatively easier one as with people like Tommy Lee Jones, Ben Affleck and Chris Cooper-three Oscar winners, Director Wells could indulge himself in portraying the from up in the air

This film is often stunned, grayscale, and looks at the world through the angry, mystified eyes of the downsized. Thus it’s a study as much as a drama about the toll that unemployment takes on men – their egos, their libidos, their confidence that they’ll ever again be able to manufacture any kind of social status for themselves.

Effectively, the film’s story is a history of the effects of deindustrialization on white collar people. Chief among the fallen is Bobby Walker (Ben Affleck), a self-confident, rather cocky sales director at a Boston-based conglomerate called GTX. He earns 160 grand a year, and has all the good things that come with that kind of money: a suburban mansion, a Porsche, golf-club membership, and an attractive wife, Maggie (Rosemarie DeWitt).

A different kind of film would have us secretly cheering his dismissal. It would savage his typical American middle-class lifestyle. Wells, however, chooses to portray Walker as a striver, an ambitious guy who’s worked his way up from regional sales. His wife, coming from a less secure background, is a little better equipped to deal with the precarious future that faces them: working-class men and women know full well the fickleness of capitalism.

Walker’s not the only one at GTX who gets hurt. Also ousted is Phil Woodward (Chris Cooper), who over the course of three decades had worked his way up from the factory floor to executive status. His age makes him vulnerable: it signals memory, wisdom – and higher salaries. Obviously, he must go.

And then there’s Gene McClary (Tommy Lee Jones). He was a founding partner at the company. He loves making profits, but he also thinks that nurturing and retaining capable, qualified employees is a better strategy for long-term success than boosting shareholder dividends or trying to placate the frenzied speculators and confidence men of the money markets. Eventually, even he falls out with the CEO, terse-jawed ideologue Jim Salinger (Craig T Nelson) and has to leave.

It is through these three characters that we see the ripple effects from these layoffs, Wells taking the viewer into the homes and haunts of these men and their families. A sombre mood is felt throughout the majority of the film, Wells effectively comparing the grief of job termination to a permanent state of mourning.

Albeit a simpler storyline, the acting, directing and the cinematography make us to empathize with the humiliations of Bobby, Jack and Gene as they wage battles against those who see them as over-qualified, too old, or too greedy.

The movie also shows how unemployment threatens the stability of long marriages and rocks the relationships with children who feel the financial pressure and sense the anxiety of their parents. We learn of the ways in which grandparents have been called to the rescue of their children and grandchildren.

We realize that once measured success and achievement no longer works. And we see how those without work must reframe their lives and revise their priorities. It makes us to realize that it’s never too late to re-examine one’s priorities, and that’s the message that cuts through the grim sobriety of The Company Men.