This is a movie for those who want to see the human element when an investment bank realizes their models are wrong and that they are sitting on a large amount of assets worth less than they are currently marked at.

The movie is as intriguing and button-holing as a first-rate thriller and starts with an unnamed wall-street company’s latest round of brutal firings. One of the victims, veteran risk analyst Eric Dale (Stanley Tucci), hands over a file, on which he’s working, to a new employee Peter Sullivan (Zachary Quinto), a 29-year-old former rocket scientist now doing much the same job for a rather larger salary at the bank.

What Sullivan finds in the file is a forecast of the company’s future that makes a stick of dynamite look like a two-penny firecracker. The company has been buying and passing on worthless packages of mortgages, and it is on the brink of the biggest bank collapse of all time. As night falls, word passes up through the hierarchy from Sullivan to his slick British superior Will Emerson (Paul Bettany) and on to the head of sales Sam Rogers (Kevin Spacey), a basically decent middle-aged man whose main current problem is that his much-loved dog is dying of cancer.

Rogers rushes back to the office to consult his boss, the cool ruthless 43-year-old Jared Cohen (Simon Baker). Not surprisingly, they call in the almost God-like CEO, John Tuld (Jeremy Irons), who arrives by helicopter at midnight. His name is not entirely dissimilar to that of Richard Fuld, the infamous CEO of Lehman Brothers, one of the chief targets of Ferguson’s Inside Job.

At this point the grey areas get darker, the ironic euphemisms become coated with free-floating obscenities, scapegoats find themselves staked out, the rich protect their backs and get richer, and the public gets screwed.

What’s really fascinating to watch here are the interests and motivations of the individuals, because as much as this is a character piece; it’s also an essay on the pitfalls of short term motivation.

People who know too much are paid a million dollars to sit quietly in a room for a day and not talk. Traders are offered a bonus of $1.4M to meet a personal quota to sell assets they know are junk,

with an additional $1.3M per person if the whole floor hits quota. An executive loses 60% of his team, and cries because his dog is dying, yet never thinks to call his son (also implied to be in finance) to share the news of the pending crash.

Execs view what they’re doing as the inevitable ebb and flow of the tide, waxing about the constant distribution of wealthy and poor, how the numbers will never change, and
how the fallout is ultimately yet another opportunity to buy low soon and sell high later.

And that’s just it. Separated from the world (barely a single character unrelated to the firm has any screen time or speaking role), focused on their personal short term gains (one broker obsesses over the annual salaries of his superiors), and trapped in a situation where everyone is convinced that they “need the money”, selfish people act in their
own self-interest.

Margin Call plays like a documentary. The world is ruined, but the folks behind it take care of each other, even when they’re offering up a sacrificial lamb. It’s never personal, it’s just business, and despite the turmoil you can imagine that the same people will be in the 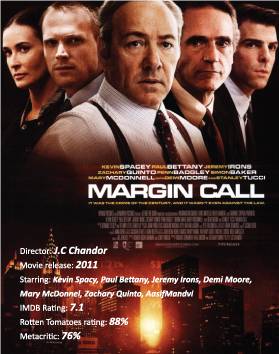 same room making the same calls a decade from now, leading us down the same path and shrugging it off as just the way things are.

The director JC Chandor makes excellent use of pacing and suspense and despite what appears to be a complex storyline set in the world of international finance, is able to make sure that any layman can understand what is going on and what the consequences will be.

There’s an ongoing joke within the movie that as the problem gets passed to the higher ups, the less they seem to understand what is going on and consequently, asks that their subordinates explain it to them as if they would explain it to a child or a dog.

For its overall tone and its cool interactions between well-suited business people, and for a hint at what goes on at the big brokerages in crisis, “Margin Call” is smart and well executed. It trades drama and suspense for more tantalizing interpersonal insight to that world. It is highly recommended for a person with a briefcase.