Getting legal advices upon facing cyber bullying or cyber fraud is something that doesn’t fly free in a busy metropolis like Dhaka. If you call this number – 01766678888, you might be surprised, as advices on such things really fly free there.

With rampant crime in the cyberspace and inability of the police in dealing with such cases have increased, the need for having a cyber helpline becomes more imposing than ever. Insight Bangladesh Foundation, a local organization has come forward to serve that need of time.

They have been providing the service for the last two and half years. For the first one year, ICT Division of

the government has provided logistic and other supports to popularize the service across the country. Since the second year, they have been doing it on their own.

How It Was Started?

Insight Bangladesh Foundation has a number of lawyers at their disposal who want to fight cases for humanitarian reasons. They specifically wanted to focus on voluntarily providing legal services for the victims of cyber crime .

“We wanted to do that because no one else was doing it,” said Kashif Ali Khan, Executive Director of Insight Bangladesh Foundation.

He said that Bangladesh has slowly and steadily entered into the digital era. “With digital advancement, comes the baggage of problems that are
needed to be taken care of. Unfortunately, there is a lack of awareness in many levels of the society including the policymakers about the whole issue of cyber crime.”

To tackle that lack of awareness and to provide a strong footing to fight against cyber crime, Insight Bangladesh Foundation had started this helpline
project three years ago in March 2013.

“After that we have received funding and technical support from the ICT Division of the government for one year under a program. The program ended in June last year. Since then we have been conducting the helpline on our own,” said Kashif.

Kashif, an IT professional said that the helpline project was mainly started to raise awareness against cyber crimes. “After the enactment of the ICT act, we wanted to provide legal support as well.”

He said that most of the people don’t know what to do when they face problems like derogatory comment in their social media account, or hacking
of ID or getting threat in the digital media. We established the helpline to provide advice about what to do in those situations.”

He said that they used to run the helpline for 24/7. “From September, they have shifted towards regular office hour from 9:00 am -6:00 pm. This is
because, we have identified that very few genuine complains calls are actually being made during the night time. Also most of the helpdesk counsellors are female, so it is a problem for them to work during the night.”

He said that they are running the helpline service and legal counselling on cyber issue voluntarily. “Our foundation has other business like trainings
on different sectors of ICT which generates revenue and with that we are running this service.”

Insight Bangladesh Foundation is registered under joint stock companies and firm. “We have applied to get enlisted as an NGO. It is under process. If we can be an NGO, then we can apply for funding s to the donor agencies to run our services.”

How The Service Is Being Provided?

Talking with Fintech, Advocate Nazneen Nahar, who works for Insight Bangladesh Foundation, said that every day they receive around 300 complains.

All the persons who receive phone call in the help desk are lawyers and have sufficient knowledge about the ICT act.

After that we have received funding and technical support from the ICT Division of the governmen t for one year under a program. The program ended in June last year. Since then we have been conducting the helpline on our own 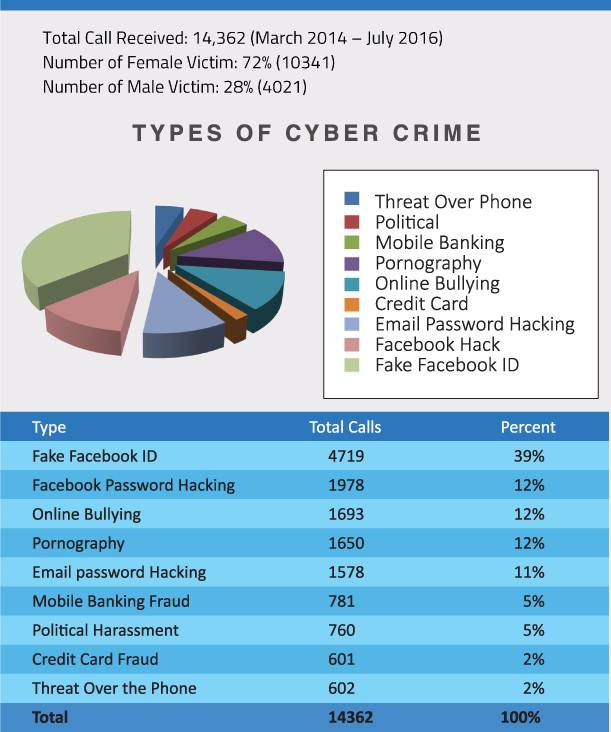 the complainers. Aside from that we have a lawyer panel comprising of 10 lawyers who can be hired and engaged in necessary legal battles in necessary cases,” said Nazneen Nahar.

“We mainly provide legal advices against the crimes which fall under the ICT act.”

Giving example, she said suppose a person calls and says that he/she has been receiving improper and derogatory comments on Facebook and asks what she would do.

“Under those circumstances, we give advice to immediately file a general diary in the nearest Thana against that person. Then we verify what sorts of comments have been posted on the complainer’s Facebook wall. If the level of comments demands a legal action, then we suggest that.”

She said that under ICT Act, police can arrest any offender without a warrant if he/she is found to be guilty.

“The punitive measures in the act are tough but it is necessary. In every second, 12 new Facebook IDs are created in Bangladesh. A lot of these accounts are fakes. With those fake accounts, many have started to commit crimes; promote militancy and other unsocial activities. Without strong measures, this cannot be stopped,” she said

“Cyber Crime is real and it is happening. If we don’t take measures, it will only increase”, she added.