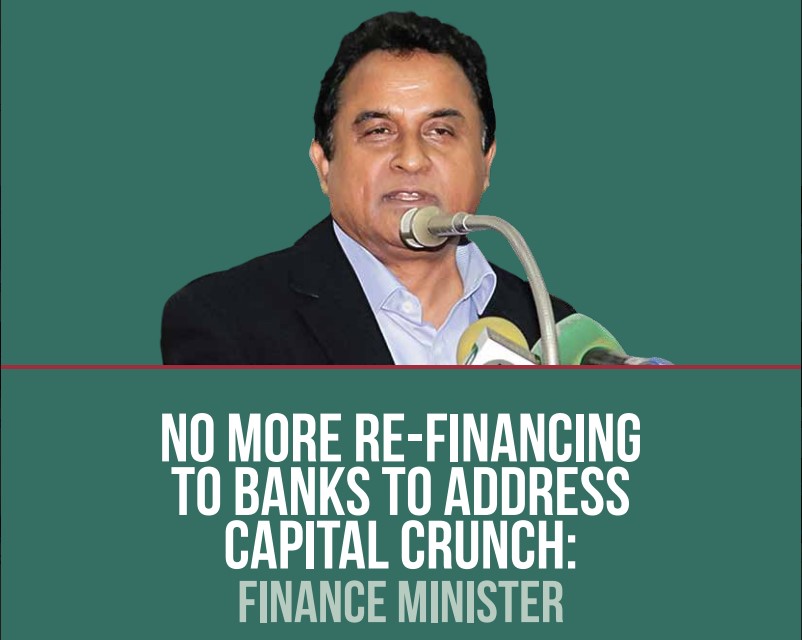 Finance Minister AHM Mustafa Kamal on August 25 said that the government would not re-finance anymore to the state owned commercial banks to address their capital crunch.

“There will be no more refinancing to the banks and that’s gone. This is now the story of the past …….these banks (state owned commercial banks) will have to earn their money and pay taxes to the government. This is the final decision,” he said

The Finance Minister said these four banks have been given some time to submit their work plan before him and they would sit again on next Sunday to further discuss on the submitted work plans.

Mentioning that the new top managements of these four banks are clearly very much skilled and if they could run their banks with their acquired knowledge and experiences considering the local and global context, then the country could expect much better in the coming years.

He said that the role and performance of these four banks is also important as these comprise around 25 per cent of the country’s banking sector.

Ruling out the media report that there is liquidity crisis in the country, Kamal said as of today, there is access liquidity of around Tk 92,000 crore and it could be used and further invested.

He also trashed media reports that the country’s export earnings would decline in the coming years saying that these are false reports.

Turning to the issue of Non Performing Loans (NPLs), the Finance Minister said the government is yet to make effective the ‘exit plan’ for addressing the NPLs since the matter is being stayed at the High Court.

“We hope the matter will soon be resolved and then you will get a clear picture of the banking sector and the exact amount of the NPL,” he added.

Kamal said if the ‘exit plan’ is properly executed, the NPL would reduce to a huge extent while the scenario of the country’s trade and commerce would be changed a lot.

He said once the writ filed with High Court regarding NPL is settled, a new circular would be issued giving fresh timeframe to the defaulters to pay off their loans utilizing the exit plan.

Answering to a question, Kamal said he had suggested these banks to pay attention so that the NPL is not increased further, these banks would have to continue efforts to make 15 percent profit per year, to utilize their resources properly and keeping due security before providing loans.

Referring to the recent growth projection of the International Monetary Fund (IMF), Kamal said the IMF has acknowledged the government’s growth estimation of last year and also projected a healthy growth projection in the current fiscal year.

“We believe if we can maintain this growth momentum, then the growth would not reach below 8 percent in the coming years,” he added.

Kamal said the country would start getting the benefits of large infrastructural investments in the coming years.

He also asserted that there is no apprehension over the country’s economy.