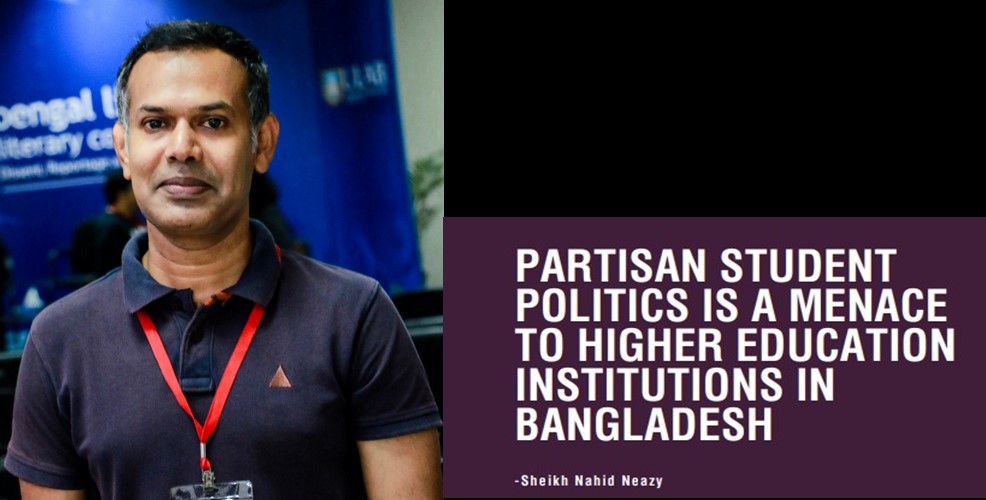 The brutal killing of Abrar Fahad, a student of Bangladesh University of Engineering and Technology (BUET), has once again brought the debate over banning student politics at educational institutions to the fore. The way Abrar was beaten to death by the so-called student leaders (some 19 student activists allegedly involved in the killing) of Bangladesh Chattra League (BCL) on BUET campus not only shocked us but also numbed our senses. The whole nation is still fuming at the gruesome violence committed by the “demons” masquerading as meritorious students. Abrar was mercilessly tortured on Sunday night (6 October 2019) in the dormitory (Sher-e-Bangla Hall) of the country’s most prestigious engineering university, and later his body was left in the landing of the stairs. Eventually he was found dead in the wee hours of Monday (7 October). This incident sparked condemnation, agitation and demonstration across the country. Shame on the partisan student politics! Shame on the diabolic practice of politics in the name of democracy! Shame on the university authorities who failed to ensure safety and welfare of the students on campus!

That a university student, a conscious citizen, posted an opinion in his Facebook timeline which brought an end to his life just stunned the nation. We were speechless and grief-stricken like his parents and relatives. Abrar could not anticipate a bit that he would have to face such brutality because of a mere Facebook post criticizing the recently signed deals (MoUs) between India and Bangladesh during the PM’s latest official visit to India. If the university students aren’t allowed to think critically, question arguably, discuss and debate freely any important issue (both national and international), who can do in the society? University dormitories are supposed to be the safest places for the students because they are all mature and conscious citizens studying in order to make a better future and to make a better country as well. But now we hear that some rooms in almost every residential hall of the public universities have turned into “torture cells” where opinions against the government’s policies are stifled, and dissenting voices are crushed. How dangerous this politics is! How demonic their political culture is! This is, no doubt, very intimidating and alarming for the generations to come.

There is no denying the fact that the glorious history of student politics dates back to the pre-independence era when the mobilization of students was a significant part of our liberation war. Students played an important role in the most crucial times of national interests – such as language movement in 1952, education movement in 1962, mass movement in 1969, liberation war in 1971 and movement for democracy in 1990 – where they had been in the vanguard of resisting the oppression/misrule of the then autocratic regimes and building the nation. But unfortunately, since 1991, student politics took a new turn mostly exposed to muscle power (violence) and money (extortion). Now it is just an extension of national politics that has been criminalized and rotten to the full. The current practice of student politics at universities has nothing to do with the general students’ rights and benefits. Dominated by the external forces and empowered by the national political parties, student wings are seen chanting slogans for the parties and their top leaders. They hardly speak for their own problems — scarcity of seats in halls, poor quality of food served in dining rooms, unhygienic bathrooms, poor living conditions in residential halls, political harassment/torture in dorms and irregularities of academic activities and etc. — they face on campuses.

Since the restoration of so-called democracy (in 1991), the State power has been confined to two major political parties, Bangladesh Nationalist Party (BNP) led by Begum Khaleda Zia and Awami League (AL) led by Sheikh Hasina. Simultaneously, different professional bodies – doctors, engineers, teachers, journalists, scientists, civil servants – have been split into two camps/groups blindly loyal (partisan allegiance) to either BNP or AL. The whole nation now seems to be divided into two poles. Even the educational institutions aren’t free from this polluted culture of politics that resulted in about 151 killings on campuses in the last 48 years. According to the recent newspaper reports, none of these cases has been resolved. And the nature of these killings has taken a more dreadful/fearsome turn in the last two decades because the student wings (Chattra League, Chattra Dal and Chattra Shibir) – when in power – have been given carte blanche (complete impunity). Even the ruling party’s student leaders/activists are pampered by the university authorities mostly accused of conniving at their wrongdoings. Sometimes, university campus is considered a haven for those activists who turn out to be drug dealers, perpetrators, extortionists, killers and demons.

In fact, the “culture of impunity” has crippled the State governance which has almost failed to ensure the rule of law in the country. This is very unfortunate and unfair that the leaders/activists of BCL are allegedly involved in extortion, tender manipulation, staff recruitment trade and other misdeeds at educational institutions, but the authorities look nonchalant and hardly take any stern action against them. However, this has been a positive gesture on part of the Prime Minister Sheikh Hasina who has recently expelled president and secretary (Shobhon and Rabbani), from Bangladesh Chattra League (BCL), due to their alleged involvement in extortion ahead of huge development works at Jahangirnagar University. It was reported that they demanded 4-5% commission (fair share) of the development fund/budget amounting to about BDT 1,445 crore. If this is a phenomenon of the existing student politics, should not the guardians worry about the safety of their children sent to public universities? Yet, the dreadful murder of Abrar is haunting parents, guardians, sincere academics and innocent students (not blindly loyal to any political party).

We have also observed that the student wings of major powerful political parties have failed to contribute positively to the recent student movements – road safety (we want justice) and quota reform in public services. Rather, the BCL activists stigmatized the students who participated in the movements which were mainly led by the general students from various educational institutions. Even they mercilessly attacked some students and journalists to subdue the just protests, and thus lost their credibility or acceptability. In fact, the ruling party’s student wing stood against the students’ logical demands which were hugely supported by the people in general. Is this student politics we want to see at universities?

Nowadays most of the people are averse to student politics, and this aversion is mounting gradually. Since the political parties – especially when they are in power – turn the student activists into pawns for their own benefits or gains, it is their responsibility to make their stand very clear so that the students can’t get involved in partisan politics using the banners or the images of the heads of mainstream political parties. All the politicians irrespective of parties should reach a consensus immediately and pledge that they won’t ruin the students’ future and intervene in the autonomy of the universities. Otherwise, the universities might encounter a dark period in near future.

Though the killing of Abrar is very painful, this cruel incident is not an aberration. This is evidently ominous that such a heinous act happened at an esteemed higher education institution. And this is because of the continuous shrinking of democratic space, lack of tolerance in society, misuse of power, absence of accountability and good governance in all spheres. The ruling party politicians and its supporters/activists should keep in mind that any dissent is not labeled as an anti-government or unpatriotic act. They should handle this with political wit and reasoned argument. A truly educated and conscious citizen should be critical of the government’s wrong policy – if there’s any. That doesn’t mean that he/she is conspiring to topple the government. This is called freedom of expression/opinion. Our politicians need to be more sensitive and democratic so that people can enjoy freedom of speech enshrined in the Constitution of Bangladesh (Article 39).

Now it’s time to seriously rethink student politics and sever the partisan ties of student wings with the national political parties. This unholy “nexus” (blind partisan allegiance) has proved to be detrimental. Students have right to get involved in politics on campus, but it has to be exercised by the students and for the students. Let the students think critically and independently. Let them talk freely about the government, its policies (governance, education, health, economy, business, IT, environment, energy, climate change, development works, etc.) and world politics. Otherwise, the country will be devoid of dedicated leaders – truly efficient, courageously intelligent, reliably patriotic and politically knowledgeable – in future.

Without addressing the root causes of degeneration of the present-day student politics, only a ban on the activities of student-led political organizations on BUET campus (announced by the university authorities on 11 October) will not work. A strong political will is imperative, and – at the same time – the university administration must have the core responsibilities to create a safe, congenial academic environment for the students. Also, it is important that the public universities are free from shackles of politicization and allowed to function properly to ensure students’ welfare and safety. The administrations of all universities need to make sure the student politics is rid of partisan political affiliation and remains safe in the hands of the truly meritorious, conscious students having critical reasoning, leadership skill, tolerance and empathy. However, a comprehensive policy needs to be formulated to reshape student politics in a positive manner. There should be elected student unions/student governments at educational institutions. A total ban on student politics would be counterproductive in the long run.

Sheikh Nahid Neazy is associate professor and chair, Department of English, Stamford University Bangladesh. He also writes for the national English dailies. He can be reached at: nahidneazy@yahoo.com