You are here
Home > Tech > Other > Progressing in human development index, lagging in innovation (Part 1)

This month couple of news came into highlights regarding the position of Bangladesh in certain criterion in global/regional scale.

First news was a positive one; Bangladesh has moved up three spots and ranked 139th in Human Development Index (HDI) 2015 due to the remarkable progress it had made in many socio-economic areas, including life expectancy and per capita income. Devised and launched in 1990, HDI is a measure for assessing progress in three basic dimensions of human development: a long and healthy life, access to knowledge, and access to decent standard living. Over the years, the HDI has served as a comparative tool of excellence, and as a reliable platform for vigorous public debates on national priorities. Human development data, analysis and reporting have been at the heart of this paradigm.

According to the report, which is published annually, Bangladesh is categorized as “medium human development” country with HDI value stood at 0.579 in 2015, which increased from 0.545 in 2010. The HDI value of Bangladesh was 0.468 in 2000 and 0.386 in 1990, clearly showing an upward trend in human development in the country. The report also reveals a higher average annual HDI growth rate of Bangladesh (1.64 per cent) during 1990-2015 compared to all other South Asian countries, including India (1.52 per cent).

Now let us look at the second news, which is not that positive.Bangladesh has been ranked as the least innovative country in Asia according to the Global Innovation Index 2018 report. Published in July 2018, the report analyses the energy innovation landscape of the next decade and identifies possible breakthroughs in fields such as energy production, storage, distribution, and consumption. It also looks at how breakthrough innovation occurs at the grassroots level and describes how small-scale renewable systems are on the rise. 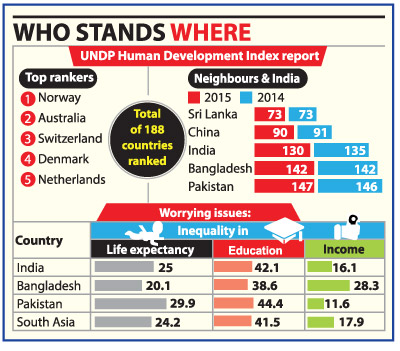 Bangladesh along with Myanmar and Pakistan sustained growth foreseen to 5 per cent in 2018 and 2019, the report said. Meanwhile, Singapore, South Korea and Japan are the most innovative countries in Asia. Sri Lanka, Nepal, Pakistan and Bangladesh are the least innovative countries in Asia. As per the report, innovation in Asia can grow if increased protectionism — in particular protectionism that impacts technology-intensive sectors, IP, and knowledge flows across the board, could be contained. Such dynamics, as per the report, could create the basis for productive knowledge spillovers and opportunities for collaboration and the generation of new knowledge and innovation.

While we can be happy with significant achivements in human development index, it remains a point of concern about such lower position in innovation index. Particularly, as during last one decade there have been extensive endeavours going on in the country regarding digitalization in all arena.

While there can comprehensive study and analysis about the background cause of this, today let us look from a simple perspective how much real innovation is taking place in the country. All around the year we are observing proposition, launching or creation of new products or services. A significant portion of these can be business viable, innovative and beneficiary for common people. However, majority of these are actually being built on the basis of some existing platform (through customization), which is actually the best available and optimized way, unless there is tangible demand of innovative solution.

Obviously, there is no doubt about the creativity, merit and capability of our people. Infact, human resource is the best asset of our country. This has been clearly reflected through our significant development in “Human Development Index”. Question is how much we are being able to utilize this asset for innovation? This will be discussed in the next part of this article series.