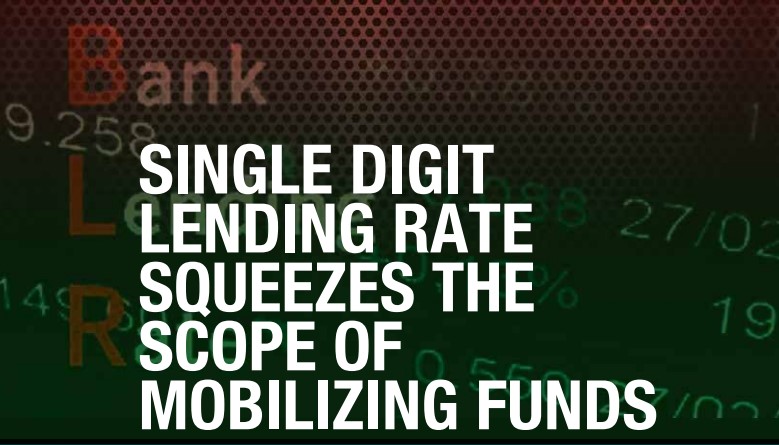 Implementing single digit interest rate is turning out to be a double edged sword as it is discouraging people from saving, creating temporary deposit crisis in banks and squeezing lending, said the experts concerned with the banking sector.

Bangladesh Bank—the regulator of the banks of the country—too said in an analysis that such rate is “challenging” for mobilizing funds from the public.

The government is going to implement the single digit interest rate from April 1. It means the all the scheduled banks will be able to charge a maximum nine percent interest rate for lending, and six percent for deposit.

It was set to be implemented from January last. But later it was deferred for unavoidable reasons.

Some of the commercial banks have already started providing not more than six percent for savings from February 1 as part of their preparation to usher in nine percent lending rate from April.

This move by the commercial banks of the country has prompted a flurry of savers to withdraw their funds. The savers are looking to park the funds with banks that are yet to bring down their interest rate.

As per the Association of Bankers, Bangladesh (ABB) decision, banks will not follow the six percent interest rate for deposit pension schemes (DPS), where savers park a specific amount of money every month and get a lump sum after a certain period.

Most of the experts concerned with the banking industry said, they can lend at a rate of nine percent. But they are concerned about collecting funds at a rate of six percent at a time when the prevailing rate of inflation is around six percent.

“We’ve raised the issue of low interest rate on deposits in the meeting with the governor of the central bank of Bangladesh,” said Ali Reza Iftekhar, chairman of the ABB, a group of top bankers from the country’s 59 commercial banks.

Iftekhar said banks have already executed the government order. “But the issue of deposit is a matter of the people whether they will do it or not,” he said adding that this [procurement of fund from people] is really a challenging task for the bankers.

He said, the rate of inflation now hovers around six percent and the depositors will not gain, if the deposit rate is 6 percent in the banking channel.

The ABB president however, said the promised government funds to the private banks might ease the situation.

Arfan Ali, managing director of Bank Asia said, “Without a balanced cash flow, which I would say is still absent, it will be not be able to bring down the interest rate soon.”

Nazrul Islam Mazumder, Bangladesh Association of Bankers (BAB) Chairman however said the bankers have agreed with the Bangladesh Bank to reduce the deposit and lending rate.

“Now if they said, it is not possible to collect the fund with such deposit rate, it will not make any sense. They shouldn’t have agreed with the government at the first place about the single digit lending rate,” he said.

What the central bank analysis said

Meanwhile, the Bangladesh Bank analysis said deposit rate will decline if lending rate is set at nine percent, and this will discourage depositors from keeping their deposits in banks.

However, foreign banks’ interest rate on deposit is comparatively much low, which means deposit collection is possible even in low rate.

Data from the Bangladesh Bank show that deposit growth saw a sharp fall in October last year to 8.86 percent year-on-year, which was in double digits several months back.

The report said single digit interest rate will hurt credit inflow to the private sector as banks will be reluctant to lend at low cost. However, low lending rate will help businessmen cut their operational costs.

Import growth fell by 5.26 percent in the first five months of the current fiscal year while export declined by 7.51 percent, according to the central bank data.

The single digit interest rate will not hamper remittance inflow as the two percent cash incentive keeps the flow strong, the report said.

It said inter-bank deposit will not be affected much if government mandates autonomous and semi-autonomous bodies to keep deposit in private banks at a certain rate.

Meanwhile, the Ministry of Finance has declared that government organisations will get six percent interest on their deposits in private banks, and 5.5 percent in state-owned banks.

A circular issued on January 20 in this regard also said the autonomous and semi-autonomous bodies can deposit 50 percent of their funds allocated under the Annual Development Programme in private banks and non-banking financial institutions.

On December 1 last year, the Bangladesh Bank formed a committee to find a way to cut interest rate to single digit, as private banks could not lower their lending rates even a year after promising to do so.

The committee, headed by a deputy governor of the central bank, placed the report to the board on December 24, recommending single digit interest rate only for the manufacturing sector.

The board later asked the committee to submit a revised report after doing an in-depth analysis of the impacts of implementing single digit interest rate.

The interest rate capping would weaken the banks by restraining their ability to fix adequate pricing of risks amid poor lending practices and a weak bad loan recovery framework in the country. This would likely lead to further acceleration in the accumulation of default loan at both state owned and private commercial banks.

The December figure says default loan came down to 9.19 percent from a decade-high 12 percent in September last year.

If the rescheduled amount is considered, the country’s default loan would shoot up to 16.49 percent of September’s total loan.

“On the whole, we highlight that the government’s persistent intervention in the banking sector would raise the risk of another bank run in Bangladesh due to a loss in depositor confidence. The most recent example of this was panic withdrawals in March 2018 following irregularities that were uncovered during Bangladesh Bank’s investigation into the Farmer’s Bank Limited (now known as Padma Bank) and NRB Commercial Bank (NRBCB),” Fitch said in its report.

The government is going to implement single digit interest rate at 9 percent from 1st April. Some banks have already brought down deposit rate at 6 percent as part of the plan of implementing single digit lending rate.

Fitch apprehended that the implementation of the single digit lending rate will be delayed further beyond April due to persistent pushback from private commercial banks.

Private banks have already put off the interest rate adjustment for more than a year which points toward an inability of the authorities to enforce the regulation and suggests that the implementation of the 9 percent lending interest rate cap is likely to remain slow, the report said.

“While the actual implementation timeline is uncertain, we believe that authorities would eventually tighten its grip on the industry and push through this initiative so as to continue propelling real GDP growth above 8 percent following an 8.2 percent growth rate in FY2018/19.”

“We believe that higher interest rates are likely due to wide credit spreads reflecting the risky lending environment in Bangladesh.”

“While there is an alternative scenario whereby banks cut back on loan issuances to reduce their risk exposure, which would slow the growth of default loans, we believe that the government is likely to step in to spearhead higher loan growth to attain its ambitious economic growth targets, which would once again put the industry on course for a continued surge in default loans,” according to the report.

A cap on the interest rates for these loans would inhibit adequate risk pricing and likely give perverse incentives to less creditworthy borrowers as a result. While lower interest rates would support a recovery in loan growth, which slowed to 10.4 percent y-o-y in December 2019, from 14.8 percent y-o-y a year ago. The acceleration in loan issuances is likely to see a renewed build-up of default loans and correspondingly, provisioning, which would weigh on earnings and the profitability of the banking sector as a whole, the report said.

Fitch apprehended that an eventual implementation of interest rate cap will pose severe downside risk to Bangladesh’s financial stability, and worsen the risk of a run on deposits.

The capping lending rate will also worsen asset quality in Bangladesh’s banking sector. This is likely to see the dismal asset quality situation of state banks’ spill over to the relatively healthier private banks.