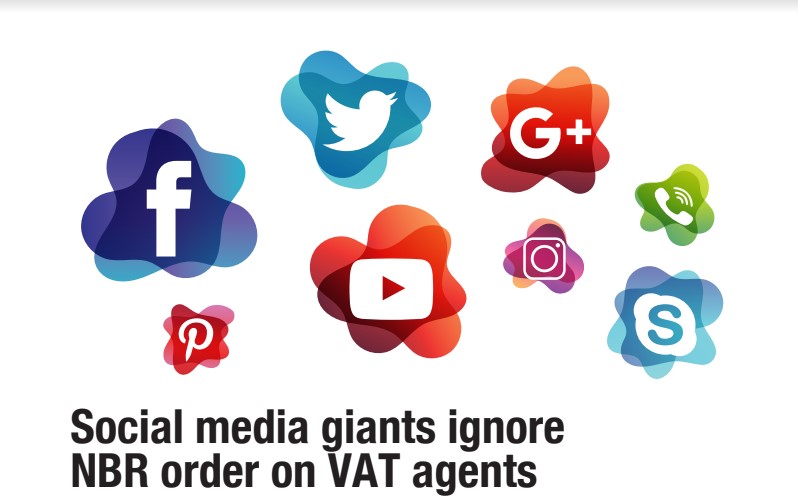 Social media giants like Facebook, Google and YouTube are not interested in appointing VAT agents in Bangladesh though the National Board of Revenue (NBR) has asked them to appoint VAT agents and pay 15 per cent VAT on advertisement revenue to the government.

“Two months have elapsed since the directive was issued to appoint VAT agents, but the companies have not yet expressed their interest,” said an NBR official, requesting anonymity.

“Whether they are interested or not, they have to appoint VAT agents,” the NBR official said, adding, “It is a legal procedure. They are doing business here, so they have to obey the rules of the country.”

According to a statement submitted by the BTRC in the court, the three mobile phone operators—Grameenphone, Robi and Banglalink—spent some Tk. 9,000 crore to advertise on digital platforms in the past five years.

The NBR said, “From the records filed by the BTRC in the court, we understand that the business here is not small and all these institutions must be brought under the VAT net.”

In the proposed budget for FY2019–20, the government had reduced VAT from 15 per cent to 7.5 per cent for advertising and services offered on digital platforms, but has kept it at 15 per cent in the final budget.

Earlier, the NBR had directed foreign platforms to appoint local VAT agents to broadcast advertisements in Bangladesh from the next fiscal year. The local agents would have to pay 15 per cent VAT on behalf of the foreign entities, it had said.

The revenue authorities gave the directive to rev up the implementation of the VAT and Supplementary Duty Act, 2012, from July 1. The NBR has taken the step to mop up untaxed money from online advertising, which is said to have been siphoned off from the country’s economy.

In November 2017, the Newspaper Owners’ Association of Bangladesh (NOAB) sent a letter to the finance ministry, the central bank and the NBR, voicing its grievances over the rise in digital advertisements.

Facebook and Google earn a huge amount of money from digital advertisements, but do not pay any tax, the association complained.

The two tech giants—Facebook and Google—have no office in Bangladesh and hence they remain outside the purview of Bangladesh’s laws. But it is mandatory for every company that wants to do business in any country to comply with the local laws.

To bring the income of the tech companies under the tax net, the NBR slapped a 15 per cent withholding tax this fiscal year on ‘advertisement income or digital marketing’. In addition, a 15 per cent VAT is to be paid by the advertisers on the bills served by digital companies.