You are here
Home > Entertainment > The Big Short 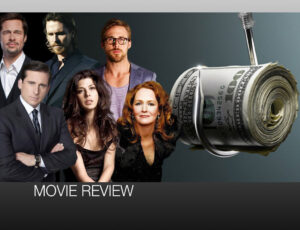 What comes to your mind when you hear about a movie that is even remotely related to wall street? Bunch of young people walking into the office wearing suits, not even looking at each other and others busy crunching numbers and dealing with people over the phone? Going to a bar, strip club after work and getting drunk with the commission they got after trading good deals for their respective firms the whole day? Well, The Big Short, directed by Andy McKay is totally different than what you think about a film related to Wall street. First things first, if you are looking for a fast paced and entertaining two and a half hours like The Wolf of Wall Street, this movie is totally not for you. This movie is based on the book The Big Short: Inside the Doomsday Machine by Michael Lewis where the plot is based on the financial crisis of 2007-2008 caused by the United States housing bubble.

The story begins with Michael Burry, played by Christian Bale who is a hedge fund manager finding that housing market of United States is extremely unstable and it will collapse in the 2nd quarter of 2007. He then creates a credit default swap market where he could ‘short’ or bet against the mortgage backed securities or MBS for profit.

In short, if the market fails, Michael Burry would be able to make a fortune because he’s betting against the housing market. Meanwhile, Jared Vennet, a salesman at Deutsche Bank, played by Ryan Gosling happens to find out Michael Burry’s plan and was the first one to understand the whole analysis. When he decides to sell the swaps where his clients would benefit when the underlying bonds fail, a misplaced call alerts the Front Point hedge fund manager, Mark Baum played by Steve Carell. Vennet meets Mark and his team and offered them these swaps which he compared to ‘a fire insurance on a burning house’.

Although, Mark found quite unbelievable what Vennet said but he eventually bought those swaps (mostly because of a personal reason which is later revealed in the movie) after talking to two mortgage brokers and a stripper in Miami. The whole movie gets more interesting when young investors Charlie Geller and Jamie Shipley owner of Brownfield Fund finds the prospectus created by Jared Vennet, based on which Mark Baum and his team bought the swaps earlier in the movie.

To confirm its authenticity, they contact Ben Rickert. played by Brad Pitt, who is a retired trader and also happened to be Jamie and Charlie’s neighbor. After this point, the movie takes a turn and catches up the speed where everything goes according to Michael Burry’s assumption till one point where all of the lead characters in this movie were getting impatient because adjustable rate mortgages were rising and market was not collapsing. That part is one of the reasons why this movie is one of the best because that is when the audience would get to realize that -there are no heroes in this movie and everyone is trying to seize the opportunity of making money; some of them by lying and some of them by taking advantages of those lies. 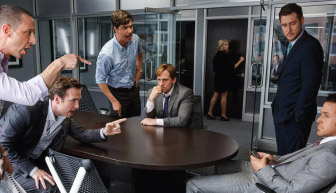 The plot is the real hero of this movie because it is based on a true story which happened just a few years ago. There are surely some low points in this movie like Brad Pitt and Ryan Gosling getting less than 15 minutes of screen time, not focusing enough on the supporting characters etc. Despite of these forgivable low points, this movie stands out for many reasons.

First of all, the cast includes Brad Pitt, Christian Bale, Ryan Gosling and Steve Carell who are undoubtedly among the finest actors of this generation. Christian Bale and Steve Carell were outstanding and their acting was a treat to the eyes alongside John Magaro and Finn Wittrock who played Charlie Geller and Jamie Shipley respectively. Secondly, the storytelling is topnotch especially when it came to make people understand financial terms like Collateralized Debt Obligation (CDO), Mortgage Backed Securities (MBS), Sub-prime Mortgage, Synthetic CDO, Credit default swap etc.

These terms were explained through the cameos played by celebrities like Margot Robbie, Selena Gomez, Chef Anthony Bourdain and Economist Richard Thaler throughout the whole movie. Besides, Ryan Gosling and others breaking the fourth wall added humor in an intense drama film which justified the tag ‘Comedy’ in its genre. Not to mention, the narration by Ryan Gosling was just perfect considering the tone of the whole movie.

The best part was the climax and the epilogue. The climax showed that the lead characters made a fortune off the misery of common people which we supported throughout the whole movie subconsciously but hated the banks too at the same time which is why this film has gone under the list of 1001 movies you must see before you die. The epilogue showed that the banks are still selling CDO’s which caused the fall of the whole economy in the first place under a new name: a ‘bespoke tranche opportunity’ summarizing the whole fraudulent system, giving us a food for thought.