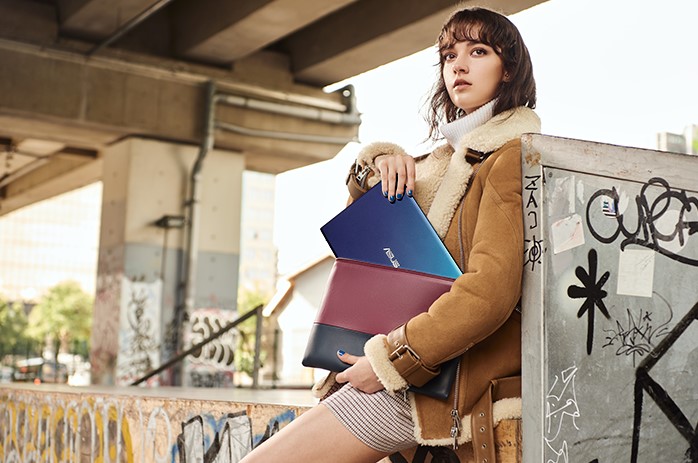 ASUS has been positioning VivoBook as one of their affordable laptop series for a long time. However, the 2019 edition of VivoBook is surprisingly premium with vibrant colorful design and premium features that traditionally found on more expensive laptops. The VivoBook 14 and 15 Series (X412 / X512) comes with 2 display sizes – 14 and 15.6 inch respectively. Both the laptops are more compact and lightweight than its previous generation. Their slim-bezel designs helped reduce overall footprint compared to standard laptops with the same screen size. This makes VivoBook more portable, with dimensions that slip easily into a backpack. Both the notebooks feature the four-sided frameless display, ASUS named it as “NanoEdge” display that ensures up to 87% screen-to-body ratio – which feels quite impressive considering it as one of the budget notebook series of the market.

One of the interesting features of this Notebook is “ErgoLift”. We have seen this feature before in ASUS ZenBook or VivoBook S series; the feature is now available for this mainstream notebook models. The “ErgoLift” feature literally lift the upper side of the base that securely holds the display steady at any angle, while slightly elevating the keyboard by up to 3° for a more comfortable typing position.

The laptops feature a variety of ports including USB 3.1 Type-A, USB Type-C™ (USB-C™), HDMI output, an audio combo jack for headphones and microphones, and a microSD card reader.

The latest VivoBook series laptops are powered by up to an 8th Generation Intel Core processors. You will have options to choose from Intel Core i3 to core i7 processors with different set of configurations based on your need. For powerful and efficient performance, the VivoBook series comes with up to 8 GB DDR 4 Ram paired with up to 2 GB of NVIDIA GeForce MX series graphics for gaming on the go. The notebook also features dual storage design, that gives the used to individually upgrade the Storage with HDD and SSD. The VivoBook series comes with genuine windows 10 OS pre-installed. One of the most importantsellingpoints of this VivoBook series is its bold color options. The VivoBook series is available in 3 Colors in Bangladesh – Slate Grey, Transparent Silver and Peacock Blue. It was first announced at CES 2019.

What’s in the box?