You are here
Home > Top Story > ‘The financial crises are happening because of the big defaulters, not because of SMEs’ 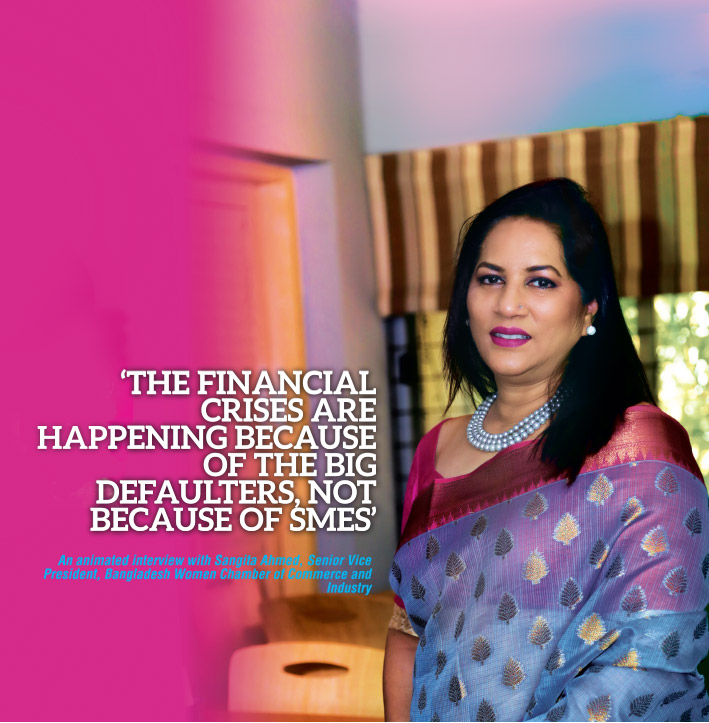 Anyone watching BTV English News bulletin will immediately recognize Sangita Ahmed. But media personality is but one front of Ms Ahmed’s multi-faceted professional engagements. A passionate entrepreneur, Sangita Ahmed has been involved in business since her early 20s, as we find out during our interview with her.

A much warmer person than she is allowed to let out at the traditionally formal ‘News at Ten’ for Bangladesh Television, Sangita Ahmed talked about, among other things, how she started her restaurant business, challenges for women and her role at Agrani Bank Ltd, where she is a former director. Here is the excerpt from our conversation with her at her Gulshan outlet of ‘Time Out’:

FINTECH: Please tell us about your background and career.

Sangita :Even though I got married quite early in life, I did not stop studying. I completed my education while I was a house wife and a young mother. My first experience of entrepreneurship was opening a boutique named Top Girl in Gulshan 1 DCC Market with my mother, while I was in my early 20s. Top Girl was very successful and we ran it for five years. After that I went abroad, where I started a daycare center which was also successful. 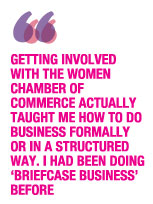 After coming back to Bangladesh I completed my masters in 1995. I was a mother of two by then, my younger son was four at that time. During that time,I applied to Bangladesh Television to read the English news. It was my childhood dream to be a news caster. My application sat with them for two years, I thought it got lost and I had lost my chance of becoming a newscaster! I was called at last and I started reading in the shorter news segments in 1997. After a year I was given the prime time news, at 10pm. It’s been 20 years since I started and I’m still presenting Prime Time news. In 1998, I got involved in documentary film narration and script writing. I was a literature student, so that helped me in writing too. My husband and I eventually started our own partnership media company AV Graph.

I joined Bangladesh Women Chamber of Commerce and Industry in June 2001, when I had been working fully in the media, as a general member. I became a director after six months. I’m currently the Senior Vice President of BWCCI. Getting involved with the Bangladesh Women Chamber of Commerce actually  taught me how to do business formally or in a structured way. I had been doing ‘briefcase business’ before –getting the profit, putting it in the bag and spending out of my bag! I learnt that you have to adopt the formal way for sustaining a business. That means doing correct paperwork, accounting, costing , taking out bank loans etc.

At that time a large chunk of our business was with Ekushey Television. My husband used to produce talk shows called ‘Boltey Cha’i and ‘Shorashori’. We did a lot of productions like that. And then ETV was shut down. That was a big blow for us. Me and my husband were 50-50 partners. The closing of ETV took away 70 percent of our business.

The Women Chamber had a business counseling desk and you could book a session for Tk200 for an hour. I actually did a session and what struck me was that you always have to do diversification of your business, because most business ventures get disrupted or go out of business for one reason or another. If you don’t diversify, then you can’t do business.

That inspired us to think about other things. At that time,we used to go to Mohammadpur camp for ‘chap’. So, myself, my husband, my younger sister and her husband came up with the idea of opening up a ‘chap’ restaurant in Gulshan. At that time there was no ‘chap’ restaurant in that area. That’s how we started ‘Time Out’. We started out with only two staff Mansur and Shahadat . We actually still have them with us after 17 years. 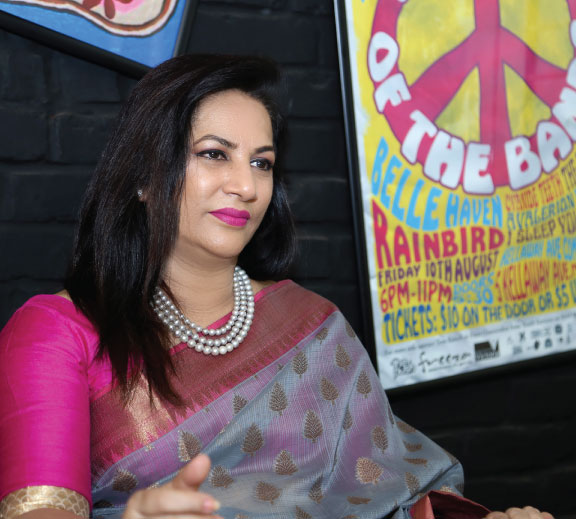 This business was successful. My husband and I personally worked at our restaurant. People used to recognize us and really appreciated our personal involvement in our own restaurant. Time Out started in November 2001 in the place where Pink City Gulshan 2 now stands. When the location got sold to developers it was another turning point for us. It was a big problem. My husband gave me the idea of leasing a place from BWCCI together with other women entrepreneurs who were startups. I discussed that at the Women Chamber and they took out lease for a five ‘katha’ plot in Gulshan 1. We started with ten small shops there. Time Out was there for seven years and after that, we started the branches in Banani and Gulshan. Me, my sister Samina Salman and my third partner Sangeeta Khan (my namesake) have been together as partners for the past 13 years . People often ask me why we don’t expand. We don’t do it because we want to keep the personal supervision that we are able to do now. You can’t do that if you expand too much.

FINTECH: How did you become involved in banks?

Sangita : Since 2005, we campaigned with Bangladesh Bank for single digit interest and non-collateral loans for women. Women traditionally do not have capital; how can they provide security? That was our rationale. In 2007 the Bangladesh Bank issued a directive that women must be sanctioned loans from a special fund, without security. The interest was 11 percent then, and slowly came down as low as 9 percent. Another directive was issued at that time requiring all government banks to have at least one woman-director in the board to encourage women entrepreneurs.

I was the president of the Women Chamber at that time and the government appointed me as a director of Janata Bank Ltd. I was there for three years, and then I joined Agrani Bank Ltd in 2016.

This has allowed me to look from another perspective, from the other side, meaning from the investor’s side. We have five thousand women entrepreneurs with the Bangladesh Women Chamber and we have connected them with Agrani Bank. One of the useful things about government banks is that they have reach in the rural areas, which private banks don’t have. Agrani Bank has over 900 branches across the country. So, this connection will enable women in the rural areas to get loans. That is one of my main roles in the board, to create SME and women entrepreneur friendly environment in the bank.

FINTECH: All banks have SME products and services now. But in reality SMEs are still seen as high risks. How much the banks are actually able to serve SMEs, given the reality of lack of security?

Sangita: Due diligence is needed for big businesses too, not just SMEs. The financial crises are happening because of the big defaulters, not because of SMEs. So, for instance, in the last fiscal year Agrani Bank sanctioned 10 percent of its total loan budget, to women entrepreneurs. That came to 323 crore.

The bank was able to give out from it only 52% of the allocation . The reason I think, the women that are doing business in the rural areas, they are not being welcomed by the banks. Banks are only interested in big loan takers

So, we are trying to persuade at the board level to go for the mass. Give out loan only to good loan takers. If one big loan fails, that’s a huge loss. Whereas, if one SME fails that’s not going to make any huge impact. The Banks are now concentrating on the SME sector, as the government and Bangladesh Bank are giving it much importance.

FINTECH: You just mentioned non-performing loans in the government banks. How seriously is this treated at the policy making level?

Sangita: It’s being taken very seriously right now. One big default changes the total percentage of NPL’s. In the last two years since I have been on the board under the leadership of our chairman Dr Zaid Bakht, we adopted a number of policies toward reducing the number of classified loans.. The thing about policies like that is that you don’t see the outcome overnight. It takes time and we have to be persistent and consistent.

The number of our classified loans has decreased compared to last fiscal year. The number of branches in loss dropped from 78, to 43 branches. This is the figure for the last fiscal year. We implemented the policies and now we can see the results. Sometimes you hear in the media that we have 43 loss-making branches. But they also should say that we brought it down to 43 from 78. 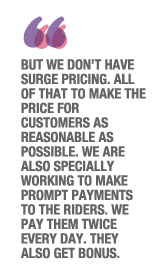 FINTECH: So, you attribute that drop to your policy?

Sangita: Yes, of course. It’s the implementation of the policies. In every board meeting we specifically look into the causes and remedies for the branches that are in loss. We are really giving personal attention to this. We have a dynamic chairman. In the past year we brought down classified loan from 29 percent to 17 percent. 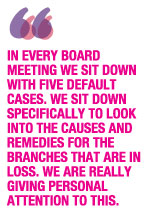 S Ahmed: The culture has changed. When I was young we didn’t think about going out for iftar or sehri. It was inconceivable. Iftar time meant everyone will be back to home one hour before iftar. Amma will prepare the table and everyone will sit together for the iftar. But now, I don’t think people have iftar at home even two days, I think that includes me too. So, that’s a big cultural shift. People not don’t have time to make ‘piyaju’ at home. So, that means the restaurant scene has experienced a huge increase in demand. The whole culture has changed. Even ten years ago, no one on God’s Earth went out to restaurant to have sehri. This means there has been economic developments. People have more purchasing power.

As for running ‘Time Out’, our philosophy is to treat everyone involved as partners. Our staff are not our employees; they are part of a family. We have a picnic coming up, and the restaurant will be closed on that day. Many of our staff members are here for 16, 17 years now. We give five percent of the profit to them, in addition to their salary. They are five percent shareholders. They run the restaurant and if they are satisfied, the business will run well.

FINTECH: Thank you for talking to Fintech.

Sangita: You are welcome. ■