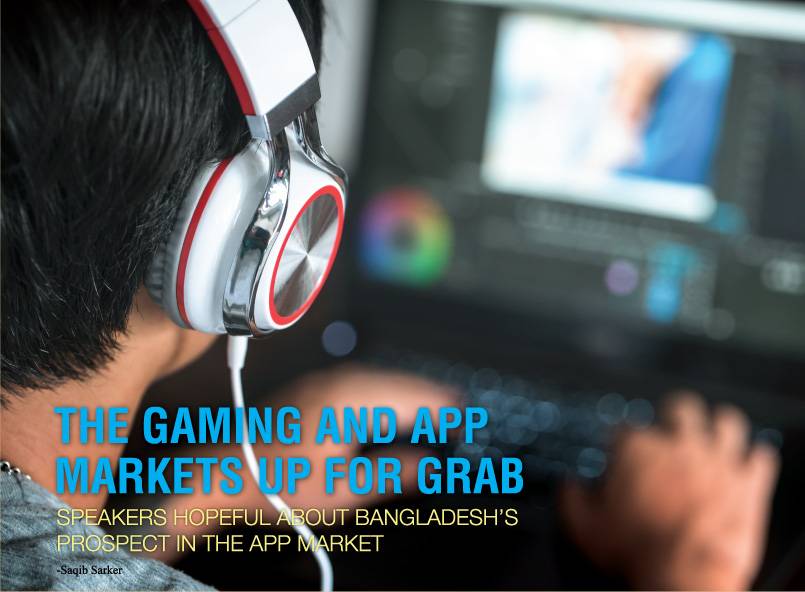 With smartphones replacing the feature phones in geometric fashions across the country, the mobile app market is up there for grabbing for the local software developers. Experts concerned with the sector however said that to do so, the developers have to tackle several hindrances.

On the second day of SoftExpo 2017, a seminar titled ‘Mobile Application; Monetization is the Key’ was organized at Media Bazaar hall of Bangabandhu International Conference Centre where relevant professionals in the field shed light on the current realities of the mobile application market and Bangladesh’s position in the business.

What the market looks like and challenges in monetization

Speaking on the occasion, Rashad Kabir, managing director, Dream 71 said that the current gaming market worldwide worth 99.6 billion dollars. “How much of it have we captured? I had a session in the morning where I asked people how many Bangladeshi apps they have on their phones. The result was less than twenty-five percent.”

“So, the fact is that we have to build up strategy to capture this market,” said Rashad Kabir. 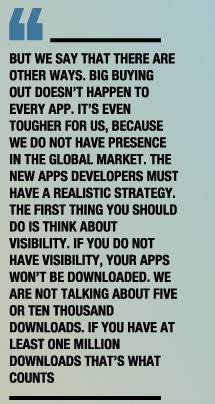 Mohammad Shahjalal, Managing Director, 8Pears Solutions Limited said that for capturing the apps market, there is no option but to form a proper monetization planning. “Without having a payment getaway, we will not be able to attract the app developers because their main revenue from developing apps comes from the advertisements.”

“If I want to place an advertisement of an e-commerce site in an app, I will not be able to do that unless I have a foreign account. This is de-motivating a number of app developers” he said adding that the government is working to resolve the problem. “Hopefully it will be solved soon,” he said.

Stressing on the need for proper data analysis, he said, “Currently, we also do not have any data analysis company for surveying local data, which we call big data solution. The most important thing for the next generation, in fact for this generation, is to work with big data. If we do not analyse big data we wouldn’t have the information through which you can monetize,” Shahjalal added.

Speaking on the occasion, Nabila Rahman, Managing Director of Aurko Technologies Ltd said that many of the app developers of the country has an idea that their developed app will be purchased by the big corporation and that has become their ultimate goal-a large sell out.

“The truth is, big buying out doesn’t happen to every app. It’s even tougher for us, because we do not have presence in the global market. The new apps developers must have a realistic strategy. The first thing you should do is to think about visibility. If you do not have visibility, your apps won’t be downloaded. We are not talking about five or ten thousand downloads. If you have at least one million downloads that’s what counts,” she added.

She said that proper advertisement strategy can achieve that for the app developers. “You have to keep 35 percent of your total budget for your visibility, your promotion and mobile digital ads. Last year, around six billion dollars were spent just on advertising for apps in the US,” said Nabila Rahman.

Dewan Shuvo, CEO of Chalo said that app development is not a static thing. He said, “We update our app every week. I am even looking to do more frequent updates. In developing my app I focused on two things mainly: the tech and service.”

Mohammad Xane Alam Raabid, project consultant of the ‘Skill Development for Mobile Games and Applications’ project of the ICT Division of the government said that the ICT division has taken this project to systematically build the mobile game development sector.

This project has three main components. The first component is resource supply and development. Most of the young mobile game developers commonly suffer from scarcity of resources, both hardware and software.

“So, we are creating thirty-eight labs for mobile games and apps across the country. These labs will give access to all potential developers to come in and use the facility, after the necessary authentication. Every kinds of resource will be available there for developing games and apps,” he said.

The second component is apt manpower. “We are training sixteen thousand and one hundred youth in mobile games and application developments in different topics and areas, in order to make them industry ready.”

Raabid said that the third component is proper market research for gaming ideas. “We are formulating plan for bringing small and medium companies into mobile gaming sector and we are finding ways to fund them.”

He said that from the project, they organize some idea innovation workshops soon. After developing those apps the ICT Division will buy those from the developers and later give those back to the developers for further development.

“The government will not retain the ownership. The developers will own those apps and can upgrade those and release those in the market. They will be the earner of the revenue generated from the games” Raabid added.

Salim Khan, Deputy Project Director, Skill Development for Mobile Games and Applications said, “The government is not here to do business. It is trying to promote business. Government can work as the catalyst. This project has two hundred and eighty-one crore taka allotted for it. The government wants result from it.”

The chief guest for the session, Sushant Kumar Saha, Additional Secretary, ICT Division, said that it took some time for him to convince the ministry about the feasibility of the app skill development project. But he said government is fully committed to this. “The ICT Division always stands with the industry. If you can make good products you will always find buyer,” the Additional Secretary said.

“Tell us what you need and we will provide the training. If you need to attend an event somewhere we will send you there. If you think we can expand our market by going there we will arrange that for you. We are already doing it.”