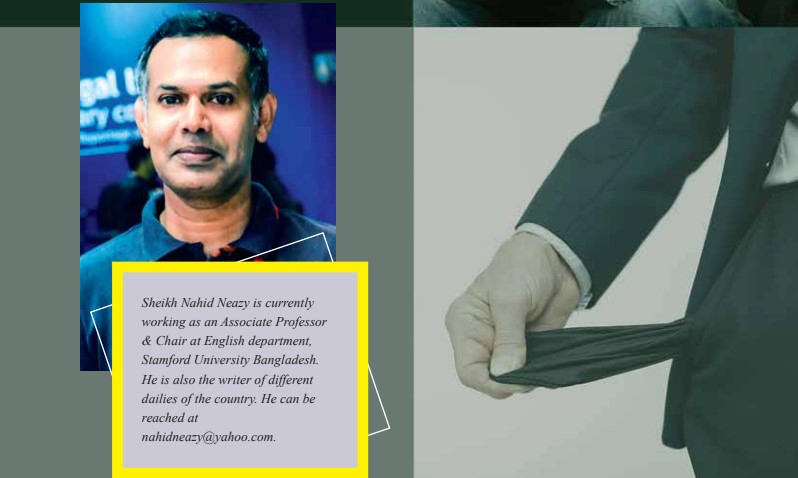 It’s been a good initiative that the new finance minister proposed to allocate TK 100 crore in the budget 2019-20 for the training and employment of a specific group of youth, although the government will have to face challenges to reduce or eliminate unemployment by 2030 by generating three crore jobs. According to the latest Labour Force Survey (LFS) by the Bangladesh Bureau of Statistics (BBS), the rate of unemployment among persons with education of up to tertiary level rose to 11.2 percent in fiscal 2016-17 from nine percent a year earlier. A recent study titled “Investing on Young People: What does the Budget reflect?” – carried out by ActionAid Bangladesh was shared at a discussion in Economic Reporters’ Forum (ERF) of Dhaka on 21 May 2019. The study shows that there are more than 2 crore employed young people in Bangladesh, representing 33.5 percent of the workforce. Nearly 90 percent of the youth in Bangladesh are employed in the informal sector. Overall 79.5 percent of the unemployed are youths. More than 46 percent of the total unemployed youths are university graduates. The Centre for Policy Dialogue (CPD), a local think-tank, also noted the rising unemployment rate among the relatively more educated labour force. But, a large number of foreigners – mainly from India and Sri Lanka – are working in Bangladesh’s industrial sectors including textiles and garments. This is happening because our local labour force lacks required technical and managerial skills which are much needed in the era of the Fourth Industrial Revolution. Experts blame the absence of quality education and a skilled workforce as the main causes for not finding the right people for the jobs. Mohammad Abu Eusuf, director of the Centre on Budget and Policy at Dhaka University, said, “Our education system is producing jobless graduates. But we need an education system linked with markets. If we want to achieve this target, we must spend more on education.” (The Daily Star, 14 June 2019)

The unemployment rate has gone up at a time when higher numbers of graduates are coming out of universities, and the economy is experiencing steady growth. According to the report — A little for the jobless (published in The Daily Star on 14 June 2019) — some 6 lakh students graduated from public and private universities in 2017. About 65 percent of Bangladesh’s population is between the age of 15 and 64 now. Former BGMEA president Anwar-ul Alam Chowdhury said, “The key problem is skills mismatch. We often find that many of the jobseekers can’t draft a simple letter. Even they don’t have enough knowledge on the subject in which they majored.” He also suggested the creation of a separate human resource ministry, which will conduct research and find out the skills the market demands. In a recent discussion held in Economic Reporters’ Forum (ERP) conference room, Dhaka, Rubana Huq — the newly elected president of BGMEA – said, “A large portion of the younger population seems to have low confidence, so the government should invest to motivate them.”

In an article titled “Crisis of Skills and Soaring Unemployment” – published in The Daily Star on July 15, 2018 – Dr. Biru Paksha Paul, former chief economist of Bangladesh Bank, rightly pointed out that many of our graduates lack skills which are required in the job market. In our growing economy, more than two million young people enter into the job market every year, and they are almost three times more likely to be unemployed than others. Many of them are ill-paid; and the situation for women is worse. Now question is – can the market/system generate as many jobs as required? If not, then what are the jobless youth doing? Does the government have the latest data of the number of jobless youth and the needs/demands of job market? In fact, the lack of placement policy and poor skill development initiatives from the government result in joblessness which is pushing the youth into a domain of desperation. And lack of skill-based education and irrelevant degrees not matching the needs of job market also contribute to their anxieties that are being compounded day by day.

In his article, Biru Paksha Paul – currently professor of Economics at the State University of New York at Corland – said, “We have produced millions of youths holding master’s degrees in Chemistry, Physics, Philosophy, History, Political Science, English and Literature. But most of them, if not all, want to be magistrates where power and money merge together without the need for any ready skills.” Can we deny this reality? Last year we observed that the demand for quota reform in government jobs was reportedly high from all quarters, especially from the students studying at colleges and universities. No doubt, this reform had long been due. And because of the discriminatory quota system, lots of meritorious students opting for civil services have been deprived over the years. But do our graduates have only option – government jobs (BCS or non-cadre) – for them? If not, then why does a student study Applied Chemistry or Physics? Why does a student want to study Business Administration or Pharmacy? Why does a graduate having MBBS degree want to be a police officer or magistrate? Why does a student want to be a customs officer/tax commissioner after graduating in Computer Science & Engineering/Civil Engineering/Electrical Engineering/Leather Technology? Why do most of the students have to sit for BCS exams after their graduation? Can’t the private sector jobs (mainly formal jobs or white-collar jobs) attract the graduates passing out of the universities? I reckon these questions need to be seriously addressed; simultaneously the government needs to seek answers to these questions if they really want to deal with the unemployment problem. Otherwise, the country will lack skilled human resources in private sector which will ultimately depend on the foreign workforce.

Students studying medical science or engineering are supposed to be doctors or engineers either in public or private sector. Isn’t it unlikely or unbecoming if they want to become police officers or magistrates? Even a Business graduate majoring in Finance or Marketing is found desperate to look for a government job (preferably BCS) though he/she is supposed to try to find a suitable job either in a financial institution/bank or any multi-national company. We know the reason why it happens. We have inherited a colonial mindset and are still bearing that legacy. But this has created a huge system loss. If we let a university graduate having MBBS or Engineering or MBA/M. Pharm. Degree become a BCS cadre (customs officer or magistrate), the nation will lose an efficient doctor/engineer/banker or a good pharmacist. And ultimately the country will badly lack their services. Besides, the government spends huge money (taxpayers’ money, of course) on a medical or engineering student reading in government medical college/engineering university. If the system loss continues, the country will not get the right people at right places. So the government needs to formulate a very clear and comprehensive policy to streamline the young people in the right direction of employment and utilize the human resources or human capital in a very effective manner.

In the existing education system, we don’t have much skill-based programs and value skill-based learning. It doesn’t mean that the youths don’t like learning skills. They are mostly discouraged to invest in acquiring skills when they find those credentials almost useless in job market. Besides, our parents/guardians/teachers encourage the children to pursue traditional degrees like BA/MA or MBBS/Engineering and want them to get white-collar jobs which give them social security and status in future. This is why the children grow up with a conventional notion that only the white-collar jobs are prestigious and lucrative. In our society no one would go for a one-year certificate course/diploma on Hotel Management/Tourism Management when she/he finds herself/himself jobless after graduation. At the same time, we are not sure whether or not the industry/employer is ready to take on these graduates having a diploma on the relevant field and offer them good salary. It is evident that there’s a huge gap between the industry and the educational institutions/colleges/universities offering degrees/diplomas/certificates.

Yet we are reluctant to go for vocational training or skill-based education to build up career as a hairdresser, tailor master, plumber, painter, chef, driver, receptionist, front-desk relationship associate, waiter/waitress in a five-star hotel or a salesperson in a super shop and etc. For these jobs – known as blue-collar jobs – we don’t need BA/MA or BBA/MBA degrees. If the employers offer good pay, I think our youths are ready to take up the challenges. We also feel shy of doing this kind of job (blue-collar jobs). Our mindset is that since we have university degrees, these jobs are not suitable for us. But do all of us have to go for BA/MA/MBA/M.Sc. certificates to get a job? We know that many graduates opt for odd jobs when they go abroad and choose to settle over there as immigrants (legal or illegal). Now it’s time to decolonize our mind and come out of shyness or prejudices and start thinking out of the box. Otherwise, we have to celebrate the state of being jobless and end up in frustration.

India had opened a separate Ministry for Human Resources and managed to assess the human resources requirement for existing and potential industrial sectors. The Ministry of Human Resources also shared the requirement with the Ministry of Education. Neither of our governments took such initiative. They don’t/can’t think this way because our government doesn’t or can’t foresee what will happen after its 5-year tenure. If the governments (including the previous ones) had consistently tried to reshape the traditional/colonial bureaucracy, valued meritocracy in jobs and upgraded educational system based on the needs/demands of industries, our mindset/psyche would have changed.

Last year in a press conference, when talking about the growing unemployment rate in Bangladesh, Dr Zahid Hussain – the lead economist of World Bank’s Dhaka office – said, “This is a structural mismatch. When we talk to relatives, they say there are not enough jobs. But when we talk to entrepreneurs, they say where are the people to hire?” (Source: The Daily Star on 27 April 2018). It shows that the quality of education in the existing system – particularly tertiary education – doesn’t match the needs of the current job market. The youth labour force (15 – 35 age) now stands at 5 crore or above. So the government should take the lead to work on ensuring quality education by upgrading the curriculum at all levels and also launch a separate Ministry for Human Resources which will make a database for assessing the needs of the industry and the number of students (graduates) passing out of the universities every year. This ministry would help implement National Skills Development Policy 2011 effectively and make a bridge between the educational institutions and the industry/job market as well.

Since the current unemployment rate has reached the highest level, particularly among the educated youths, both the government and the private-sector entrepreneurs should come forward to create more jobs (formal and informal) in both public and private sectors in the coming years. The government should also prioritise in upgrading education system (from primary to tertiary level) immediately, attract local/foreign investors efficiently and establish good governance seriously at all sectors. Last but not least, the budgetary allocation for the education sector should go up to 20 percent for the sustainable growth of the economy. If the government addresses the problem seriously and takes effective steps in generating more jobs in fiscal year 2019-20, the country’s economy will sustain its climbing growth, and our youths will get employed.