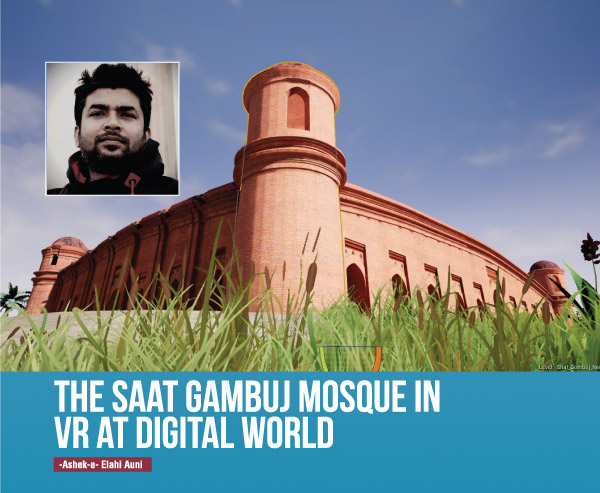 A young innovator and content maker Ahamed Jaman Sonjib has developed a Virtual Reality or VR tour of the national heritage Saat Gambuj Mosque in Bagerhat, which is set to be shown to the public at Digital World 2017, scheduled to take place from December 6 – 9.

Sonjib’s company Expressive Limited developed the VR tour to preserve the images of this historic site authentically, and Sonjib says this is not the end of their project. The idea is to rebuild the iconic and landmark historical establishments virtually and develop an archive.

They named the project is titled ‘Virtual Museum’.

Sonjib and his team are very concerned about the authenticity of the look and feel of historic sites they want to preserve. To make their capture authentic and true to history they consulted renowned archeologist Professor A K M Shahnewaj of Jahangirnagar University. Sonjib said that they have plans to involve more experts from different related fields.

“Our national museum can initiate a VR experience zone. Or VR museum can be a separate project all together,” Sonjib said to Fintech. He said that the museum can be
mobile and it can easily take the exhibit to the people because of the convenient the technology offers. There is also the opportunity to host this on a website that will enable people to watch from home.

Sonjib said that this is part of the current government’s goal of creating a ‘Digital Bangladesh’. Sonjib thinks that in the future VR tours of Sundarban and underwater will also be possible. “It doesn’t have to be limited to just sites. Historic events can also be presented,” he added.